We talk to BIM6x about their Revit RVT translator for ARCHICAD

Although some BIM vendors implemented a Revit translator this year, such as Vectorworks, they have all kept quite quiet about it. So when BIM6x issued a press release about their Revit translator plug-in for ARCHICAD, WorldCAD Access had to interview them. We spoke with Chris Clark, BIM6x ARCHICAD Solutions Director and Link Ellis, BIM6x ARCHICAD Technical Director.

(The plug-in is free, works only with ARCHICAD 21, and comes in a version each for Windows and MacOS. RVT is Revit's file format for its models, while RFA (Revit Families) is its format for sharing objects between projects, such as doors and windows.)

WorldCAD Access: Is your translator based on the work done by the Open Design Alliance?

WorldCAD Access: Why did you decide to write the translator?

BIM6X: We provide ARCHICAD sales and consulting in the mid-west [of the USA]. The big wish of our customers was to get RFA content into their projects. We recommend that they still use the IFC workflow for interoperability, because translated RVT and RFA files don't carry much data. WorldCAD Access: Why are you giving it away for free?

BIM6X: It is good for our users, with whom we have been consulting on ARCHICAD sales for over 20 years. It's also good for exposure.

WorldCAD Access: What does the plug-in do so far?

BIM6X: When it brings in an RFA file, it detects automatically if it is a door, window, or other object. The Import dialog box also allows you to give curved geometry different levels of complexity, to control polygon size. The RFA is converted to a GDL object. 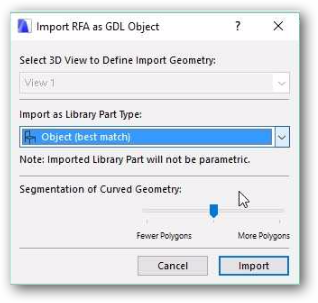 It brings in the RVT model file as a group of objects. It is hotlinked, so that when the model changes in Revit, those changes show up in ARCHICAD. A hotlink is like a 3D xref; it does not bring in all the data, like IFC would.

We can export ARCHICAD models to RVT format, as objects with limited intelligence (such as properties and classifications).

Model exported from ARCHICAD back into Revit, showing a single element (roof) selected

The RVT parameters with which it comes into ARCHICAD can be put into schedules and labels, but they cannot be edited. 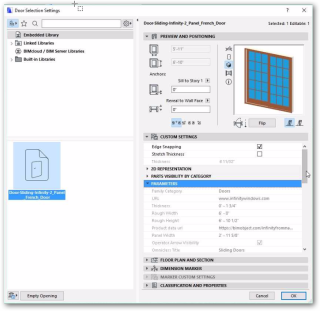 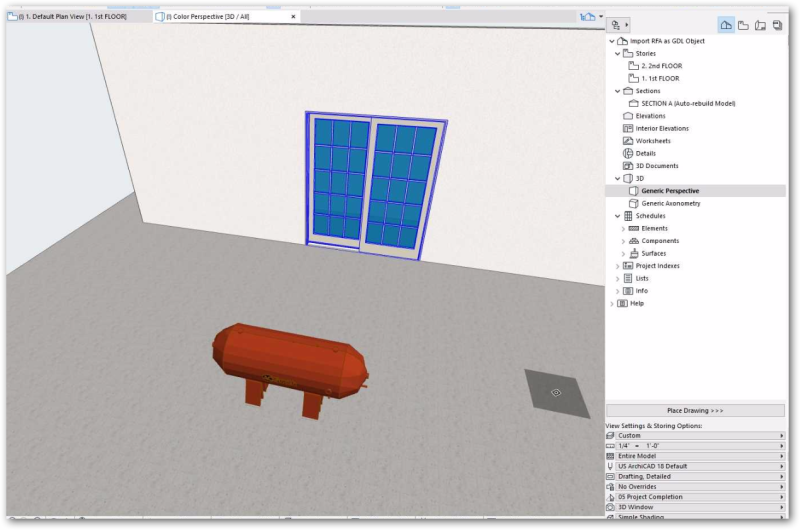 Imported RFA tank and door placed in an ARCHICAD model; the curved sides of the tank showing facets from level of accuracy

WorldCAD Access: What kind of demand have you see for this plug-in?

BIM6X: Worldwide. We have had downloads from just about every country on earth. We hadn't even officially launched it, when we noticed the first downloads starting within 90 seconds of us posting it online. We don't know how people learned of it, and now we are still just getting out the word.

WorldCAD Access: Could IFC and RVT be combined to get best of both?

BIM6X: This is not the intent as they are quite separate. It would be hard to add IFC data to an imported Revit door -- maybe it could be done with GDL [ARCHICAD's graphic description language for parametric symbols].

The workflow we recommend is

BIM6X: This is not really in our scope, as we are focused on ARCHICAD.

PDF became the de facto exchange medium for drawings and documents because it is accurate (Adobe made sure of that when they first developed Acrobat), and because it is read-only: recipients can't modify the document. Even in the CAD industry PDF has taken over from other formats meant to be lightweight (don't contain all the baggage a drawing file normally carries) and meant to be read-only (can't be edited), such as Autodesk's DWF.

But people want what they can't have, and so third-party developers figured out how to reverse engineer the contents of PDF files. There now are a number of programs on the market, usually around $100, which will do the job for us. I happened to test PDF Converter Elite, because the Vancouver-based vendor approached me to write a review. (Disclosure: PDFConverter.com provided me with a license key, effectively giving me the software free.)

My interest was in converting PDF files of drawings back to DWG format. How good a job would the software do? I received excellent tech support as I worked my way through the simple-to-use program -- although maybe tech support was excellent because PDFconverter.com knew I was writing this review. 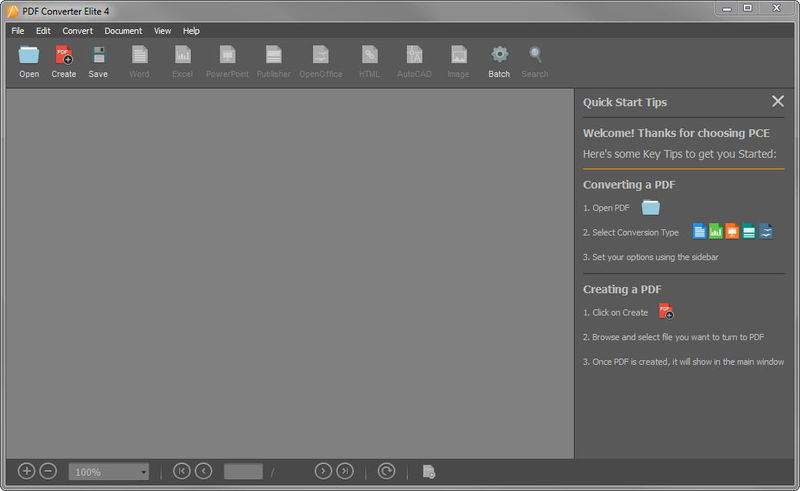 Click Open, choose a PDF file, and then choose the output format, such as Word or AutoCAD. To the right is a palette with options specific to the destination format.

My first problem occurred when I wanted to select a PDF to open. The preview screen was blank, except for an error message that referred to Windows Vista on my Windows 7 machine. Tech support quickly provided the solution to the problem, which was caused by the computer was running an older version of Acrobat Pro. I was told to hunt down the following registry key with RegEdit...

I decided to open a PDF made from one of AutoCAD's ancient sample drawings -- the complex airport.dwg floor plan. This way I would be able to compare the converted PDF with the original DWG file.

The program coverts a single page, all pages, or a selected area. It operates in manual and batch modes. In batch mode, we can select two or more PDF files to convert at a time.

Along the toolbar, I choose AutoCAD as the output option, and then reviewed the options listed on the right. See figure 3. 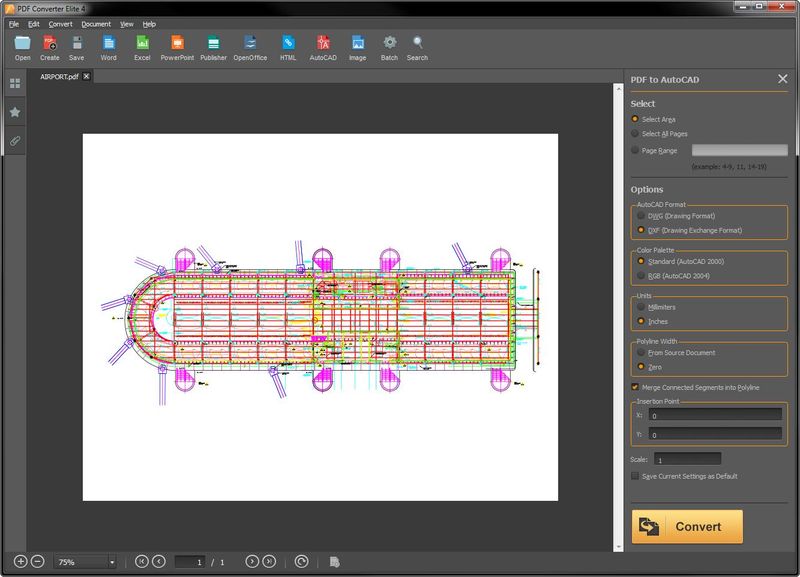 A few options puzzled me. For example, what is the difference between standard and RGB color palettes? So I clicked Help to see what it might mean. I was disappointed to see that the help for this consisted of a single sentence for all six options:

With a bit more puzzling on my own, I decided I wanted these options:

The output from PDF Converter Elite works with just about any CAD program that reads DWG files, not just AutoCAD, as well as any graphics program that reads DXF files. All entities are converted into polylines, with some exceptions. Keep the polyline width to 0, otherwise the result is sets of polylines that are too wide. Raster images in the PDF are not converted to vector lines, but retained as raster. Text is converted either to vectors or mtext; see below. OCR support is new with this release.

I clicked Convert, and conversion took about four seconds on my computer. The resulting DWG file opened in my default CAD program. I zoomed in for a closer look. See figure 4. 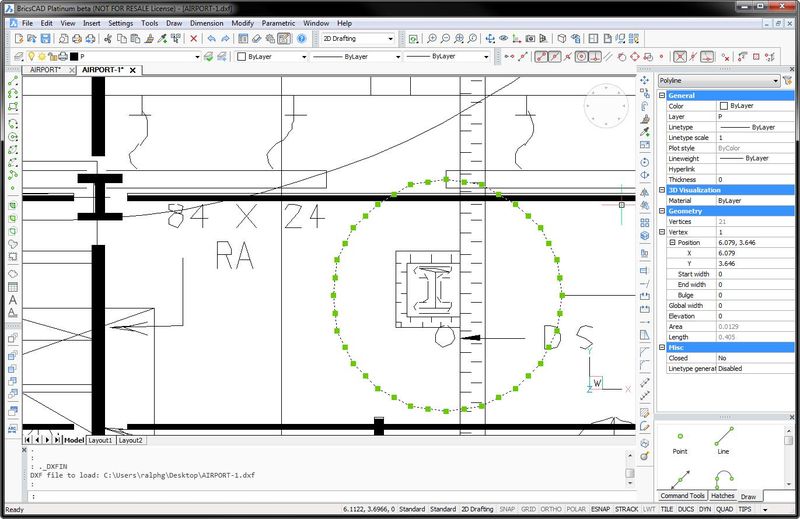 For this old PDF file, all entities are converted to connected polylines, including text, hatch patterns, and blocks -- as you can see by the one entity that I selected. The conversion was not particularly accurate looking.

I asked tech support if a OCR (optical character recognition) module is available for converting the text to CAD text. There is, but it does not work with drawings in which the CAD program output the CAD fonts into vectors in the PDF, as had occurred for airport.pdf. More recent release of CAD programs, however, give the option of exporting text as actual text. To force the OCR option on, from the Edit menu I choose OCR Options > Convert Using OCR. When I tested it again with a more recent PDF file, the text was indeed converted to strings of MText.

The other advantage of PDF files generated from more recent releases of CAD programs is that layers are optionally preserved, and hatch is exported as hatch entities. See figure 5. 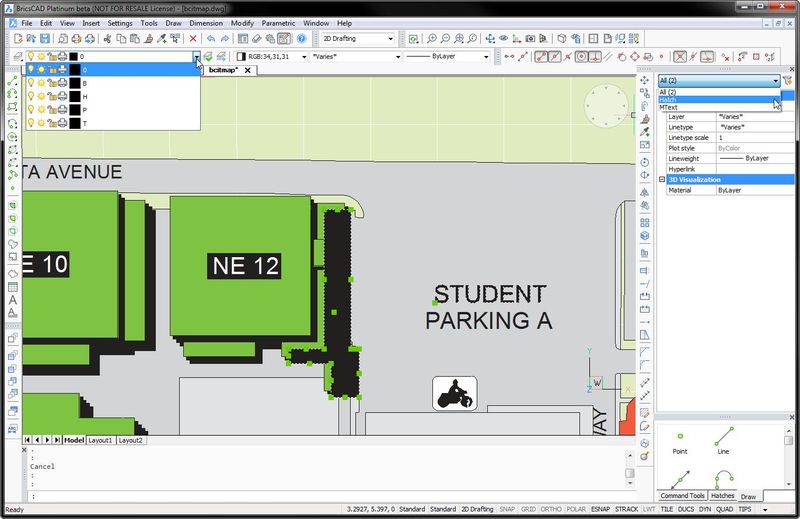 PDF Converter Elite ($100) works with what it has: PDFs based on older vector-only drawings are converted into polyline of varying quality, while more modern ones give us cleaner text, hatch, layer, and vector results. I was pleased to see that conversion occur quickly.