My new toy: the first phone built for Firefox OS 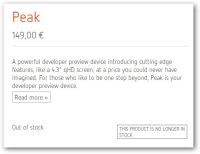 There's the Big 3 in mobile operating systems, of course, Android, iOS, and Blackberry 10. And then there are a lot of wanna-be's that you may never see -- or even hear about. I missed out on getting a WebOS phone or tablet, and so I was determined to get the latest wanna-be, one of the rare phones that run Firefox OS natively. There are only two smartphones (might be more, it's not clear to me, although Foxcon says they'll be making the first tablet) that run the beta version of Firefox OS, both from GeeksPhone of Spain. (You could... Read more →