Cambashi is a CAD market analysis firm out of England, and this week it held a Webinar intriguingly named "Assessing Investment Opportunities in the CAE market." (The company also provides consulting and training.) I listened in to hear what they had to say.

One of the first stats blew me away: There are 470 non-EDA companies providing 2D and 3D CAE and physics simulation software. The biggest names are listed below. 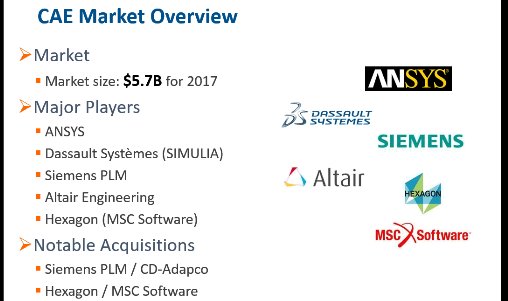 As the Cambashi Webinar was about the opportunities in acquiring a CAE firm, one obvious purchaser that jumped out at me is Bricsys, which could use analysis to compliment its advanced design capabilities.

Here is a slide on investment scenarios: 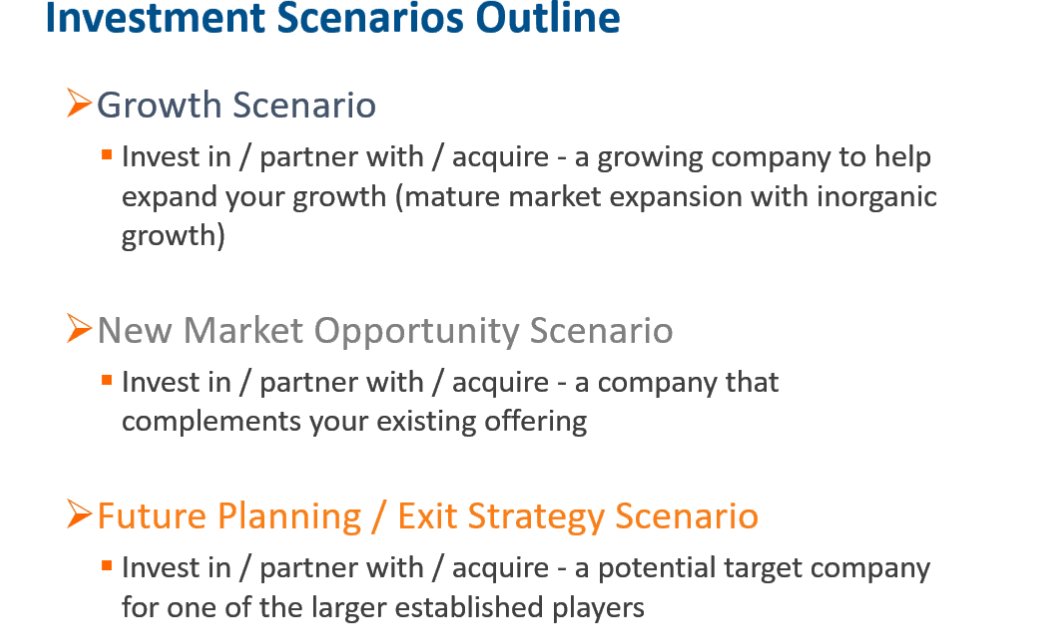 Cambashi maintains a dashboard that tracks many CAE companies, which presumably would help you decide which CAE vendor to acquire, based on criteria like these: 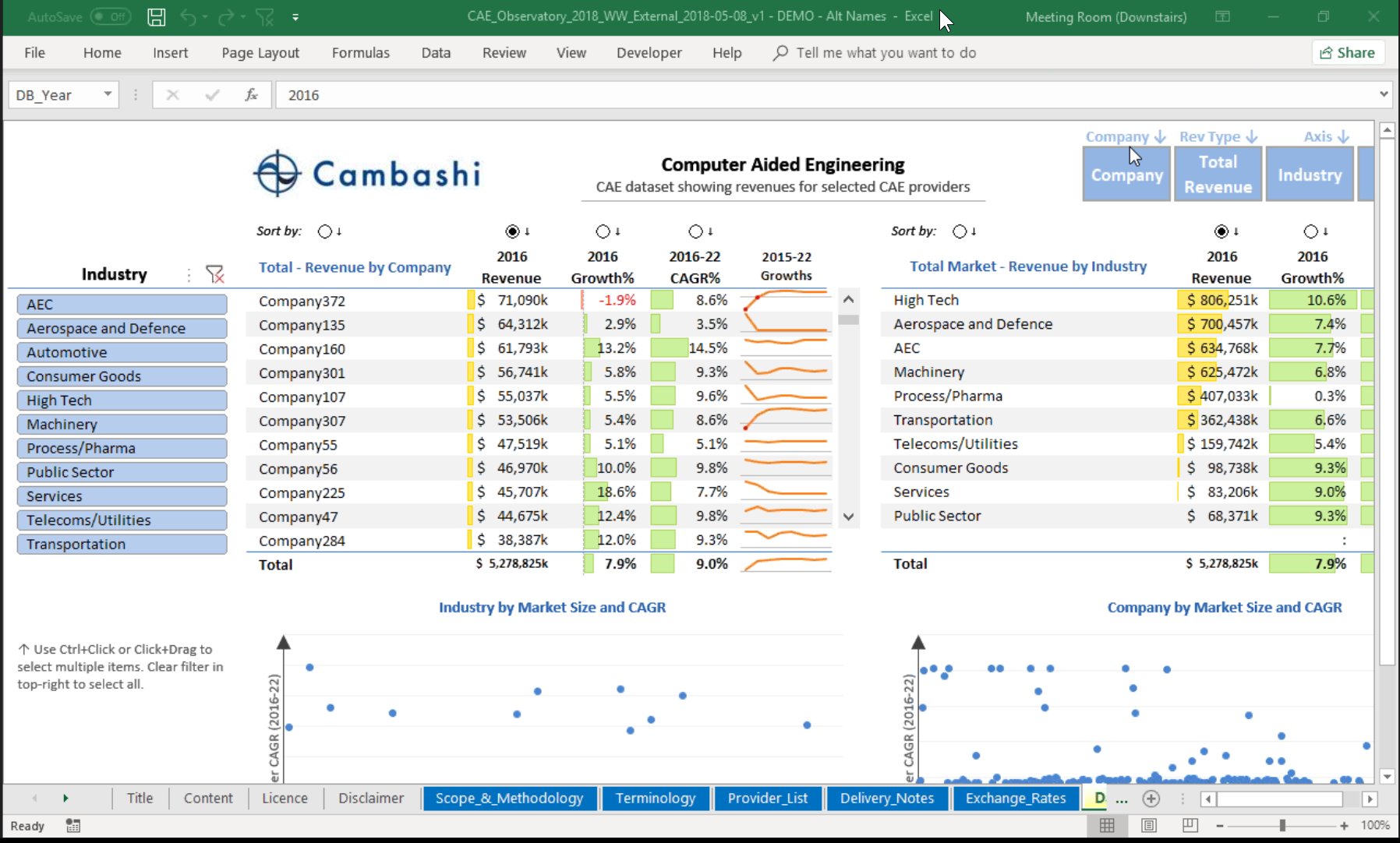 Well, that, and the cost of acquiring the software company.

MecSoft today held a Webinar to talk about the 11th release of Visual CAD/CAM, the 2016 edition that was released last week. Here is the transcript of the Q&A portion.

Q: It sounds like VisualCAD is a platform for your CAM software, kind of like third-party apps running on AutoCAD?
A: Yes that is correct. We give it away free of cost. [Visual CAD has 2D and 3D CAD tools in multiple viewports.]

Q: Is this now a stand-alone program, or is it still an add-on for the likes of Solidworks etc.?
A: What we are showing you is the standalone version of VisualCAM running inside VisualCAD our home grown CAD modeler. VisualCAM 2016 for SolidWorks will be released on Jan 25, 2016.

Q: Which VisualMill program is being shown -- std, exp, pro?
A: Uday has the Premium configuration loaded. But whatever he has shown up to now can be accomplished with the STD configuration. 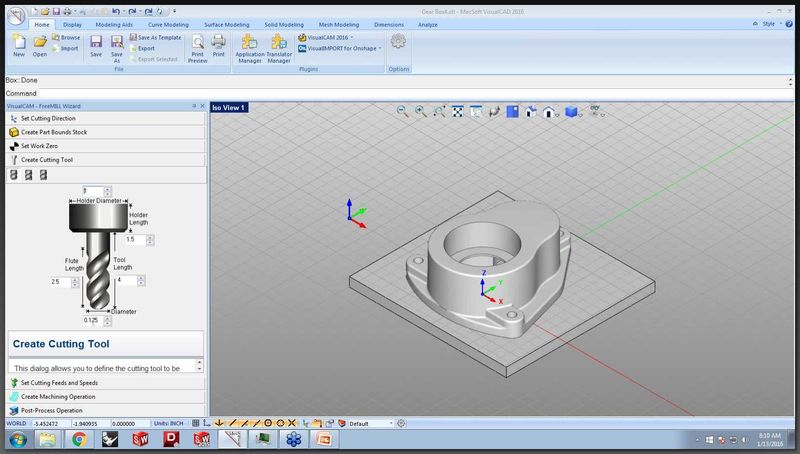 The user interface of VisualMill

Q: Have all the new advancements that have been added to VisualMill also been added to the RhinoCam version as well?
A: Yes that is correct.

Q: Is 3-axis advanced an addition to the Standard Edition of VisualCAM?
A: Yes it is. http://mecsoft.com/visualmill/ shows you the features that are available in the different configurations that we offer.

Q: Can you change the starting point [of the milling process]?
A: Yes of course. You can set the start points in the curve itself (if closed) or use the machining regions to define the start point.

Q: Is [pausing] automatic, or do you need to edit the g-code?
A: It is automatic. You will (or we can do this for you) set up the post-processor to pause and once this is done, every time you use that post processor the pause statement will be inserted into the g-code file.

Q: How come you did not use Work Zero on the 2-axis procedure?
A: Expediency! To explain further, since we have so little time to show all the features, Uday skipped this function.

Q: What is advantage to making origin at the bottom of the stock rather than the top displayed in the previous 2D example?
A: Some people like to set it to the bottom. This will allow you to make sure if any motions go below the zero quickly as a safety check.

Q: What are the main differences between VisualCAM for Solidworks 2015 and 2016?
A: We will have a separate webinar for that product end of this month.  You can learn about it in more depth.  The changes, in short, are the same changes that have gone into the standalone MILL and TURN modules in addition to other Solidworks specific changes such as Block sketch handling etc.

Q: Will nest or art be available for Solidworks version?
A: No sorry.  It is only available in VisualCAD/CAM and RhinoCAM [and so] it can be purchased separately as a standalone nesting solution. If there is sufficient demand for this we can add this to the next release of VisualCAM for SW.

Q: Is VisualCAM 2016 compatible with Solidworks 2010?
A: I believe so. We have not certified it for this version yet, however. We will do that at the time of release.

The demo jock imported a cabinet model from SketchUp, and then exploded the 3D parts into a flat layout. He used the nesting command to nest the parts onto sheets of "plywood." (Users can specify grain direction for each part.) Finally, he switched to the mill module to organize the hole drilling and cutting paths. Parts of a cabinet nested onto sheets of plywood

Q: Does it matter what product or file format the cabinet design is imported from?
A: No it does not.  Once the geometry is inside VisualCAD we can handle it.  BTW, we can handle meshes and/or NURBS based solids uniformly.

Q: Using the cabinet feature, will it handle a SolidWorks assembly saved as .igs?
A: Yes It can. We can import any solid geometry and explode it. The SketchUp file was just used as the example.

Q: Why is there so much waste with the nesting? For example, in panel number 2 [in the demo]
A: There is extra space since we picked the number of parts to be nested.

Q: Are those videos available with the purchase of the software or do you have to purchase the tutorials separately?
A: Need to be purchased separately.

Q: Do you have any pricing available for Hobbyist-only versions?
A: We offer four configurations of VisualCAD/CAM: Standard, Expert, Professional, and Premium. The Standard configuration would be the least expensive.

Q: I look forward to receiving the recorded video
A: Will get it uploaded on our website in a couple of days.

Watch the Webinar at https://www.youtube.com/watch?v=pbZjX9fir8o

PS: During the Webinar, it was revealed that MecSoft's big push this year is a cloud version of VisualCAD/CAM, starting with the plug-in version that already works with Onshape. We have schedule an interview with MecSoft on this subject, which we plan to run in a future edition of upFront.eZine.