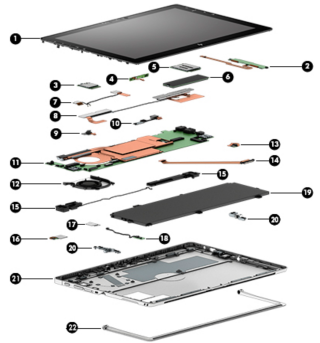 Computers come in standard form factors, such as big boxy desktops and wear-on-your wrist smart watches. One form factor that has been around since the 1990s was popularized in the late 1960s in the movie 2001: A Space Odyssey -- the tablet. In the movie, however, tablets were faked by having a film projector under the desk “react” to the astronauts’ interactions.

Tablets seemed to come of age in the 1990s with the unexpected success of the PalmPilot handheld organizer. But then the unexpected failure of Microsoft’s Windows for Pen Computing initiative, along with the failure of Apple’s Newton and wannabes like AT&T’s Eo, meant we had to wait until 2010 for Google and Apple to introduce tablets that ran on lightweight operating systems and were reasonably priced.

Today we can get a decent Android tablet for $200, Chinese manufacturers give us almost-good-enough Windows tablets for $400, and even Apple keeps normally sky-high prices low for its iPads. Amongst all this reasonableness, Microsoft decided to go upscale with its Surface line of Windows tablets (it’s possible to spend $4,000 on one), and HP followed suit price-wise with its Elite X2 line of tablets.

I once owned Sony’s version of the Surface, loved its portability, hated its disconnected keyboard, and despaired at its laggy performance. I gave it to a friend, who uses it to this day, and since then I have looked for a non-Microsoft Surface-style tablet with attached keyboard and good performance.

(Good performance = rarely having to wait on the computer.)

Last month, I found a used HP Elite X2 G2 (generation 2) tablet for US$380; a brand-new G7 model, configured the same, would cost $2,700, and would not be delivered for another 2.5 months. The only differences between the old and new models are one added USB-C port and a newer CPU.

Spec-wise, it comes with 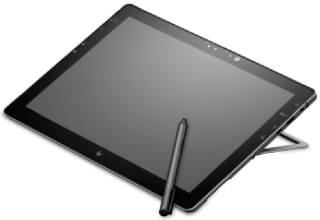 HP did a lovely job styling this tablet, with its aluminum body. It has squared-off edges, which makes it look thicker than today’s wedge-shaped laptops, but still is only 0.3” thick. The body of the tablet is 11.8”x8.4”, so an inch taller than a sheet of paper. Without the keyboard, it weight 1.7 pounds.

The hinge folds back by quite an angle, so the screen can lean back by more than 45 degrees, but it cannot lean forward, something I sometimes do to have laptop screens to avoid glare from lights. The keyboard is attached by very strong magnets and two positioning nubs; it’s actually a bit tough to take it off the body.

More Ports Than an iPad

The way HP designed the X2’s stand (extending from the sides) means there is, unfortunately, very little room left for ports:

Despite the sparseness, the X2 still has 2x as many ports as any iPad with its solitary data/charging port.

You may want to pay extra for a port extender to connect a second monitor, ethernet cable, and/or more USB devices. While some extenders can cost $400 (including the one from HP), I use a generic one that was around $50.

A proper USB-C port extender includes a PD (power delivery) port, through which you can continue charging the computer. One of the nice things about USB-C being the new standard for charging is that we can now use any charging brick; we are no longer locked to the vendor’s proprietary system. HP agrees: “Charge from a USB Power Delivery v2-compatible adapter or power source that offers 12V at 3A.”

The touchpad works well for me, but I still prefer using a mouse when I can. To connect to an external mouse, use Bluetooth -- because a receiver or cord would take over the USB-A port. The keyboard uses its own proprietary five-pin connector and not Bluetooth, unlike some other tablets. This is good, because I find that Bluetooth-connected keyboards tend to lag in typing speed.

The model shipped to me included the pen, which can cost an extra $50, depending on the source. I have found that I tend not to use a pen with computers, as touching the screen with a finger is faster and less frustrating. 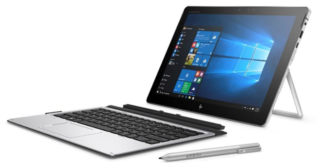 The detachable keyboard is both impressive and not. On the nice side, it is backlit, which I require of qll my computers these days, and a rarity among detachable keyboards. As well, it adds amber lights to security-related functions keys: microphone toggle and WiFi toggle, along with the usual indicator lights for other toggle functions, like caps lock.

On the bad side, while the keys themselves have sufficient travel depth, they have a wobbly feel to them that remind me of the keyboard on my older HP Spectrum laptop. I can type fast on these HP keyboards, but not as accurately as on the keyboards that come with the Asus and Dell laptops I also use. Of the three brands that I own, Dell has for me the best laptop keyboard.

Also annoying to me is that there are four extra function keys that work only with server-based Skype for Business software, so they are wasted on me and probably you. I have so far been unable redefine them for more useful functions. As these four displace keys we would normally expect to find, HP substitutes these less-than-intuitive shortcuts:

Also annoying is that HP makes keys important to writers -- Home, End, PgUp, PgDn -- accessible only by pressing the Shift key. Also annoying is that I was shipped the Canadian bilingual keyboard, which means the left Shift key is cut in half to accomodate extra French characters. I asked the seller -- Printer Ready Corporation Canada -- if they can sub me in an American keyboard; they could not source one, but they gave me a $33 credit towards buying a spare that I found on eBay for $45. In the meantime, I used Microsoft PowerTools to redefine the extraneous  key to also be a left Shift key.

Speaking of function keys, they did not work until I downloaded and installed a utility program from an HP ftp site. Odd that the utility was not already on the computer. 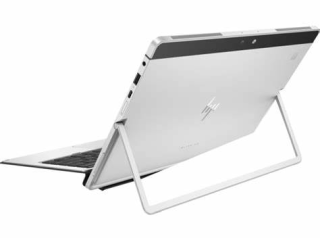 The loudspeakers are front-firing, which normally is a good thing -- normally, that means louder sound. But the ones on the X2 are so narrow, that the volume at 100% is like 60% on the other laptops I own.

In addition to two mics for Zooming, the X2 also has front (5 megapixel) and back (8 megapixel) cameras. These are of higher resolution than most tablets and laptops today. Both do video at 1920x1080. The cameras do not have security shutters.

No Windows 11 For You

The tablet came with Windows 10 Professional, which is a nice touch, as the Pro version allows things like running dodgey software in a sandbox. It cannot, however, be upgraded to Windows 11, because the CPU is one generation too old for Microsoft. I still think the only reason 11 exists is as a gift to hardware companies, because it forces corporations to upgrade perfectly good computers. 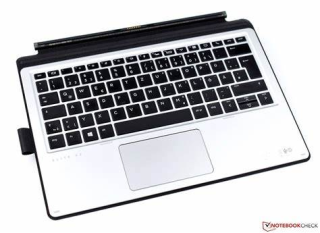 I bought this tablet because it looked so cool and it was so cheap. I do not, however, recommend it. Today’s 2-in-1 laptops, whose screens fold 360 degrees, are half the price and have half the limitations.

TIP: Instead of folding the screen down, as you would with a laptop, fold the keyboard up.

HP’s official page of specs for this tablet: https://support.hp.com/us-en/document/c05415563