Expanding inside, and outside 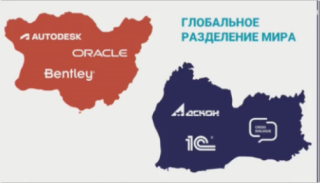 I am getting the impression that the CAD industry inside Russia is resigned to accepting the new reality: the divorce from the Western world is not going to go away anytime soon.

If we take a pariah from an earlier era as the template, after Germany imposed a six-year war on Europe, it went through a three-year de-Nazification program, followed by war crimes trials, followed by the rebuilding program funded by the USA. (In this case, rebuilding Germany was seen as the better approach than the post-WWI approach of keeping Germany financially in jail.)

So, we might assume a multi-year war against Ukraine (lasting until Russia's leader finally clues in that he is a loser), followed by additional years -- decades? -- of distancing, including the dishonor that comes from having leaders and generals arrested and tried for war crimes.

In the past, Russian CAD vendors would springboard their software from American advances in areas like kernels and APIs; now they have had to turn to relying on Russia-developed products -- to which they've had access for a decade now, but home-grown kernels and APIs were not seen as good as Western ones. Also important had been compatibility with American-developed standards, whether Siemens Parasolid or Microsoft Office.

One strand is some Western firms -- particularly in government -- over time erasing Russian code from their products; after all, Russians are some of the finest and cheapest programmers around. Much programming work has long been discretely outsourced from there -- including just about any Western CAD program you are using today. Witness the naive horror expressed earlier this month by reporters at Reuters of their recent "discovery" of this twenty-year-old practice:

As far as I know, most Western firms who use Russia-based programmers continue to do so. It is, after all, difficult to move to low-cost programmers in other countries whose trustworthiness is not yet proven. Kind of like how hard Apple is finding it extracting itself from manufacturing cheaply in communist China.

Two is that I see Russian CAD software companies working to develop new export markets to replace the West, such as China, which carries its own set of firms banished by USA, such as Huawei. Or else redeploying their offices to other countries, such as Israel.

PLM is one area in which Russian manufacturing is hyper-reliant on software from Western firms like Germany's Siemens and France's Dassault Systemes. Russian-developed PLM has not done well in the face of these and other competitors from the West.

The isolation of Russia becomes an opportunity for these home-grown PLM systems to boom, with the financial support of the Russian government -- as isicad reports:

ASCON held Mechanical Engineering Days in 21 cities, and ended this series with a convincingly illustrated call "It's time to switch to our PLM!".

Top Systems at the Constellation CAD conference presented an unprecedentedly rich package of innovations with an emphasis on PLM solutions inherent in heavy CAD.

The following article (with the incorrect title) describes some of the software substitutions available in moving design from Western CAD to Russian CAD: How three people quickly transferred unique 820 GB from BIM 360 to Pilot-BIM. (The bit about the massive data movement occurs at the very end of the article; see figure below.)

From isicad, we learn also that Russian CAD vendors are increasingly publishing materials on Telegram, with isicad's own channel up 3x, though we don't know since when.

In an earlier post, I noted how Russian contract programming firms were making use of the cloud to position their software projects outside Russia, in Western countries, to continue working with international customers. The government of Ukraine did something similar when they suspected Russia would attack them militarily.

"Three AWS Snowball devices – designed for offline migration of terabytes of data – were flown to Ukraine via Poland" after "Ukraine's parliament passed a law allowing government and private sector data to move to the cloud" in February -- to keep safe "things like the population register, land and property ownership, tax payment records, education records."

Posted at 06:52 AM in Behind the Story | Permalink