When Facebook-Meta yesterday expanded its metaverse with cartoon versions of France's Eiffel tower and Spain's Basílica de la Sagrada Família, people pounced. Here I collected some of the best tweets: 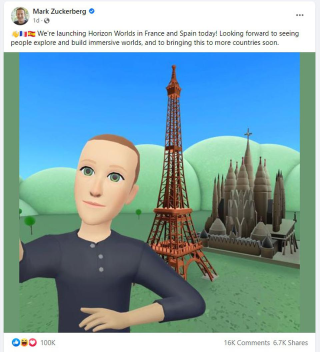 Robert Evans (@iwriteok): Tragic that every airline and tourist economy in the world is about to collapse now that Facebook has utterly eliminated the need to travel.

Cheryl Platz (@funnygodmother): I'm not going to dunk on the visuals, but the discourse raises a point I think gets missed a lot. What human need is Meta hoping their platform improves upon? It's obviously not “actual reality.” Second Life can be whimsical and lets people transcend. This isn't aspirational.

@dosmeow: Nothing will ever be the same.

Posted at 08:10 AM in Behind the Story | Permalink

Takes me back to walking the Vegas strip, outside Caesars, and an older couple in front of me pointed at the 'Eiffel Tower' and said unironically 'Everything is here, you don't need to travel'...