How my Dell Inspiron is doing, 16 months later 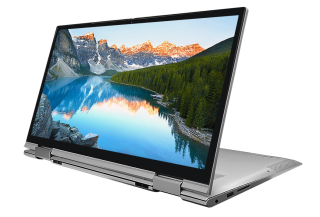 I'm pleased to report that for the most part, the Inspiron 7405 2n1 laptop I bought 16 months ago for $1,100 has been proving its worth. "Inspiron" is the third level of laptop, so not top-end. Dell's caste system is XPS at the top end, followed by Latitude, then Inspiron.

"2n1" means it has the 360-degree hinge, so it can transform into a tablet. I got mine in the dark-brown color, which looks pretty nice and is pretty different from everyone else's.

There are, however, a few quirks that I have to live with. So, here are the bad bits and the good bits.

Sometimes, when I wake up the laptop while an external monitor is plugged in, the Dell shows nothing on the laptop's built-in screen. I found a workaround: I press Windows+P to see that Project mode has been set to Second-screen Only; change it to Extend.

When I plug in headphones while music or video is playing, sound continues on the built-in speakers. I found a workaround: plug in the headphones before starting the music or movie program.

For a time, the laptop would not connect to my WiFi. I finally realized the problem was CloudFlare Warp app, which is supposed to keep DNS queries private. I still run the app (to modify the DNS lookup to 1.1.1.1), but keep Warp mode turned off.

Minor irritant: the full-size SD slot is very shallow, meaning that when I plug in an SD card, most of it sticks out, instead of being flush with the body, as with other laptops.

It seems that any laptop I buy promising a dozen hours of battery use lasts 4.5 hours. No more, no less. This one is no different, too.

I would have liked a second USB-C port, and that the laptop be powered by USB-C, the advantage being that the power could then be plugged in on either side, as with my Acer Chromebook. 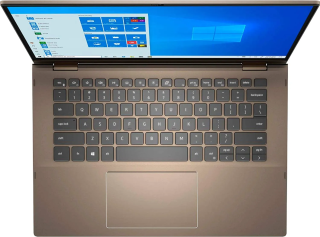 When I opened the insides of this laptop in anticipation of replacing the 512GB SSD with a 2TB one, I found to my delight that Dell gave it a second RAM slot. It is amazing in this day that there still is a thin laptop that uses slots for RAM, instead of soldering it in. This meant I could add a second stick of 16GB RAM, maxing out the computer with 32GB RAM. Frankly, I don't notice a difference with the mega-amount of memory, except that one installer program got confused and used all 32GB for itself, making the computer grind to a crawl.

The keyboard on this thin laptop is good enough for me. It has that extra bit of travel that lets me type as fast as I can, unlike some other brands of thin laptops. Also, the keys are black; crucial, as I found an earlier laptop (HP Spectre) with silver keys meant I could barely read the pale letters on the keycaps.

Having many cores in a computer is, for the most part, useless. Most software can use only 1 core, because of how software works. My laptop does come into its own when ripping DVDs, however, where all 8 cores are employed: a 2-hour movie is converted to MP4 format in 20 minutes. For CAD users, having multiple cores is useful in renderings, loading large drawings, and a very few other common tasks.

When you buy something from Dell direct, they give you a 3% credit towards another item, with which I bought their super sexy WM615 mouse (see figure at left0>

I subsequently upgraded the laptop to the Pro version of Windows 10 to get access to the Sandbox function, which lets me test dodgey software without worrying about its impact on the rest of my computer.

The 3.5mm audio port handles all kinds of input. Dell includes a utility that opens up when I plug 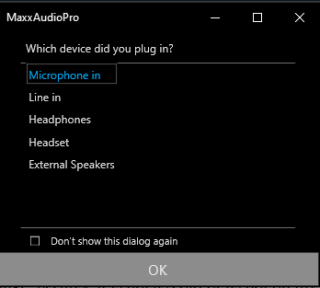 something in, asking me what it is, so that the audio is treated correctly (see figure at right). This is important for distinguishing between mic-in and line-in, which deal with different voltages and so distortion occurs or does not occur.

While Dell charges more for its "better" laptops, like XPS, I have a sneaking suspicion that there is little difference. I've reading reviews of XPS models and wonder how they are better than this lesser Inspiron. The primary difference is that the bottom of mine is plastic, instead of metal, which is an advantage, because it is not as cold or as hot on my lap.

The innards of Dell's various models are likely (I am guessing) identical to minimize the cost created by product differentiation. (I learned that with an earlier Lenovo that barely lasted a year, that the second-gen model I had bought was identical inside to the prior first-gen model; just the labeling on the outside changed.)