Even Walmart is down this quarter

@devilslayer1802: This is the first time EVER Facebook has had a quarter year-on-year revenue decline.

Anthony DeRosa / @anthony: Facebook parent Meta posted its biggest drop in daily users and its first decline in revenue as the company struggles to adjust to macroeconomic forces and growing competition from rival TikTok.

@infographx: Gen Z is literally ditching all the other social apps, except TikTok.

Chaotic Goode / @laurengoode: “Meta shares have lost about half their value since beginning of the year, underscoring investor concern about the health of the co's advertising business. That unit has been hurt by Apple's iOS privacy update, and by a weakening economy” [- CNBC]. Also, TikTok? 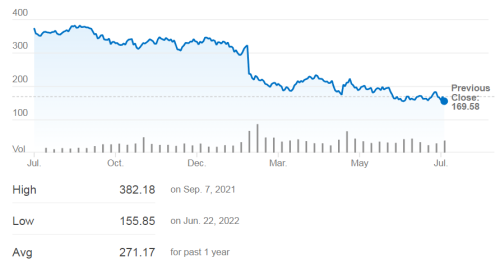 @naxuu: It's hilarious to me that a seemingly innocuous [Apple] iOS update -- allowing [iPhone] users to do a single-click opt-in or -out of data collection/tracking/analysis by apps -- single-highhandedly torpedoed $10 billion and counting in Facebook's ad revenue.

Daniel Grey / @curiousgrey8801: The company is paying the price for poor strategy & lack of consumer trust. You can change the name and all, but right now you can't change the trust. Advertisers know that.

@jgb00m: Oh hear me out, people are realizing that FB [Facebook] marketing has a relatively low return compared to other channels. And FB is a poisoned swamp.

Michael St James / @michaelstjames: Anyone who has to buy advertising on FB business (and IG [Instragram]) and has been consistently ripped off with no recourse, had pixel issues, befuddling conversion numbers in flux, knew this was coming.

Kurt Wagner / @KurtWagner8: Interesting comment from Mark Zuckerberg just now on Meta's earnings call: Roughly 15% of content in FB feed, and a little more than that in the IG feed, are from accounts that people don’t follow. He expects those numbers to double.

Philip Michaels / @philipmichaels: Bold move of a CEO to tell you that his product is about to get much worse.

It's fascinating to think about Meta focusing on getting you to watch endless videos of randos [random people you do not know] in order to fund its vision for the meta-spectacular future. A real move away from the "connect with family and friends" mantra of the past.

@jerrycap: The biggest difference is Amazon didn't change their name to Alexa

Marc Whittington / @mwhittington13: What strikes me about all of these Insta/FB quotes from Zuck/[head of Instagram Adam] Mosseri is that they seem to attribute the growth in video to user desire or some phantom phenomenon when, in fact, *their [Insta/FB's] choices* and algorithms are the sole things driving those numbers higher. 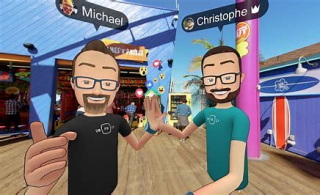 @saranormous: $2.8 billion of loss (spend) for Meta's Reality Labs in Q2 [second financial quarter]. That's an entire AR/VR [augmented reality/virtual reality] ecosystem's worth of startup funding. I think of that as 300x Series A financings [initial funding for a new company], or more than 3 per day for every day in the quarter!

Dave Lee / @daveleeft: It wasn't long ago that Groups was Facebook's focus. Not a single mention today. Remember when you used to upload photos? Leave messages on walls? Play games with people? It's almost all gone. This isn't nostalgia -- it's Facebook fundamentally changing what it is.

Dave Lee / @daveleeft: My main thought on Meta/Facebook today with the push to Reels. What motivation is there for the *regular* user to *post* anything today? Not performers, or influencers, just a regular user. What utility does Facebook have?

Eric Boehm / @ericboehm87: By the time Congress gets around to breaking up Facebook, the market will have already killed it and rifled through its pockets for loose change.

Posted at 07:38 AM in Impractical, Internet | Permalink