In July, the entire Rogers system collapsed for a day. Rogers in Canada forms an oligopoly in communications services, along with Telus and Bell -- landline telephone, cell phone, cable tv, Internet access, and commercial data flows. People who were signed up with Rogers could not phone 911 to access emergency services or get work done remotely or text their friends. The outage impacted the economy, as stores could process no debit card transactions and in some cases not process credit cards either. Some hospitals were reduced to contacting staff by announcements made through local AM radio stations, hoping people were listening.

The problem was caused -- as is not uncommon these days -- by a faulty software update. Landlines were affected, because Rogers runs all communications over IP (Internet protocol) networks; it's cheaper that way. As a result of the debacle, the company promised to split cell/Internet traffic from landline traffic, and government has told debit/credit card services to run on two providers.

Tracking service status shows the other big causes for disconnects include wires cut by digging equipment and hardware upgrades. Here is the map of Telus outages as I write this blog: 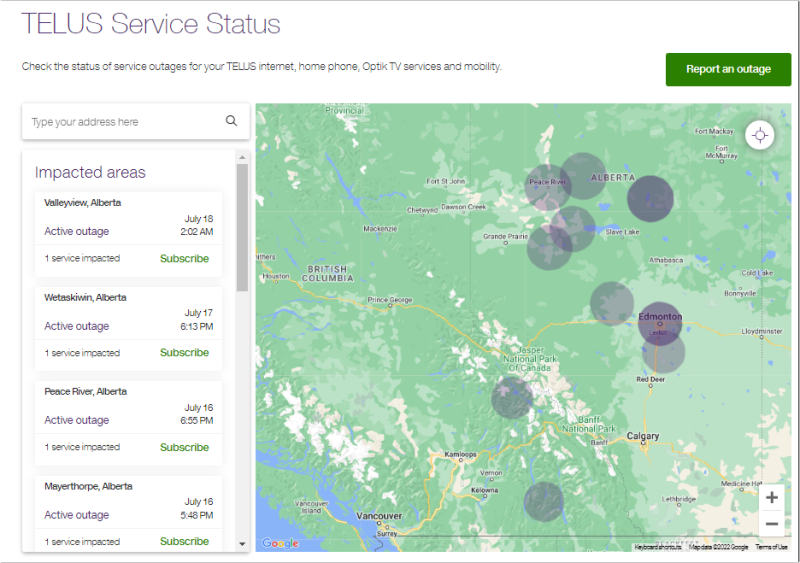 It is not uncommon for people to have all their communications handled by one supplier. My dad, for instance, has his telephone, Internet, and cable tv bundled through Telus (he does not have a cell phone) provided through the old folks home in which he lives. People are told bundling makes makes the overall cost cheaper. I get regularly harassed by my Internet provider, Telus, to also take on their home security and medical monitoring services.

We fared better than many, because we split services between providers:

To rely on a single provider for all of your tech
is as foolish as relying on a single grocery store.

As for the cheaper price from bundling, that is a myth. I negotiated a lifelong discount with Telus when they forced me from copper to fibre. I was an early adopter of Internet-based home phones, and so I pay about 4x less than I would with the default home phone provider (Telus) for our area. I got my wife and I on a dirt cheap cell phone plans from Freedom Mobility -- unlimited phone calls throughout Canada, unlimited texting internationally, and unlimited data for about $17/month. And we have never had cable tv.

PS: Keep a hoard of cash at home for days when systems fail.

Posted at 12:33 PM in Impractical | Permalink

I also have Internet/ph and mobile split between two different networks and deal with two banks. I travel with at least two credit cards from different banks and providers after seeing someone in Korea stranded by a cancelled card due to 'suspicious transaction behaviour'. They were on a rapid international trip and the bank interpreted the transaction geolocation spread as fraud even though it wasn't.
The only remedy their bank could offer was to post a new card, to their home in the US...