Benchmarking the M1 vs Pentium

There was a lot of hype generated by Apple's marketing department and echo'ed by the in-love-with-Apple tech media over its  new in-house CPU, the M1. The specs were so amazing that excitement ran high over what subsequent CPUs would be able to do, M2, et al. To infinity and beyond, to quote a cartoon character.

I was relieved to hear it would be amazing. The first Mac mini I bought was pretty good. (See figure at left.) It still had all the accouterments that Apple, in its need for every higher profits, stripped out of subsequent models: DVD drive, remote control, SD card slot, upgradeable RAM, separate headphone and mic jacks, and so on. Sadly, I ruined it trying to replace its hard disk drive with a solid state drive.  No prob, I can just buy a newer one. What a disaster. I spent too much time trying to figure out why it was so dog slow. Launching a program typically takes minutes. I came to hate that spinning rainbow disc. No prob, I can just buy a newer one.

The newer one was a brand-new M1-powered Mac mini. Well, not brand-new. I saved $200 by buying a returned one, and I think I know why the unhappy original owner returned it. In another blog entry (Updated: Solved: Why the new Mac Mini Won't Work With an Ultrawide Monitor) I write about how it took me two days to get it connected to a monitor, any monitor. First, a regular 1080 HD one (the M1 Mac mini overscanned, making access to the GUI elements that surround the MacOS desktop inaccessible), then with my then-new Dell 3440x1440 widescreen monitor (the correct resolution was hidden in MacOS's Display dialog box). As Management Speak (@managerspeak) so eloquently put it, "The problem is that you are running the latest technology."

While I appreciated the M1 running at what was now a normal speed, as compared to the dog-slow earlier model, I was puzzled that it ran at a normal speed -- not blindingly fast, as the over-enthusiastic tech media had promised me. Indeed, I got into an email discussion with one Mac enthusiast who said, "But look at the amazing specs! And think about the future!" Ya, that is a problem: never rely on the future, especially when it comes to Apple. 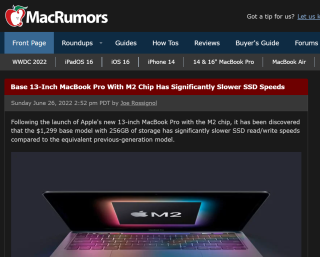 Which is why it may have come as a bit of shocker to MacAddicts to learn of the result of an independent benchmark showing a brand-new M2-equipped Mac slower than its M1 predecessor:

Note that the problem is specific to the 256GB model. Vadim Yuryev figured out why: that particular SSD has but a single controller chip. This means it reads data half as fast as it ought to.

There is a standard among SSD drives that is easy enough to memorize:

So, you never want to get a 128GB SSD, and in the case of Apple, a 256GB one. The reason for SSD is speed, and so there is no point spending $$$ on a hobbled product. Why would Apple hobble a MacBook Pro, whose very name implies speed? Two possible reasons:

Cheapness. Apple went cheap to fill its McScrooge-like coffers to even more overflowing. We saw that with the gradual removal of features from Mac minis.

So this brings us to the M1. Is it really blindingly fast, or is it just Apple marketing that is blinding us? I noticed that it didn't feel particularly fast, and so decided to run a benchmark that would work similarly on a Windows and MacOS computer: launching Graebert's Ares 2020 desktop CAD software (see figure at left), which on both operating systems is essentially the identical program. 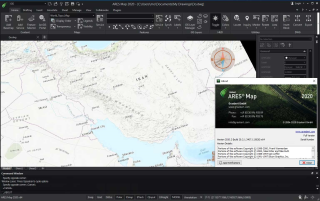 (Normally, I do not care about formal benchmarks. My benchmark is entirely subjective: I should not have to wait for my computer. Anything slower is unwanted, anything faster is unnecessary. Which is why I continue to use a desktop computer that I bought in 2010, and over the years upgraded it, such as maxing out the RAM and replacing the main hard drive with a 1TB SSD.)

So, the M1 is no speed demon: its 11-year newer technology is only 16% faster, which in my book is nearly imperceptible.

Posted at 09:19 AM in Hardware, Impractical | Permalink

Do you know that M1 is a new CPU which needs a new compilation for apps to use all its power?
But it allows running apps compiled for Macs Intel via Rosetta 2 emulation.
And ARES Commander (2020 or 2023) are only compiled for Mac Intel and so are not native on Mac M1.
With this kind of apps, you don't see all the power of this CPU.
Try to run Ares Commander 2020 for Windows on an ARM PC with Windows 11?