Alright, here we are in Munich, my first trip overseas in 2.5 years. For a decade or two, it was normal for me to commute to Europe and other fascinating places in the world several times a year. Heck, I timed my shopping trips in Europe to replenish those things that aren't available or are more expensive in North America.

So, I am in Munich for the Dassault Systems Spatial conference, while most of the rest of the CAD media is in Detroit. Dassault Systemes (Spatial) and arch-rival Siemens planned conferences for the same day, coincidence, I am sure. Both CAD vendors announced a date, but not the location, with things being up in the air so much. In-person Solidworks World (er, 3Dexperience World) was, after all, cancelled with just a few weeks to go.

As it was,  Spatial announced Munich first, and so I booked the trip; Siemens announced Detroit with just four weeks notice, and so this morning I am not in Michigan. Roopinder Tara reports from Detroit on his CAD Insider blog: thecadinsider.com/2022/04/back-in-the-circuit.html.

The two conferences are very different. The Siemens one is specifically directed at the CAD media and analysts, and so those guys and gals have their airfare and hotel paid for by Siemens. The Spatial one is directed at programmers and customers; I may be the only media person here. Disclosure: Spatial paid my hotel and provided all participants some corporate gifts (like a blank book and pen), one of which I am still trying to figure out. (It's round and white and plastic.)

This Spatial event is broadcast live online at info.spatial.com/2022-insiders-summit-broadcast-registration. The sessions are being recorded for later viewing.

I consider the conferences put on by Spatial, Open Design Alliance, and similar firms to be the most important in the industry. These are the companies that determine the future of the CAD software we all use. They write the code that undergirds functions like data translation, solids and surface modeling, constraints, rendering, and even some aspects of the user interface.

By attending this conference, I learn what is in the pipeline for you. 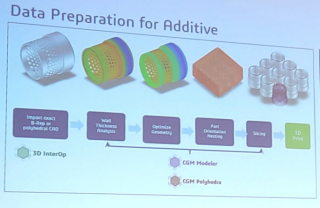 Spatial makes two lines of products based on two kernels, ACIS and CGM. ACIS was the first solid modeler licensed on the market, going back to the 1980s, and it continues to be the basis of CAD programs like BricsCAD and IronCAD. CGM is the kernel used by CAD software from Dassault Systemes, and Spatial has the job of licensing it to other CAD vendors. From what I know, CGM is not [updated] as popular as ACIS outside of Dassault, but [updated] is much more powerful than ACIS, and so some features of CGM, like polyhedral modeling, are being ported to ACIS.

The primary competitor to ACIS is Siemens with its Parasolid kernel. It is my understanding that Parasolid is more commonly used than ACIS. There are some oddities in the industry. IronCAD uses both ACIS and Parasolid. Solidworks, a Dassault program, uses Parasolid. Autodesk uses ShapeManager, which is based on ACIS but developed independently.

The theme for this 2022 Spatial conference is "being a trusted partner." Spatial plans to do that thru three phases:

"We are expert in geometry; it's what we do. But we have to make sure we match your workflows." To so this, Spatial relooked at what it means to provide expertise. For instance, it improved its definition of "done" to mean the product is ready to use by customers. Spatial now provides dedicated people in a variety of locations in the world to support customers. Finally, Spatial tries to make sure that updates are meaningful across all APIs (application programming interfaces).

"We are very excited about the future, about all the problems to solve."

Despite what this photo seems to show, the room is in fact mostly full.

In addition to porting polyhedral modeling from CGM to ACIS, Spatial is considering move feature recognition to ACIS, as well. This came about because ACIS customers did not want to have to also implement CGM just to access those functions.

Geometric translation is important as designers want to access the data and meta data in drawings from other CAD systems.

Spatial continues to improve simulation, which involves model preparation (remove unnecessary details to speed up the simulation computation time), Boolean-ing parts together (to turn multiple parts into one to simplify the simulation process), and mesh generation (because simulation works on individual cubes of the model).

In subtractive manufacturing (machining), customers are interested in determining ahead of time how much each operation will cost -- grinding or drilling or turning. PMI helps make these cost estimates. Also, customers want less human interaction -- maybe even getting rid of expert machinists entirely [booo!] -- so, determining automating drill sequences of holes, workpiece orientation, and bounding fences of rough cuts.

In additive manufacturing (3D printing), Spatial  is improving slicing performance; the next release will expose 3D nesting, borrowed from Delmia. Spatial is working on adding more supports and different kinds of support shapes, like cones.

Polyhedral modeling is modeling with "natural shapes," like teeth in gums or tunnels through mountains. A new feature is mesh deformation, so that there is space between teeth for flossing. Still working on more tools for healing meshes. Reverse engineering of scanned data to produce a b-rep model "is still a ways off," but they do have edge detection.

Spatial is working on supporting non-CAD graphical data, such as from Viz, and converting portions to b-rep (CAD models). There is work being done by Spatial on AR/VR and BIM/IFCs, which involve huge models. InterOp reads IFC and Revit, and will soon write IFCs.

To improve QA (quality assurance), Spatial now offers alpha and beta versions to test that things work when the release is finalized. Working to improve performance in large models with Booleans and clash detection, along with faster releases.

Spatial sees a move from C++ to C# for programming; Linux support is finally available. A Mac version for the new ARM-based M1 CPU will be available in the fall. Spatial is still working on learning what customers want to do with the cloud; Spatial has cloud APIs available. Finally, Spatial is making sure their code has no cyber vulnerabilities.