Facebook was this week kneecapped for being a one-trick revenue pony in pretty much only selling ads based on skifing (local slang for taking things without permission) our personal details. Facebook's underwhelming financial report was due to Apple increasing privacy in its products, making Facebook less attractive to ad agencies. One estimate* is that 70% of the loss of ad revenue was due to Apple's hardening of privacy, which, over time, Apple will make more stringent.

And so for Facebook, this will not be a one-time drop, which the stock market noted by lowering the boom on the share price (which represents a corporation's future value) by 28% -- the $92-billion fall being largest dollar-drop in the history of stock markets. 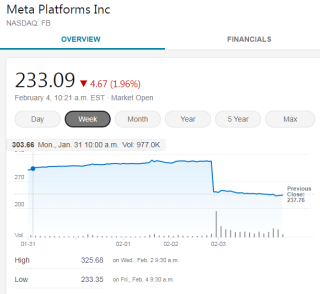 But it's not just loss of future ad revenues. The pivot to a future VR/AR-based metaverse, which included a change of the corproate name to 'meta', kneecaps Facebook's other leg, representing a loss of $10 billion on its own. This, too, will get worse, because the future for metaverses is as bright as for 3D TVs, something I have been saying for years now.

Google doesn't suffer from the same problem, because Apple picked Google over Facebook, and Google benefits from being somewhat more diversified. Of the monster tech firms, Amazon is the most diversified.

Not that Apple is the golden boy here. The public reason that it increased privacy in its products is to protect us from outside firms skifing our personal details. The inside reason is that it wants exclusive access to our data, which it sells to advertisers via Google to pump ad revenues. Google scratches Apple's back by returning $15 billion yearly to keep Google the default search engine in Apple's Safari Web browser.

With Apple being a $365.82 billion/year company, the need to grow revenues ever higher will lead it to ever more desperate measures at revenue-grabbing. We see desperation in moves like attempting to prevent the US government from blocking American firms doing business with the nasty areas of China and eliminating the Apple Store monopoly on apps.

As well, we see

The drawback to siloing (locking in users) is that it blocks Apple's access to the 85% of technology users who aren't inside the Apple camp. Recall that iPods and iTunes were damp squids until Apple allowed Windows users to access them -- an instant six-fold increase in the potential user base.

So I find it fascinating that Apple has reverted to ignoring the rest of the addressable market; perhaps, from inside the Apple Park bubble, siloing makes exquisite sense. Just as it makes perfect sense to Facebook to hold an a priori assumption that all our personal details belong to it.

As Andy Grove wrote, "Only the paranoid survive." Translated, this means that we must run our companies on the assumption that our a priori assumptions are expendable: what we do today won't be what we'll be doing tomorrow. Plan on it; I did. It's how I ran upFront.eZine Publishing for the last 30 years. (For 25 years Intel didn't follow their former CEO's advice.)

Posted at 03:46 PM in Behind the Story, Impractical, Internet | Permalink