Why people left the workforce

One of the puzzles of our era is over the large numbers of people who didn't go back to work. As someone who was laid off (during a recession in 1984) and quit a regular job (to become self-employed in 1991), I find the puzzle fascinating. Of those not returning to the workforce following the Great Coronavirus Lockdown of 2020

GCL'20 was a disrupter, an event in history so significant that it dramatically changed human behavior for good: what once was normal no longer is.

The first time I experienced this was following 9/11. Until then, trips by Canadians across the US border to communities like Sumas and Blaine were casual, normal. The village of Sumas WA had the largest number of gasoline pumps per capita in the entire USA, because we Canadians would troop down there for cheap gas, cheaper milk, and lower postage costs. Often, US and Canada border guards asked us only about the purpose of the trip.

Following 9/11, the US clamped down on border security, and trips were casual no longer. A decade later, the Canadian dollar sky-rocketed, making US products expensive. The weekly habit of "goin' down to Sumas" ground to a halt, and the village now features vast ghost plazas of dismantled gas pumps. What was normal no longer is. 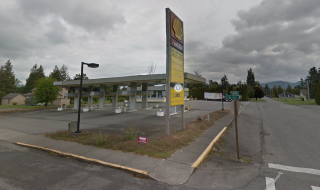 One of the closed gas stations in this town of 1,500

The Great Coronavirus Lockdown of 2020 did the same. People found that what once was normal (you're 18, now get a job!) no longer was. Commuting each day to work at deadend jobs like retail sales clerk or office paper pusher wasn't the way life was meant to be. People realized life could instead be pleasant.

Still, in this society we need money to live on, so this is what people are doing instead:

These changes to employment result in lower income, but it turns out that the same disruption is also allowing people to afford to live on less. By categorizing the less-working population into two groups, let's see how.

Group A. Being paid to not work

Group B. Reduced cost of living

The lockdowns caused people to realize that they could live better by earning less combined with having less to spend on.

The Great Disrupter wasn't so much due to coronavirus as governments' reaction to it; we can credit government for creating the conditions under which large chucks of people chucked it.

Being self-employed, the Great Coronavirus Lockdown of 2020 had no effect on me workwise, except in one area: travel. Since my childhood, it was normal for our family to fly across the Arctic and Atlantic Oceans to visit Europe every couple of years. (All our relatives live there.) This normal way of living carried on with my work, where my wife and I (and sometimes my children) traveled to Europe two to five times a year.

With GCL'20, travel abruptly ended. We found it was nice to no longer endure airport security and immigration lineups, sitting ten hours on aircraft, suffering from jet lag (both ways), missing train connections, and being bitten by bedbugs in hotels (just one time). We have stopped thinking about our next trip; and by no longer travelling we've saved a tonne of money. The new normal is that I can earn less because I spend less.

For people whose worklife routine was disrupted in 2020, the new normal has become very pleasant in 2022. As the lonely gas islands in Sumas attest, sometimes there is no going back.

Posted at 07:05 AM in Impractical, Travelogues | Permalink