When the replacement SSD won't boot 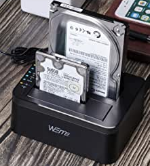 Over the years, I've switched all our computers and laptops to solid state drives (SSD), after discovering just how fast they are compared to regular hard disk drives (HDD). The process is simple, usually:

1. Use software or hardware to clone the content of the old drive to the new one. The cloning process makes an exact copy of everything, including the operating system. You pay for cloning software or get it free, such as Macrium Reflect Free. Cloning hardware is a device that holds two drives, and clones the content from one to the other; see figure at left.

3. Start up the computer with the new SSD.

But when I followed this tried and true procedure on my newish Dell laptop, the result was two days of trying to figure out why the new SSD wouldn't boot. The Dell repeatedly complained "no boot drive installed." So I put in the old drive, and to my amazement (or horror, take your pick), it made the same complaint. Now I was really worried; after all, the worst case scenario was buying a new laptop.

I won't go through all the things I tried during those tense 48 hours. In the end, what worked was burning a recovery version of Macrium Reflect to a DVD (found in the menu under Other Tasks), booting the Dell off that, and then running Reflect's option to repair the boot sector. First time, it made no difference, oddly enough; later, I tried it again, and this time it worked. 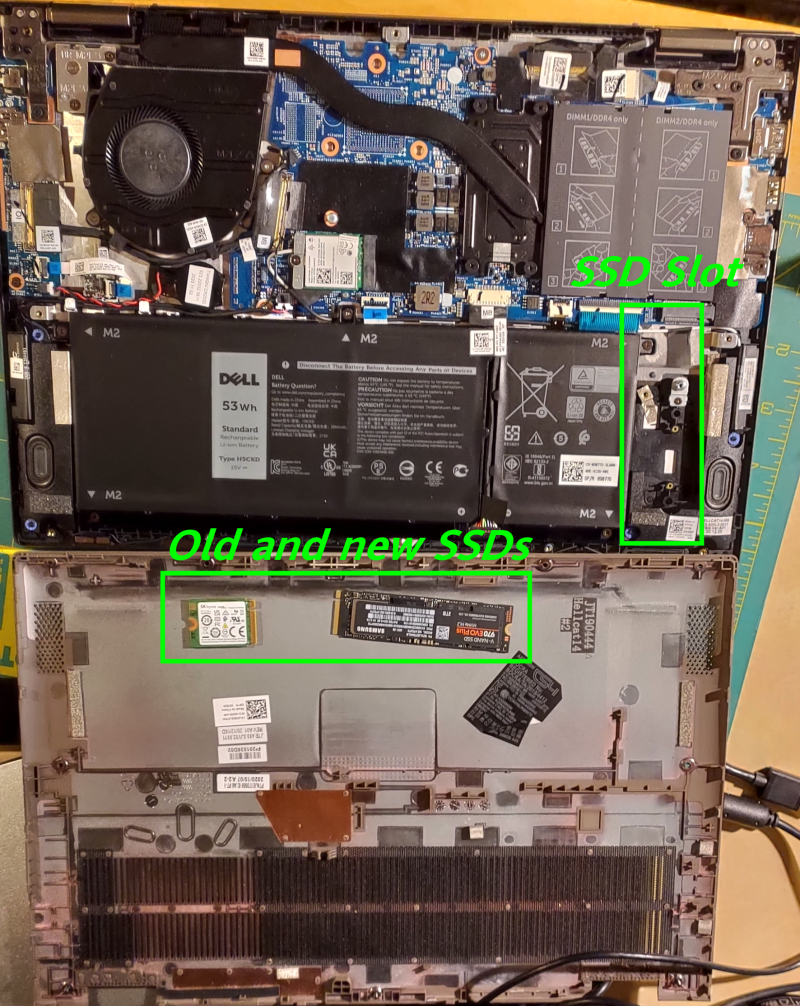 Inside the Dell laptop

Here are some of the other problems I had during those two nail-biting days.

Samsung. I purchase Samsung SSDs, because they come with cloning software; the memory chips are made by Samsung, so no dodgy ones; and the Magician utility software lets me easily add a trim section and setup a cache to make the drive every faster. I bought the 2TB 970 EVO Plus Series M.2 NVMe SSD at a Black Friday sale for nearly half-price.

The very first headache of the two-day endurance race was that Samsung's cloning software wouldn't work, which is why I eventually got Macrium Reflect Free.

After I got the new SSD working in the Dell, I was so disappointed to find that the Magician utility software doesn't do much with the 970 EVO Plus SSD. The software won't perform benchmarks on it, won't set up a cache in RAM -- the Dell has, after all, 32GB RAM. Maybe an update might add these functions later. 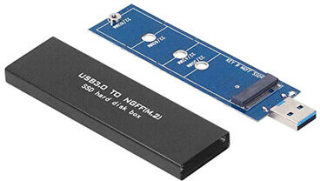 NVMe. All of the SSDs I've installed either are 2.5" SATA versions that fit in desktop computers, or M.2 SATA versions that fit inside today's laptops. This means I have both kinds of adapters for cloning drives in external drive enclosures. My newish Dell laptop, however, uses the latest NVMe drives, which are much, much faster than the older SATA-interface drives.

Also, the new ones use a different physical connection. Which mean I had to buy an M.2 NVMe external drive enclosure, about $40. This was not a wasted purchase, as I later plugged the old SSD from the Dell into it, to create a portable 512GB drive for "free."

Macrium Reflect. When I finally found that I could use Macrium Reflect to repair the boot sector of the drive, this process was not straight-forward either. Initially, I used a USB thumbdrive onto which to put the recovery files. Macrium Reflect complained it could not write to track 0. So I tried another USB drive, and another. Always the same complaint. (I couldn't get the Dell to create a Windows-based recovery disk.)

Finally, I gave in and created a recovery DVD, which is mildly annoying as booting off a DVD is so much slower than from a USB drive. But at least it worked.

Dell. I worked through all kinds of workarounds suggested by Dell forums, which included things like holding down the power key for ten seconds while unplugging the power supply, then doing this and that and the other. None of it worked.