Working with a multi-computer mouse

One, two, and three

Logitech has several mice that work with more than one computer. To use the two-computer mouse, you plug the transmitter dongle into one computer, and set up the second computer with Bluetooth. Then, you press the 1-2 button on the mouse to switch between them. Button 1 relates to the dongle, button 2 to the computer with the Bluetooth connection. The Logitech M585 is a mouse like that. I was able to set it up for a Windows laptop and an M1 Mac Mini. 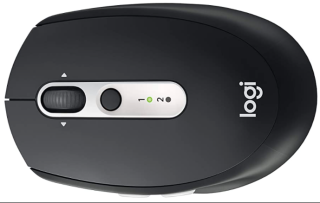 Logitech M585 mouse for use with two computers

Another mouse handles three computers, the Logitech M720: attach the receiver to one computer, and connect the mouse with Bluetooth to two other computers. Press a button on the side of the mouse to switch between computers 1, 2 and 3. Computer 1 is the one with the dongle, computers 2 and 3 connect through Bluetooth. 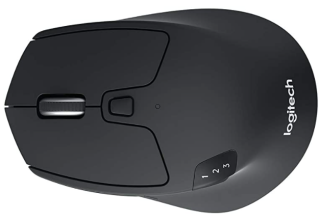 Logitech M720 mouse for use with three computers

I recommend using the two-computer mouse if you are working with two computers, because pressing the button an extra time to skip past the unused connection gets annoying.

TIP   Here's another reason to use a two-computer mouse: when I need all of the USB ports (both of them) on my laptop for other things, then I can connect the mouse through Bluetooth.

But Bluetooth connections are inherently slow, so when I want speedy response from the mouse, I use the dongle. Just remember to press the 1-2 button after you switch from Bluetooth to dongle mode!

You should download the Logitech Options software, which replaces the old Setpoint software. It lets you assign different functions to the buttons and set the cursor speed. Curiously, the MacOS version does not allow you to assign double-click to any mouse button through Options. There is no version of Options for Chromebook or Linux. 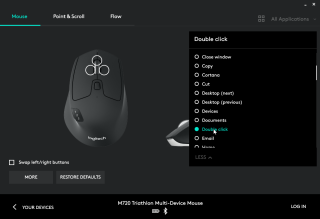 Logitech's Options software for customizing the buttons of their mice

Both of these mice offer Flow, which lets you copy and paste between two computers. Both must be on the same WiFi network. Make the connection with the Flow tab in the Options software. I tried several combinations of computers, but could not get it to work:

That Flow did not work was disappointing , as I would have interested in testing it out. One solution suggested by Logitech tech support is to disable the Hyper-X Virtual Adapter from networking in Control Panel's Device Manager. I did that but it did not cause Flow to work.

If you really need the functionality of flow, take a look at barrier: https://github.com/debauchee/barrier

no chromeos support as well, but at least it's working usually.

Why on earth? It's easy to network any number of computers together, then the whole file structure of all of them can be acessed in Explorer, provided they (or the ones you currently need ) are interconnected by ethernet and/or wifi via a router e.g. the same router as your broadband comes through.

I use workarounds like multi-computer mice and pCloud (a kind of Dropbox) to get around the problem that I have never been able to access our office computers through the network. Here, Windows fails me.