When your Logitech mouse won't connect

So in an earlier post I waxed eloquent about mice from Logitech that handle two (such as the M585) or three computers (the M720). In  my case, these mice are ideal as I have a Mac Mini that shares an ultrawide monitor with my Dell laptop. One mouse for two computers.

However, in the last week, I've not been able to get the mice to work with either computer -- neither with the transmitter or by Bluetooth. Lots of generic advice out there that is really unhelpful ("Try turning on Bluetooth") or downright dangerous ("Erase this file...").

TIP  You can have more than one mouse connected to your computer at a time. This is useful when debugging wireless mouse problems. Plug a wired mouse into a USB port to help you manipulate the user interface of Windows or MacOS.

Logitech's Unifying Receiver is supposed to handle up to six devices -- mice and keyboards. But they aren't just plug'n-play nilly-willey. I have several laying around, and found that when I plugged in one, it might not be the right one.

So if your computer can't connect to your Logitech mouse through the Unifying receiver, try this steps:

I spent two days trying to figure out why the two mice would not connect to my computers through Bluetooth. MacOS saw the mice in the Bluetooth connection panel, but would not connect. Windows just plain called them "Unknown devices." I tried a lot of things suggested by others on the great intertubes, but finally found this one cool trick that makes them work -- one that Logitech does not tell you about. 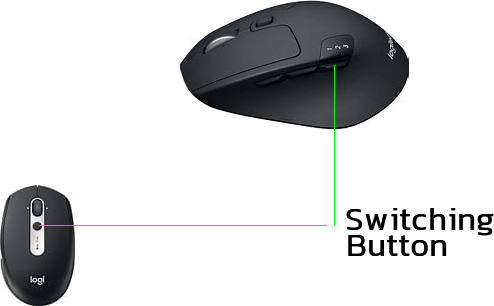 Super helpful. I was tearing my hair out after my Logitech bluetooth mouse disconnected and wouldn't reconnect.

very helpfull sugestion. Many thanks. I almost parted with my newly purchase logi mouse, until i read your message. Many thanks