How much does a mouse cost?

Of all the hardware I use in my job as a freelance writer, it's the mouse that gets worn out the most often. I thought I'd stock up on some spare ones, and came across an intriguing model from Logitech on the Best Buy Canada Web site.

The M720 is both wireless (using the Logitech dongle) and Bluetooth. I liked that, because I prefer using the dongle for speed, and Bluetooth is there for when the laptop runs out of available USB ports (happens to me sometimes).

In addition, it works with up to three computers in turn, handy for one of my workstations where I have the Windows laptop and the Mac Mini that share a large monitor.

As a triple bonus, the mouse was on sale for $90 (all prices in Canadian dollars, rounded to the nearest dollar), instead of $130. Cool! I was saving $40! Here I want to note that it was not sold by Best Buy Canada, but listed by a third-party vendor.

Before clicking Add to Cart, I wanted to know the purpose of that button below the roller wheel. I checked out the Logitech Canada site, and -- to my chagrin -- learned that the suggested retail price of this mouse is $70. Quelle supris. Saved another $10.

Curiously, Logitech's official documentation does not explain the purpose of the mystery button, located between 5 and 6 in the image below. I suspect the button toggles the roller wheel between clicking and smooth scrolling, a function I appreciate on the Logitech Performance MX mouse I use with my desktop computer. 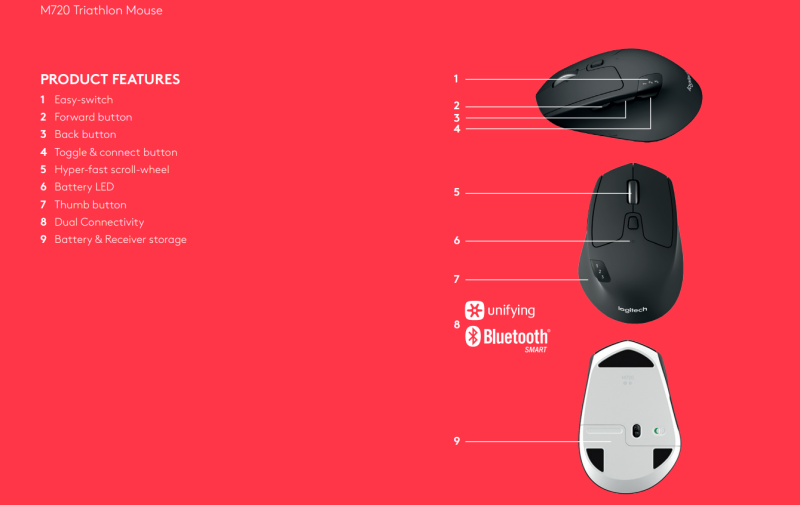 Well, if Logitech says the mouse is only $70, then what price does Amazon attach to it? There, I found it for $40. Be still my beating heart: I saved another $30! I clicked Add to Cart.

Since then, the price from this particular vendor has risen to $60.

Now I was intrigued. Using Bing to search out other prices for this mouse, I see that we can pay whatever we want for it. At time of writing, NewEgg lists the M720 for the following prices from itself and 18 third-party vendors:

There is a lot of talk about monster retailers like Amazon undercutting smaller sellers by monitoring prices. (I wonder if that's why I was presented by the $40 price.) But what about the opposite end of the sales tunnel: smaller sellers overcutting customers by listing prices higher than the one suggested by the manufacturer, then representing them as a savings on the "regular price," as I found at the start of my hunt.

Well, I suppose the lesson here is to not trust a red "on sale" price tag, and to take advantage of the Internet to do price checking. In Best Buy Canada's defense, I have purchased a bunch of electronic gear in the past few months from them precisely because they were significantly cheaper than Amazon.

Posted at 07:00 AM in Behind the Story, Hardware | Permalink

On the almost $500 price on that mouse, as I understand it a vendor may sometimes jack up the price to a "nobody will pay this" level in order to preserve the product listing rather than removing it altogether. The in-stock status (in China) may be more aspirational than real.