Gal Munda (financial analyst): I just had a question around the generative design -- and the exciting news that you basically announced a couple of years after you first acquired [Frustum] -- you launched it as part of a Creo [desktop MCAD] extension now. What I'm thinking about is, how did these modules effectively increase your addressable market in terms of the pricing, maybe how you're thinking about what proportion of your customers are realistically potential customers of it? 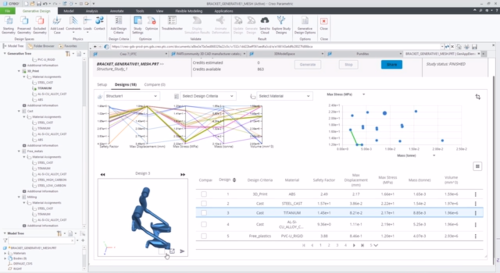 Image from a PTC video of GDX (generative design extension)

And do you think that there would ever be a cross-sell into competitive CAD environments as well? Or do you think that's more of a view into kind of potentially getting replacements into, say, existing Solidworks customers?

But what we've done now, in the second iteration, is put it on Atlas [cloud platform], where there's elastic compute. You can have the biggest computer in the world running your generative analyses for you [You might not afford the computing bill. - Editor].

Let me also say, one of the next steps will be to pipe that generative design capability into Onshape [cloud MCAD], because it's actually running on the same platform as Onshape now. We just got to build it out into the UI [user interface] and the functionality of Onshape.

So what we'll do with generative design is, for sure, will go back to the Creo base. And we will upsell this new module. It's a purchase you add on. And then we'll go into the Onshape base, and we'll do the same thing. I think that generative design is a brand-new idea [Generative design has been around in one form or another since the 1980s. - Editor].

It's a transformational idea, but some of these ideas started a little slow and then really take off once people understand what they can do. So I expect we'll see that pattern. I do think it will give us more competitive alternatives, because I think what we have is unique and special. [Several BIM, MCAD, and independent vendors also provide generative design, also usually in the cloud. - Editor].

Posted at 07:00 AM in Computer-aided Design: NEWS | Permalink