When I finally bought a turntable, it was September 1980 and it was last stereo component I bought while still a university student. I decided on Denon's direct-drive semi-automatic DP-30L model, which cost me $400 -- about $1,000 in today's inflated dollars. Forty years later, this model today sells for $200-$300 on eBay. 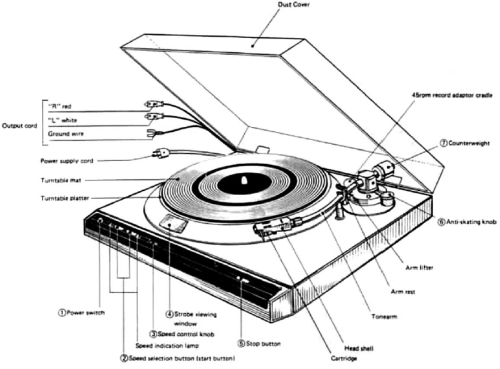 Names of parts and functions from the original owner's manual

For the model name, I am guessing that 'D' is short for direct-drive, 'P' for phonograph, and 'L' for lifter.

(Back then, there were even disagreements whether tonearms should be curved, like on my Denon, or straight.)

A couple of decades ago, the automatic lifter stopped lifting. At the time, it was no big deal to me as CDs and MP3 players were replacing turntables and cassettes. I stopped using the turntable, leaving it on display to show off next to the rest of my stereo system, which I still used.

As records came back in vogue, I wanted the Denon to be fully working again. I checked with a couple of local repair shops, who wanted to charge me $65 to $85 just to have a look at it. I decided to try on my own.

I found the www.vinylengine.com Web site (free registration required), which hosts repair and user manuals for vintage audio equipment. But, as I found with other repair manuals of the era, the instructions are so curt as to be ultimately useless. 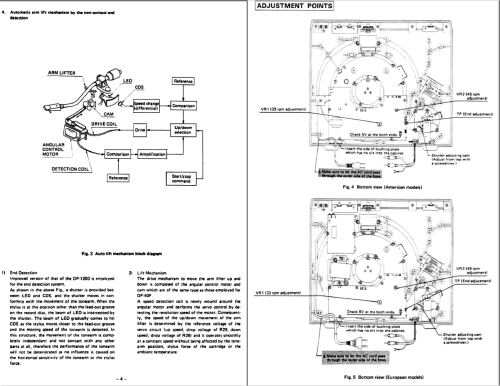 So I decided to have a look myself. As Denon boasted that the turntable featured a "Non-Contact Record-End Sensor" I assumed that perhaps a light bulb had burned out. I did not, however, relish the thought of desoldering/resoldering in possibly tight quarters, let alone finding the correct replacement bulb.

So I flipped it over, and removed seven screws (four are in the feet). The picture below shows what I found inside, compliments of liquidaudio.com.au/denon-dp-30l-direct-drive-turntable-service-repair (my annotations): 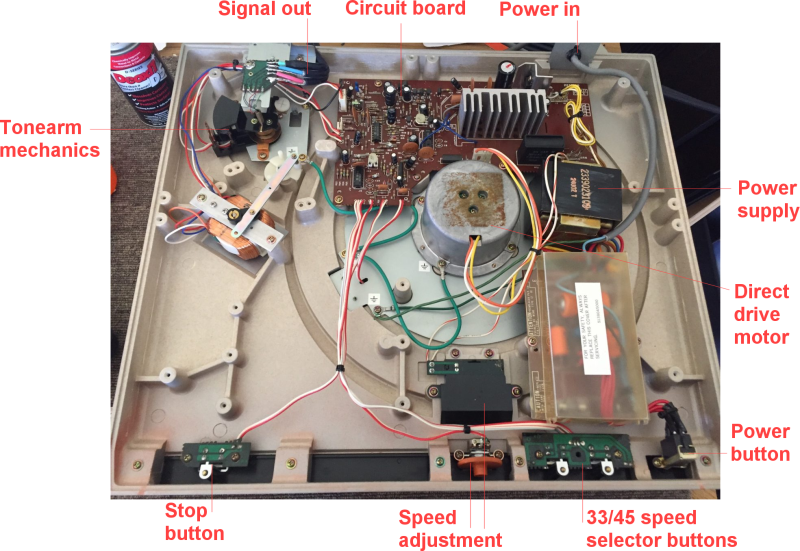 Inside the Denon turntable (front is at the bottom)

Once I oriented myself, I recognized the tonearm mechanicals in the upper-left corner. As I looked around, I noticed that the flat metal arm attached to a white plastic thingy was swinging free (outlined in orange below). The copper coil is the tonearm lifter motor

The white plastic thingy had an axle (circled in green) sticking below it, so it was obvious to me that it belonged in a hole. But which hole was not obvious to me -- there are seven in the immediate area. Fortunately, most holes were too small for the axle, and so I found the right one in which to plug it. I reassembled the turntable.

The puzzle to me is, of course, how the heck did it get disengaged in the first place? Never mind, I was so pleased to have saved the $65 repair bill that I played several records just for the pleasure of watching the tonearm lifting itself as it reached the end of each LP.