I've been arguing for a decade now that CPU speeds slammed to a stop around 2010, and as proof my primary desktop computer, on which I get most of my paid-work done, is indeed from 2010.

That just might make me a hypocrite after buying a new laptop last month, to replace one I got five years earlier. As I explained to my wife, there are three reasons to buy a new computer:

My five-year-old laptop was (at the time) the top-of-the-line HP Spectre 2-in-1 (hinges fold all the way back), which still works well. Well, one of the 360-degree hinges is getting wobbly and it concerned me that a Windows 10 update was delayed for a year due to Microsoft having problems with the computer's audio driver. Also, the silver-colored keys drove me nuts, as they were hard to read, whether or not the back-lighting was on. Imagine lit-up letters on a light background; HP still sells laptops with that dreadful combination.

Ordering a New Laptop: Not So Easy

I initially ordered a new HP Spectre from Best Buy, but Best Buy had only two pix of the device, so then to my horror I later found it had silver keys. I cancelled the order. I found one on the HP Canada site with black keys, and ordered it ($1,550).

Then I recalled that my son-in-law had bought a Dell over an HP. Dells tend to be invisible, as they are sold only through Dell's Web site and so make no appearance on regular outlets. I took a look at the Dell Canada Web site, and I found an equivalent model to the HP for $1,250 (incl. tax), and -- even better! -- I could pay with PayPal. I bought the Inspiron 2-in-1, sat back, and waited for it to arrive.

A phone call from Dell told me I needed to re-order it, as they could not process my payment through PayPal. Odd, given that PayPal from my end had no problem with me. Maybe Dell didn't want to pay the PayPal fees for a laptop that was on sale ($200 off). So I reordered it.

With that done, I got back to HP the very same day to cancel my order for the Spectre. The nice lady on the phone reassured me the order was cancelled. A few days later, I received an email from HP telling that the laptop was... on its way to me. Back on the phone to HP: even though I had been told the order was cancelled, it nevertheless shipped the next day. No worries: HP has free return shipping, complete with paperwork that the UPS shipping office signs as proof I had dropped it off. Once HP gets back the laptop, they take "20 bank days" to refund the credit card.

The laptop arrived from HP, I checked with friends in case any wanted to buy it off me (none did), and by week's end returned the unit, unopened. In the subsequent weeks, HP sent me four more emails letting me know the exciting news that the laptop had shipped and was on its way to me! All fake news, of course.  The refund, eventually, showed up.

So, by paying $200 less, what did I get for my money? All of the main specs were similar, such as 14" touch screen, black backlit keys, 16GB RAM, 512GB solid state drive, and Webcam shutter. Here are the primary differences:

Dell wins: The eight cores are useless for CAD and word processing, but double the speed of processing video files over four cores.

Dell wins: It can take both sizes of cards, with an adapter.

Dell wins: no more freezing cold laptop on my lap! And the brown body is a nice change from corporate conformity.

Tie: I find I don't use a stylus, so its presence or lack thereof is irrelevant.

The Dell shows a microphone icon in the taskbar anytime a program runs that can record, such as Zoom. This acts as a nice warning and lets me toggle off the mic easily. Not having opened the new HP, I don't know if it does the same.

Overall, the trade-off was, for me, worthwhile. Also, I found the styling of the new HP r-e-a-l-l-y ugly. I don't know how long I could have stayed with that black and gold scheme. 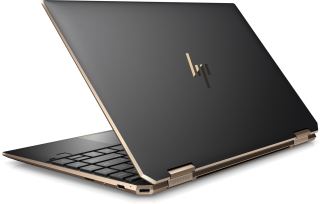 The biggest bugaboo of the five-year-old HP Spectre was its (lack of) battery life. I only ever got four hours out of it. Normally, not a problem, but when I was at a conference where conference organizers forgot to provide power outlets, the frustration level reached ten zillion percent.

The latest CPUs double the battery life and laptops now sport the oval-shaped USB-C ports, which I found from my Acer Chromebook to be very useful.

Here is what the new Dell does that the old HP doesn't:

There is one drawback to the new Dell compared to the old HP. The old HP had both full-size HDMI and mini-DisplayPort outputs, so I could attach two monitors easily. The Dell has the full-size HDMI for one external monitor, but I would need to use a dongle to attach a second one (thru the USB-C port). In reality, this is not a drawback, as I never use two external monitors, except to prove that I can.

A Final Oddity: I cannot find my laptop at the Dell Web site searching through the Dell Website's Search function. I can find it only by using Bing search externally to Dell.ca.

Final Oddity II, to quote Final Fantasy: I never knew Dell gives out Dell Bucks (well, they call it Dell Advantage), which is 3% towards your next purchase. What could I do with $33? I perused the site and found the Dell twist mouse: $25 off on sale, plus $33 off from my Dell Bucks. You twist it one way to flatten it out for travel, twist it 180 degrees the other way for use, and to turn it on. 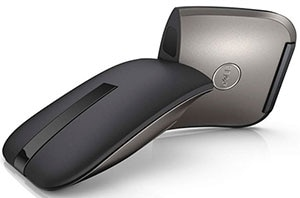 There were some technical hiccups... but fixed. I replaced the original M.2 SSD with two 2TB M.2 Sabrent drives (original intent, and bought my own copy of Win10 Pro. Their M.2 drive prices were too high). The screen is one of the nicest I’ve ever seen on a laptop. It's a touch screen, but I don't use it.

The improvements more than doubled some of the benchmark results.
Another hiccup... when I informed tech that I planned to use larger drives, they informed me that the warranty would be void. When I got the laptop, I spent the first week burning the laptop in by running programs that stress tested it. If it passed, then it would likely last 10 years.

This was the note I sent to Dell tech:
My laptop is up and running; I have a few comments that you can improve on.  I've attached benchmarks of a 'after' and 'factor' issue.  The current machine is great, and vastly improved.
You should not use the M.2 drive that was supplied... it is inferior.  The one benchmark shows the improvement over the factory M.2.  I've thrown better stuff out.  The improvement on the new M.2 does not rely on it being 'raided' to improve the results (improvement is marginal with M.2 drives, anyway) In addition, you should provide the latest BIOS for both the motherboard and the graphics card.  Both supplied BIOS had been updated numerous times.

You should also set the graphics to the default graphics card and not the Intel motherboard processor.  You can see the improvements in the attached files.

Your technical guys should be aware of the above.  I'm still happy with the computer, but am a little disappointed with the original product.

I've also paired it with a Logitech MX Master 2S bluetooth mouse... it's a great laptop.