There's profits to be made from them there million(s)

CAD vendors often give free licenses to educational institutions in an attempt to hook young people on the software early. I've never felt that this is a valid tactic, for when young people enter the workforce, they use the CAD program the boss tells them to use.

Still, boasting about the number of educational users is a pretty good way to goose user numbers. Solidworks, for instance, could at one time be heard boasting of six million users, but five million of those were educational. (Today, the company says it has 3,246,750 users, a number that appears to me to include the low-cost DraftSight DWG editor.) Keep in mind that 6:1 ratio for the next time you hear a CAD vendor lauding its total user number: dividing the number by six gets us a good guess at the number of commercial users -- a.k.a. actual paying users.

As the COVID pandemic unfolded, we saw a real opportunity to help schools and universities, because we have the only true school-from-home CAD solution that works on any device with no installed footprint.

PTC's academic team decided to pivot their focus to Onshape and set an aggressive goal to try to reach one million total education users by the end of fiscal [September] 2021. (To put that in perspective, it's double the number of users that were participating in our education program across all PTC products at that time.)

I am happy to report that already in January, we've exceeded the goal of one million total Onshape education users -- nine months ahead of schedule. 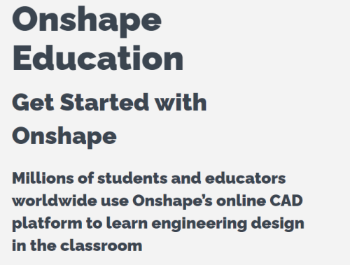 How Many Commercial Users Today?

To figure out the number of paying users of Onshape PTC has now (well, at the end of December, 2020), the company makes us do some math:

Onshape had record bookings, up more than 150% from its initial quarter at PTC one year ago, including a nice balance of new logo activity and expansion.

So, 5,000 x 2.5 (which is what 150% means) = 12,500 commercial users. This number is minuscule compared to the couple of million Solidworks users that Onshape at its launch five years ago had targeted.

When corporate executives talk with financial analysts, they use special insider language. Here is what that sentence means, translated from PTC-ese into everyday English:

So, about 3,500 additional licenses to existing customers and 3,500 to new ones.

Having 80x more educational than commercial users does makes sense. An online CAD program like Onshape looks attractive to schools and universities as an quick solution for remote CAD learning. Schools and teachers are desperate for easy technology solutions to the sudden (and unexpected) demand for teaching remotely -- something for which before now most were never prepared.

Quite frankly, once you learn the basics of one MCAD system, you've learned the basics of all of them; they all pretty much work the same. Most non-technical schools usually teach just the basics of CAD anyhow. So, sure, get students to run Onshape: it's hassle-free, it's got on-line assistance for learning MCAD, and it's free. But not for long.

Still, having one million copies of Onshape accessing servers owned by Amazon Web Services costs PTC a lot of cloud-rental funds. That is the fundamental flaw to the otherwise-lauded move to the cloud: it's become oh-so-expensive for software vendors to offer free versions. This is a big change from when it cost software firms nothing in having free software running on people's desktop computers.

We've not been charging educational institutions for the software. We had a program that you can use it for free for the first year.

So we do anticipate that, as this school year ramps up and we move into next year, we're going to get a pretty decent conversion rate to pay.

If this is news to you, it is not surprising. Onshape's home page does not make plain the temporary nature of free-use plan:

Turns out it's not all educational users that will have to start paying. It's just those who want the assistance in running Onshape thru PTC's Education Enterprise plan. Another page on the Web site explains:

On the one hand, we have Onshape being presented as the no-hassle solution to easily using and learning MCAD remotely; on the other, there is the suggestion that Onshape is so complex that schools need to pay to have it administered for them.

With commercials sales lackluster, it comes perhaps as no surprise that PTC has put some pressure on the Onshape team by having created a new division at the company. It comes with the rather generic name of SaaS Business Unit, and it looks like this:

(Arena is being called Onshape's Windchill.)

"It's a business unit that's quite complete," explains PTC. Here is what the new division is responsible for:

The only thing that PTC will handle for the new division is acquisitions. As the ceo of PTC summed up:

That's a business, and the way I look at it they are paving the path for a future PTC.

PTC seems to be counting on converting most of those Onshape enterprise educational users this fall. It will be interesting to see how many schools pay up. To avoid paying, teachers can have students run the free version, and conductt their teaching through Google Meet and the like.

When 30-year-old PTC acquired Onshape, it enthused that this was the future of PTC. At the time, I warned that PTC's eye would wander in short order, as it has a history of enthusing over a new technology before being beguiled by the next. With the acquisition of Arena, Onshape's CAD segment already looks to be relegated to third place in the hierarchy, next to Vuforia AR software and partner tools.

Posted at 07:00 AM in Behind the Story, CAD: Financials, Computer-aided Design: NEWS | Permalink