Those were remarkable years, in that I could have hands-on experience with hundreds of thousands of dollars of equipment related to CAD. (The most expensive was a $70,000 E-size super-fast Vidar scanner, that in today's dollars would be closer to $200,000.)

I developed testing methodologies to ensure every product in a class was tested identically, and established a rating system that ran from Not Recommended (almost never awarded) to Highly Recommended (rarely awarded); most products were Recommended, because they worked. I had been influenced by the technical editor at Stereo Review magazine, who was hard-core about consistent and repeatable testing that could be validated. This made some vendors unhappy at him, and at me.

The DraftMaster-line of pen plotters from Hewlett-Packard, for instance, usually received the High Recommended rating from me, because they were very, very good. 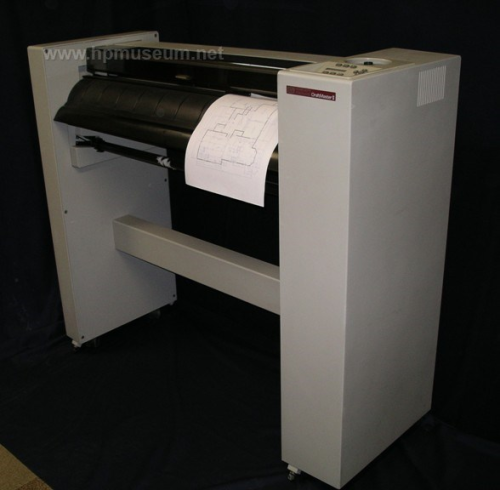 HP DraftMaster E-size plotters were the fastest, most accurate, most expensive pen plotters in the late 1980s

One of the hardware products to which I gave the dreaded Not Recommended label was a pen plotter from Houston Instruments. This company also produced contact lenses.  Their plotters were considered mid-range, doing a reasonable job at a reasonable price. HI plotters I had tested in the past did a decent job.

Then a new model arrived with a bizarre design flaw. First, though, let me explain how rollerbed pen plotters worked. You manually afixed a sheet of paper (D- or E-size) on the plotter's full-width roller with roller clamps that typically were covered with soft rubber or grit for better gripping power. Remember the word "grit." This model boasted a full-width grid wheel.

When plotting the drawing, the pen head moved side to side, while the large roller pulled the paper back and forth. Diagonal lines were made by moving both at the same time, at varying speeds. The figure shows a typical HI rollerbed plotter of the late 1980s: 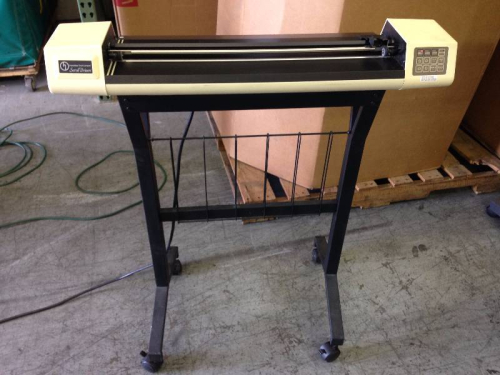 Sometimes, a roller would accidentally spit out the paper, due to an error in the movement codes sent by the CAD software to the plotter, or for some other reason.

As I tested the new arrival, it spat out the paper and continued plotting. Here I discovered the horrific design flaw: the pens were located over the grit wheel, so as the plotter continued its work, it methodically wore down the pen tips on the coarse grit wheel.

Other plotters, including those from HI, located the grit wheel elsewhere in the design. So I had to give this model a Not Recommended rating.

Posted at 09:46 AM in Blast from the Past, Hardware | Permalink

Great article,
Took me into a journey to the past. I remember pretty well those pen plotters, the time they took to print, and how they loved to crash (pen or paper) just close to the end and forcing us to repeat the whole process.
Until the moment that appeared the powerfull HP designjet 650C (if not mistaken), and nothing more was the same...

Pen plotters were horrible and slow, but the technology with the best price-performance of the time. Electrostatic plotters were faster and more reliable, but horrifically expensive.

Memories of getting my AutoCAD hatch spacing vs pen thickness wrong (usually a factor of ten!) and coming to pick up my plot half an hour later only to find a soggy mess of a series of holes through the paper.

Back in the one-stop-shopping turnkey-CAD-system VAR world then, I've set up my share of Calcomps, HIs, and these very same HPs. It was not far from my personal vision of purgatory. You're right, the HPs were a better design, but not without their flaws (how a pen could be knocked out of its carousel and fall down the legs, requiring disassembly to retrieve, was a favorite). Setting up your software to center the plot in such a way so no border edges would be clipped was a sort of black art. It was a case of the tail wagging the dog as frequently the user's border would have to be resized from industry standard due to the space needed by the rollers. Thanks for the wonderful memories (kidding)!