The wave predicted by no one

They're occupying Wall Street all over again 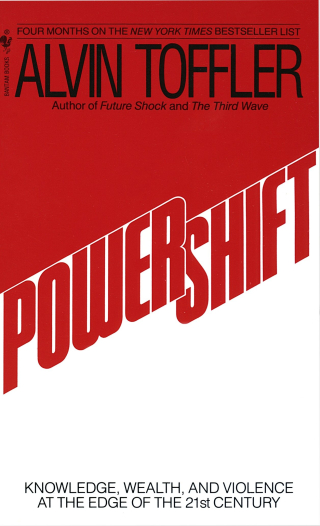 When I first became self-employed, I read widely to understand what I was doing. The most reassuring book I read was Alvin Tofler's PowerShift: Knowledge, Wealth, and Violence at the Edge of the 21st Century. Mr Tofler (d. 2016) was a futurist, who with his wife wrote thick books on what the future could bring, his best known title being FutureShock.

In PowerShift, he told me that what I was doing -- a newly self-employed one-man technical writer, editor, typesetter, publisher -- was the right thing to be doing, because I represented the future. Cheap technology would allow the self-employed to react nimbly to changes in market conditions in ways corporations cannot.

In that, he was right, at least for me. My business took off, and I survived, while over the years established technical book publishing companies shut down around me.

On the 20th anniversary (2011) of me being self-employed, I thought I could celebrate by rereading the book that gave me that initial boost of confidence. It was terrible. The book's most spectacular failure was not predicting the impact of the Internet, even though it was already around, albeit not yet easily available to the general public. I stopped reading the book, but still have it on my bookshelf as a tribute to what it did for me.

Humans, not being machines, err. This is how we learn. When we fail, we figure out ways to not fail the next time around -- usually. PowerShift showed me that a confident, lauded writer like Tofler could rationally explain future developments that sounded right, yet be proven wrong as history unveiled itself in ways unexpected by us. History is independent of our forecasts. Which brings us to today.

Mr Tofler was correct in some predictions, such as forecasting that technology would allow the advent of the micro-war, which we today call terrorism in some cases. The great truth he uncovered is that technology leverages individuals, like me, to have as much impact as corporations and governments.

In light of this, the havoc wrecked by the guy running r/WallStreetBets should not surprise us. He is just one more manifestation of technology being leveraged by individuals into yet another wave that we can call "populist," which has been crashing against the walls of globalism for a decade now.

Until now, populism has been regional, allowing globalists to sniffily condemn it as just-like-nazi nationalism. Brexit, Capitol Hill Autonomous Zone, Thai anti-royal protests, Occupy Wall Street, Front National, Donald Trump, French and Dutch voters rejection of the Lisbon Treaty, and so on. It should not perhaps be unexpected that populism finds itself most popular in the haughty less-than-democratic European Union, and as a result the list of European countries that aren't home to populism is approximately zero.

These movements took on government. Corporations had to be next.

When we techno-ists smugly predicted that software would come to eat everything, we had not an inkling as to how far its acidic effect would spread. As we were in-the-know, we felt immune from its effects. It is, however, now eating at our most precious procession, our retirement funds.

This year the wave grew two-fold as populism went international, and took on corporations.

The initial wave of international populism was quite unintentional. As resentment grew against corporations abusing us thru their obsessive data collection, it became a question of how, not when, the revolt would launch. Facebook, in its arrogance, made the "mistake" of openly telling its two billion WhatsApp users that yet more data would be siphoned from them and sold to bidders (Google, mostly). Facebook gave users two choices: agree, or be cut-off from family and friends (except in Europe, which has an aggressive data protection law).

Given the dilemma between submission or isolation, users choose escape. My family and I switched to Threema. The good thing about the Internet is that most services are replaceable; WhatsApp with Signal, Google Search with Bing, and so on. With tens of millions of users switching in mere days, Facebook put its plan on hold for a few months while it scrambled to figure out how to stem the international populist revolt.

The wave has not yet crashed on its beach. The government of India demanded Facebook take on European-style data protection for Indians. Other governments, seeing an opening to be popular in the eyes of voters, are also tut-tutting over Facebook breaking its four-year-old promise to never access the data generated unknowingly by WhatsApp users.

Occupy Wall Street was a 2011 attempt to protest against the protection given by governments to financial corporations that were labeled "too big too fail." It was colorful, due to the many tents pitched and so the media loved it. Underneath, however, it was a paled effort which collapsed quickly once infrared sensors revealed that nearly all tents stood empty overnight: there was, in fact, no occupation. 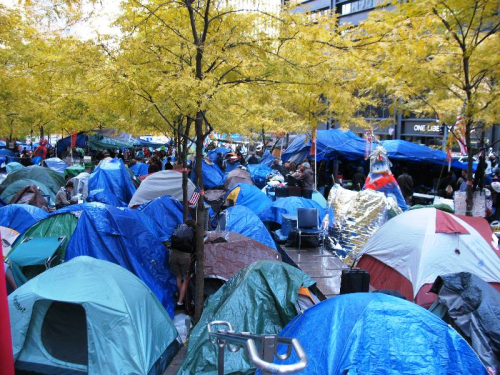 (Canada, by contrast, took the opposite approach. The conservative government applied a rather socialist solution by protecting the small investor, instead of banks, by guaranteeing deposits. The guarantees gave individuals the confidence to keep their funds in the banks, saving Canada from the ravages of an otherwise-worldwide recession. Being a conservative government, it receives no credit for the action.)

Just as rage simmers over unwanted data collection by Internet giants, so too rage simmers over gains by billionaires and financial firms seen as unjustified during the pandemic, a.k.a. China's Chernobyl. The Facebook brouhaha was barely down to a simmer when Occupy Wall Street II emerged from the keyboard of a single person.

To take down Wall Street, the Reddit writer r/WallStreetBets engaged his 3.5 million (or maybe 2.0 million) followers to take advantage of free share trading services offered by the likes of RobinHood. He was angry at the favoritism shown by government in protecting financial giants while amateur investors can go bankrupt.

Shares in lame companies like GameStop and Nokia rose as much as tenfold in a few days. As millions of amateur investors bought ever more shares, share prices were forced up, killing the shorts.

Shorting a stock is where an investor bets a share will fall to a specific price by a certain day. If the guessed-at price is higher than the actual price on that day, the investor profits. If not, then the investor loses. If the investor leveraged the purchase (borrowed money against the share purchase, and so only paid 10% in cash, say), then they really lose: they have to pay the higher price for the shares and pay back the loan, resulting in bankruptcy, possibly.

GameStop was seen as the Blockbuster of the 2020s, a chain of five thousand retail stores in multiple countries still selling games in outmoded physical format. A few months ago, its share price was around $3 and some investors borrowed money to short the stock, confidently assuming that they would profit handsomely when the company eventually pulled a Blockbuster to send the share price into the pennies, perhaps. 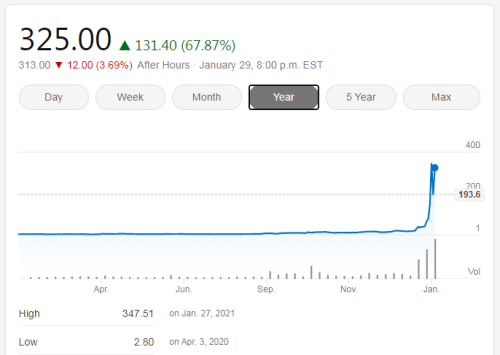 r/WallStreetBets wanted to crush short sellers who profit on suffering firms. He and his followers drove the price of  $GME (GameStop) from $30 to $300 in just a few days. A firm, whose contract required it to pay the current share price that very week, was in danger of utter collapse. Angering r/WallStreetBets further, a couple friends loaned the firm several billion dollars to stay afloat.

Just as Silicon Valley moved quickly -- in just one day! -- to quell discussion of problems that may have occurred during the November USA federal election, Wall Street moved quickly to quell the mass share purchases. Reddit and RobinHood shut down the action -- or, according to some theories, were pressured to shut down by their investors from Wall Street.

RobinHood then borrowed $1 billion to not run afoul of US law, which requires stock trading firms to maintain a float to cover buys, sells, and changes in price during the two days it takes for stock trades to settle.

To retaliate against RobinHood blockage of share trading, the international populists posted negative reviews for RobinHood's app on Google Play Store, driving its star rating down to 1. The next day Google retaliated against its users by removing 95,000 reviews and so bringing bring the apps' star rating back up to 3.5/5. ("Why would Google care?" asked my wife. "I dunno," I replied.)

An hour later, Robin Hood opened up again. During that hour, GameStop yo-yoed between $300 and $200. In the meantime, r/WallStreetBets targeted further firms -- revving up more stocks that had been shorted. Visible financial populists, such as Barstool Sports' Dave Portney, joined in. He came up with this analogy:

Robin Hood of Sherwood Forest stole from the rich to give to the poor. RobinHood of Silicon Valley resembles more his nemesis, the Sheriff of Nottingham, who protects the rich from the poor.

We don't know what's next, because we cannot predict the future; only fools do so, for short-term profit. Twenty-twenty and 2021 are the proof.

International populism is not the kind of globalism that globalists envisioned for enriching themselves, and so they now face the annoying task of scrambling for badly-thought-through preventatives, such as mocking us "The Deplorables" or offering us "The Great Reset."

Posted at 12:58 PM in Behind the Story, CAD: Financials | Permalink