« Worst hardware design ever | Main | The wave predicted by no one »

Amateur traders on sites like RobinHood and Reddit are driving up the value of GameStop, best known as a retail computer game seller. As I write this, $GME is up nearly 10x in one week. And as TechCrunch headlined it, "Gamestop, memestocks, and the revenge of the retail trader." The downside: normally-legit fund firms are loosing billions on shorts and are needing support from other firms to avoid collapsing. 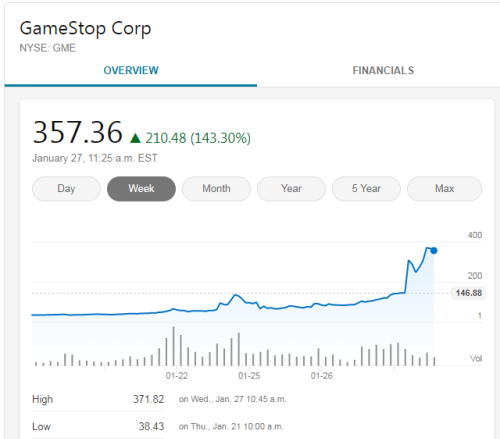 Here are some of the best tweets on the topic:

"People looking for an explainer of the Gamestop thing: The Gamestop thing is like Bitcoin, in that they are both just gambling. At least the Gamestop people aren't pretending they're saving the world when they're recruiting more people on Reddit to get addicted to gambling."
- Ben Collins (@oneunderscor)

"This GameStock trader with an elegant definition of behavioral economics: 'I just figured that the market is completely irrational and that everything I learned in college means nothing'."
- Miriam Elder (@miriamelder)

"Downloaded Robinhood a few years ago and got a free stock (either via a link my brother sent me or just the beginners free stock). Free stock was gamestop. Well..."
-@blindside233

I'll leave the last word to Ryan Broderick (@broderick): "If our economy is hooked up to an Internet dominated by corporate-owned social platforms that incentivize viral-ity, then, at certain point, commerce and viral-ity just become the same thing. But now online communities are big enough and self-aware enough to move the market how they see fit."

Posted at 08:32 AM in Behind the Story, CAD: Financials | Permalink