« Translating textures from one file format to another | Main | Solved: Audio driver keeps disappearing in Windows »

Upgrading an old PC to the HDMI era

I decided to replace my wife's computer.

It is a 64-bit machine that -- curiously enough -- runs 32-bit Windows 10. Even though I had upgraded it from 2GB to 6GB RAM (for free, using spare memory modules from older computers), 32-bit operating systems see only 4GB -- it's an addressing limitation inherent in 32-bit computing.

As well, Microsoft really didn't want to update the Windows 10 running on it. I made a few manual attempts to update it, but Windows just wouldn't give in.

Microsoft was seen as foolish when it said it would always update Windows 10. Apple controls all the hardware, and even it still suffers from upgrade problems to its proprietary operating system. My wife's desktop was not the only one to suffer abandonment issues: my HP Spectre laptop was also in the doghouse, upgrade-wise. (Spectre is HP's topmost brand of laptop, so I would expect the highest level of support.) The Spectre was running Windows 10 from 15 months ago -- two updates behind the pack. It turns out the problem was with two drivers involving audio causing BSODs [blue screens of death], and Microsoft finally got them fixed this week.

It is possible to upgrade a computer from 32-bit to 64-bit Windows 10, but the only way is to wipe the machine. So I decided to buy my wife a "new" computer. Typically, I buy lease-return, business-oriented, small-form-factor, HP desktops. The new one cost $150.

I copied all her files to a portable SSD drive, and then I got her new one up and running. It was pretty easy, as she uses only a Web browser and Libre Docs.

Then I turned my attention to the old one. It was now a project computer that took me four days to complete, on and off. As I told my wife, for Christmas I could have either bought myself a 4,000-piece Lego set for $350, or spend $150 (on her new computer) and have a lot more fun with her old one.

As part of the process of installing 64-bit Windows, I had Windows destroy the hard drive's partition, recreate it, and then format it. Here is the curious part: later, when Windows was up and running, it had maintained the Old Masters wallpaper that my wife liked. Curious.

With Windows updated to 20H2 and running on 64 bits, I turned to the hardware. The old HP suffered from these limitations.

I set about solving the problems.

This computer is not that old, so I wondered why it didn't even have a DisplayPort port (which predated HDMI). Perhaps it had only VGA so that the security functions of HDMI/DP would not get in the way: the business could then use non-security-oriented cables and monitors. Or maybe leaving out HDMI was just a cost factor; VGA is, after all, capable of 1920x1080 resolution, like HDMI/DP.

(VGA is short for "video graphics array," the high tech name IBM gave its hot new 640x480-resolution graphics board in 1988.)

But modern devices, like my movie projector, expect HDMI input. To solve the lack of HDMI, I ordered a generic-brand VGA-HDMI converter ($15). See figure below. Be careful which style you buy, as some adapters only go the other way, from HDMI to VGA. 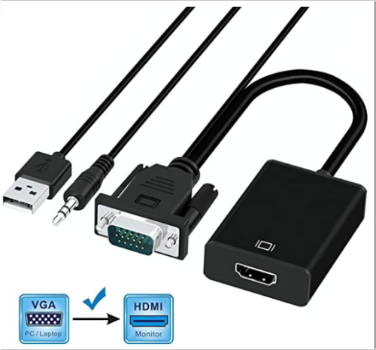 Much to my surprise, it worked, albeit the 1920x1080 image is slightly blurrier than true HDMI output. Movies on Acorn worked well, but Netflix was pretty coarse; I don't know if that was just a bad transmission that evening, or if it was Netflix detecting the VGA source. I might still buy a graphics card to get true HDMI, which I see cost about $55.

This computer had no WiFi, and I can see why a work computer would lack it: so that data could not be stolen over the air. On the other hand, this compact machine is festooned with 10 USB ports, a workplace security nightmare. It even had a serial port!

To solve the limitation, I looked for a WiFi adapter to plug into the inside of the computer. But as I looked, I found that they really don't exist anymore, at least not new.

So I bought an external WiFi adapter that plugs into a USB port ($30). This is the D-Link Wireless AC600 Dual-Band USB adapter. It is the size of a thumbnail, yet has the WPS button (in gray) and a green flickering LED to indicate data transmission; see figure below. 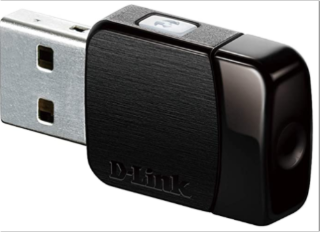 When I first inserted the USB adapter into the computer, Windows asked me what I wanted to do with it. Huh? This came as a surprise to me, as I had expected Windows to automatically find the device driver for the WiFi dongle. But it turns out that the adapter has a small amount of storage, about 8GB -- like a USB drive -- that holds the setup software. Brilliant! -- once I figured it out. No installation CD to lose.

So Windows sees it as a disk drive, initially. Set-up was a matter of double-clicking on the drive letter, double-clicking the setup.exe file  Once the WiFi driver was installed, it worked well.

I took advantage of that WiFi being USB. I got a long USB extension cord, and then plugged the WiFi adapter into the end of it. The extension cord places the adapter closer to my WiFi hotpot.