« Solved: Audio driver keeps disappearing in Windows | Main | Why BIM Does Not Work »

Speeding up a solid-state drive

I had been using a tiny Gigabyte computer to power my entertainment room. All it needs to do is run a Web browser, through which we watch Acorn, Britbox, YouTube, and the others.

In recent years it suffered from two serious flaws, which I detailed in worldcadaccess.com/blog/2020/10/its-hard-buying-a-chromebox.html:

At first, I thought that problem 2 was due to CPU overload, but it turns out the crawl is due to the storage drive running at 100% for long periods of time. This surprised me, as the drive is a solid state drive, that Windows only has to run a Web browser, and SSDs are supposed to be fast.

My first solution was to look online for reasons why drives run at 100%, and tried a half-dozen suggestions, like turning off indexing. None worked.

My next solution was to add more RAM to the computer, so it now has 12GB instead of 4GB, but this did not solve the problem. Windows normally uses only half of the available RAM, so a 4GB system runs on 2GB. When there is not enough room in RAM, Windows automatically pages the overflow to the hard drive, which can slow things down.

Now, this computer is seven years old, and so I wondered if its 64GB SSD could be a slow one, being so old. A 64GB solid state drive suffers from having half the data lanes of 128GB and larger SSDs, hence it is inherently half as fast. 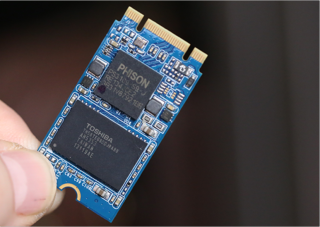 So I though of replacing the SSD. Buying one large enough, like a new 240GB drive, would boost the read/write speed by 4x. I wondered if 4x speed increase would actually solve the problem, and this would be an expensive way to find out.

The other problem in buying a new drive becomes how to clone Windows from the old one to the new SSD. It is the short M.2 mSata style; see image above.

One solution is to buy an NVMe-to-USB adapter ($30), then plug the adapter into the computer's USB port. After that, use cloning software to precisely copy everything (including Windows) from one to the other. But the combined cost of a new SSD and USB adapter was getting too high for me.

I mulled things over.

RAM! The computer now had lots of RAM, and so I wondered if there still were caching software around. We used to use caching software a lot in the old days, when we operated off floppy drives and slow hard drives. I outfitted my very first computer, a Victor 9000 from 1983, with a then-massive 128KB memory board, and ran caching software on it just to hold the spell check dictionary for WordPerfect v5.x.

The idea behind caching is that a part of RAM is set aside as the cache (storage); software thinks it is still working with the drive, but the cache fools it. The caching software transparently moves data to and from the drive. Because the cache is in RAM, it works very fast.

TIP: There are two kinds of caching software. One uses a portion of RAM to shuttle data between the software and the drive (like we need here).

The other kind turns part of RAM into a drive, complete with a drive letter like Z: (like I used for that old WordPerfect spell checker). We want the first kind.

So I bought a cache program ($30), installed it, and set aside half (6GB) of the RAM for it. Now the computer purrs.

It is, however, slower at starting up, as the caching software starts up uncached, and then data is doing that initial move to the cache.

The caching software comes with a dashboard that reports how much RAM is used for caching, so after a while I was able to reduce the cache from 6GB to 4GB, leaving 6GB for Windows.

Tip: Samsung EVO and PRO solid state drives include caching software free, which is why I tend to use that brand. Your computer needs at least 8GB RAM for Samsung to implement the cache.