There is one reason, and one reason only, why Apple is moving to its own, proprietary CPU: to further lock in its user base.

Windows and Linux can run on Apple's computers only because they use Intel CPUs. With Apple's switch to ARM, Mac-labeled laptop and desktop computers become less flexible and so far less desirable. They can no longer provide "the best Windows experience," as some enthusiasts like to put it.

The experience of Google and Microsoft in using ARM CPUs (to replace Intel/AMD CPUs) on laptops is not good. Sure, they get 5G connectivity and longer battery life, but that does not compensate for sluggish operation and, in the case of Windows, incompatibility with important software.

This is being repeated in the Apple world, where third-party software is slow in arriving, especially software that Mac users depend on, such as from Adobe. One CAD vendor that has been candid about Apple's switch is Vectorworks, who are working on making its software work on the new CPU, but has no timeline for completion. Adobe's "next summer" statement is sufficiently vague to allow for delays and worrisome, given third-parties have already had a half-year's headstart on rewriting their programs. Meanwhile, Apple ships the new MacOs for the new Macs now.

Third-party vendors might, of course, be just a little bit ticked off that they need to do all that code re-write just to stay in a sliver of a falling computer market, one in which Macs in 2020 Q2 sold a mere 6.7% of all personal computers worldwide -- down from 7.4% a year earlier.

The telling part is all that Apple left out of the the presentation and the misleading charts that purported to show the necessary superiority of its ARM CPU. Here are some of the complaints from the tech media [with my responses in square brackets]: 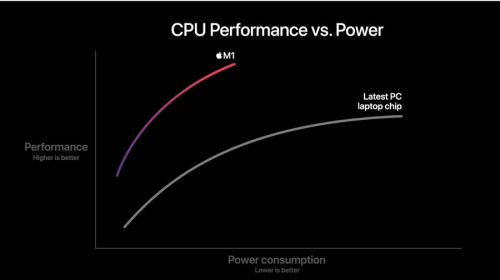 As Frank Riff put it, "For those who hoped that Apple was going to use the Apple Silicon transition to course-correct on issues such as ports, Touch Bar, and perhaps introduce a new design language or new iOS features such as FaceID, tonight was a bitter disappointment."

Apple bases its claim of a 3.5x speed increase on benchmarks it did not make public, against Windows PCs whose identities it kept secret. This tells me the company has much to fear from the switch once independent benchmarks pop up in the real world.

I don't like Apple products. I find the hardware limiting (who ships overpriced laptops without touch screens, and crams ports too tightly together? Apple!) and the software irritating (who designs a mobile touch interface with an inconsistent Back button? Apple!).

The sliding market share of Macs forces Apple to compete against Windows users, rather than for Mac users -- Windows users who  spent the last two decades showing no interest in Apple's fenced-off products.

I admire Apple's gamble on switching to a power-efficient CPU that it manufacturers to its own spec. As I see it, however, the gamble will not pay off.