Well, it's 7:00am here on the West Coast of North America, and Spatial 3D Insider Summit should be starting right about now.

I've attended a couple of them before, once in Colorado at at resort so high in the mountains I had a day of splitting headache (from the lack of oxygen) until I got my hands on some tylonol. Then again in Munich.

The Spatial 3D Insider Summit has nothing to do with geographics or mapping. It's the component arm of Dassault Systemes, which'll sell you an ACIS or CGM license for your budding CAD project. Attending the Insider Summit is like attending the OpenDesign Alliance annual conference: you get the head's-up on new technology that (might) be powering your favorite CAD program next year.

For its online conference, Spatial decided to use the VR [virtual reality] gimmick. This requires attendees to download software from a third-party, install it, sign in with the same uid/pw as we registered for the conference, and then take part. 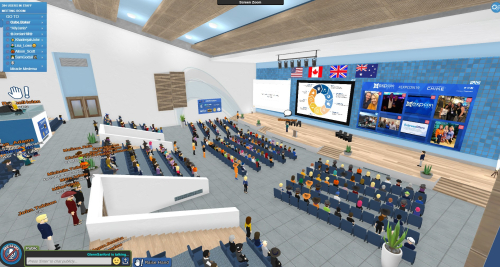 I downloaded the software, but then couldn't be bothered to install it.

You know, when it comes to online conferences, I am a passive observer -- well, except for the frantic typing. If I have a question, most online conference services have a Questions or Comments panel. The extra effort of being interactive in 3D just isn't my schtick.

I suppose the folks at Spatial thought, "Hey, this is a conference about 3D, let's hold it in 3D!"

Thing is, even in 3D CAD we interact through 2D.

So, no reporting on the Summit from this Insider.

Posted at 07:27 AM in Travelogues | Permalink

Like you, when I saw the required download, install, sign-in, avatar, etc. sequence, I just said to myself "No thanks" . . . Curious what the attendance was.