Who Had the First DWG Editor?

I always thought Softsource's VDraft was the first CAD program to use DWG as its native file format, but it looks like Graebert beat it with Felix CAD by about a half-year or year.

Digging through the historical record, it appears that Felix CAD was first (1995) and VDraft second (1996). Both were developed independently from Autodesk and from each other. Felix CAD in Germany, after Autodesk took away the European AutoCAD distributorship from Graebert, and VDraft in the USA based on a DWG/DXF plug-in it had written earlier for Web browsers. I ended up writing documentation about both CAD programs. 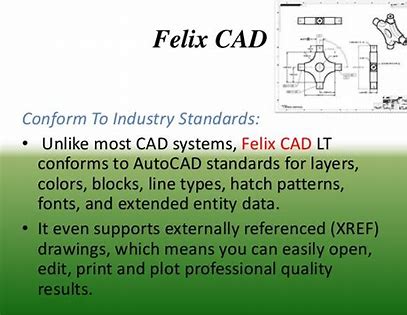 The history of Graebert reads, "The first release of Felix CAD in 1995 was 100% written in-house, including the code to read/write DWG files." Felix CAD today is known as ARES Commander.

We here in North America didn't know about Felix CAD, which is why, when I wrote an email in January 1996, I said, "The February issue [of the CAD++ newsletter] will feature the premier article on SoftSource's new $500 CAD software that uses AutoCAD DWG format as its native format -- the first AutoCAD clone."

VDraft boasted multiple windows for editing DWG files, which AutoCAD, at the time, could not do

The first knowledge I had about Felix CAD came in an email from March 1996 written by the German translator of my CAD++ newsletter. He reports interest from "Mr. Stahnke of Felix GmbH." (Mr Stahnke is still with Graebert today, continuing in his role as OEM and Partner Manager.) The Web site at the time was fcad.com, which now is hosted by "Fine Chemical Application Development Corporation (commonly referred as FCAD) is the world's leading fine chemical company."

I need to note that Felix CAD was not the first non-Autodesk product to read and write DWG files. There was a distinction back then, as there is today:

DWG Compatible. Some CAD programs can read/write DWG files, translating them to and from their own native format. In this regard, I believe that Microstation from Bentley Systems was the first DWG-compatible program.

DWG Based. Other CAD programs use DWG as their native file format, a much tougher programming job, and that is what we are talking about here.

Then the market exploded. All kinds of independent developers were writing APIs that could read, display, and write DWG files. In August 1997, Roopinder Tara and I talked about me writing a comparative review of DWG-compatible software for Cadence magazine. Our initial list consisted of

(Those in boldface use DWG as their native file format; the others could read and/or write DWG files to/from their native format.)

Today I count over 30 programs using DWG as the native file format. Most are based on IntelliCAD, some on Graebert's ARES, a very few are developed independently, but all use DWG read-write libraries from the OpenDWG Alliance (now Open Design Alliance), which was launched by Visio in late 1998.

If we want to talk about the really first in DWG, then we need to jump back to 1988, when a Dutch company, Cyco Automation, released the first ever DWG viewer. They had cracked the code in how to parse DWG files and then display the result in software that did not rely on Autodesk. 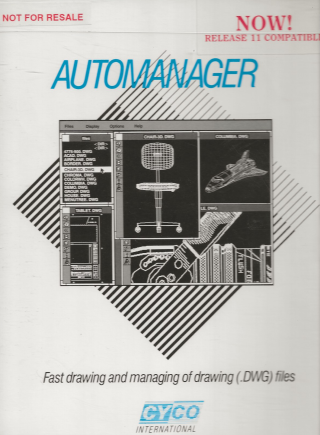 Packaging for the first release of AutoManager, showing its DOS interface

Their DWG viewer, called AutoManager, was such a breakthrough that we didn't understand the point of it, at the time. For us, working at CADalyst magazine, we would just fire up AutoCAD if we wanted to see the content of a DWG file. This was under MS-DOS, where you could (for the most part) run only one program at a time. Choosing between AutoManager or AutoCAD as to which program to run, it just made sense to start AutoCAD, as it did more than just view DWG files.

Then Autodesk went to war over DWG, but that's a whole 'nother story.

Posted at 07:00 AM in Behind the Story, Blast from the Past | Permalink