« Who Had the First DWG Editor? | Main | Seven tips for working with Substack »

Now is the time to cancel MailChimp

"In our sole discretion"

About five years ago I was looking around for the mass email service to take over my homegrown effort. I was spending too much time updating the mailing list, and there were firms who promised to take the work over for me -- for a fee, 'natch. I settled on MailChimp, and for the most part it worked mostly to my satisfaction, at first.

I have just two needs in sending out my weekly upFront.eZine newsletter:

Once the relief of no longer having to maintain the mailing list began to wear off, however, I realized just how much convenience was costing me. Translated into my local currency, it came to about $960 a year.

Like most similar services, MailChimp charges on the basis of how many subscribers you have on a mailing list. To reduce my cost, I began manually paring down the list, removing those names MailChimp found never opened the newsletter. Over time, I got the list down to the lowest price level, costing me about $600/year.

No sooner had I cut my cost to the lowest level possible, MailChimp increased the price by about $120/year. Their excuse was that they were adding so many new functions -- none of which I would ever use, nor even asked for. That both events happened in the same week so irritated me that I began looking for alternatives, but found none that satisfied me.

We're All in This Together, Except When We're Not

During the summer of COVID-19, MailChimp hit its customers with a one-two punch. First, it made a massive change to its user interface that reduced the names of major functions to inscrutable icons. That was the next breaking point for me. I should not, as a customer, to be required memorize the meanings of icons.

This move highlights one of the primary drawbacks to working with cloud-based software: customers cannot freeze releases to stay with a version that works for them best. This is the reason some of the desktop software upon which my business depends is frozen at releases that came out in 1998, 2000, 2007, and so on. Visio 2000 works just fine, as do Eudora 7 (2007), PaintShop Pro 6 (2000), and Word 2007. Perhaps that was the golden era of software.

Another drawback to cloud-based software (of which I use little, one of the exceptions being this blogging service) is the hesitation of speed. I was one of those who endured the early PC era, where everything seemed painfully slow. The cloud returns us to the 1980s, where I am forced to wait for a screen to change, wait for a file to save, wait for text to update, wait for a preview to show up. Pretty much every interaction is click -- wait -- click -- wait... MailChimp, in trying perhaps to be all things to all marketers, seems to have a lot of code slowing it down.

By late summer MailChimp was piling up demerit points from me. Getting more expensive, inscrutable interface, slow reaction time.

The final straw that broke my camel-like patience was a second price increase that arrived in the early fall, even as the second wave of COVID-19 hit the world. We truly are not all in this together. Again, the same lame excuse that they were adding all kinds of new functions for which I have no use. I was now up to paying about $800 a year to send out my free newsletter on their cheapest plan.

Ratcheting up the cost

Over a period of 2-3 weeks, I signed up for a half-dozen mass emailing services. A couple of them I got seriously involved with, trying to make them work with my newsletter.

Hot tip: All of them import email lists from competitors (usually through CSV format), so remember to export your list before cancelling a service. Some also will import your newsletters.

One, Sendinblue from Paris, was promising in that their annual price was $300 -- about 2/3 cheaper than MailChimp. Tech support was wonderfully responsive. I paid the fee.

But their editor was bug-ridden, including a very weird bug where sometimes it would add a line of JavaScript on its own, and then announce it could not save the document -- because it contained JavaScript. I reported it, and the techies fixed it in a few days. (Even weirder, the JavaScript pointed to a legitimate Web site, making me wonder if a programmer had been copying'n pasting code.)

But it was the second major bug that killed Sendinblue for me: It would not upload most JPG and PNG images to my newsletter. It complained, "File format not valid." That bug the techies never solved by the time I cancelled my account.

Two upFront.eZine newsletters went out with Sendinblue, and this is why they lacked images to illustrate articles. Remarkably, and to my relief, they refunded my fee, pro-rated, so I lost only about $10 on the experience.

Another one I spent time with was MailChimp's largest competitor (I think), Constant Contact. Their big advantage was (or so I thought) that they cost almost as little as Sendinblue. They automatically offer free telephone support to get new customers going. Very lux.

Again, the problem was with images. The live tech support person spent several phone calls with me to figure out my situation, which, on the face of it, is so simple: click a spot anywhere in the newsletter, insert an image file from my computer's hard drive. Both MailChimp and TypePad (this blogging service) do it, so I was left puzzled why so many mass mailing services I tested WON'T do it. Constant Contact had such a weird multi-step workaround that I can't even describe it. Even more weirdly, the techie told me Constant Contact had no plans to repair the problem. This was disheartening to hear.

The entire time I was telling other CAD editors about my experience, and one of them warned me that Constant Contact was known for being very expensive, a claim I found puzzling. When I first signed up, I told Constant Contact I had under 5,000 subscribers, and the fee quoted to me worked out to about $350/year. Some days later, I went to check their range of plans, and the quoted fee shot up to something like $1,200 a year. Yikes! This made MailChimp, in comparison, cheap. The huge change in price made me pretty angry. All that time wasted.

The reason for the Constant Contact name is the constant contact from their sales team. At the end, my contact hung up on me in disgust, as I seemed incapable of grasping all the wonderful features they would offer for their exorbitant fee. Never mind that I didn't need them. The customer is always wrong.

Fun fact: All of these mailing services stringently check that your mailings could not be considered spam. Indeed, two services refused to take me as a customer because the domain of my email address (telus.net) did not match the domain name of my newsletter (upfrontezine.com). Some, however, effectively sent me spam, as they left out the legally-required Unsubscribe button in their email communications with me, even after I cancelled my accounts with them.

Frustrated, I began looking at the mass emailers were being used by the emails coming in to me. One was Substack. I remembered I had a Substack account, which I had signed up for it at some point, but had never investigated further. In desperation, I tried it. It offered the two things I needed most, at the price I wanted most: free. They even allow ads in newsletters. They make money by charging 10% if you set up a subscription fee through their system.

The formatting is very limited; there isn't even a way to center text! At least they let me punch in an image anywhere I need one.

So, in the end, after checking out a half-dozen mailing services, upFront.eZine now goes out with Substack. I do worry, however, what this venture-funded service might change in the future.

Then  the news came out this week that MailChimp changed the Standard Terms of Service. It had decided to go all Twitter on its customers. 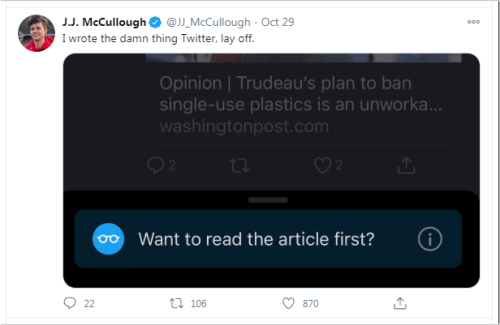 MailChimp added the paragraph that I highlighted in yellow in the screengrab below, in which it promises to read all the emails you send out and block those that -- in its sole discretion -- it does not like. "Sole discretion" means no appeals:

As a publisher, I am hard-core pro-free speech. Just in time, I had escaped MailChimp. It may be worthwhile for others -- in our sole discretion -- to cancel MailChimp. There is, of course, no guarantee that Substack will escape the attention of the Woke brigades, but for now it remains a sanctuary site. 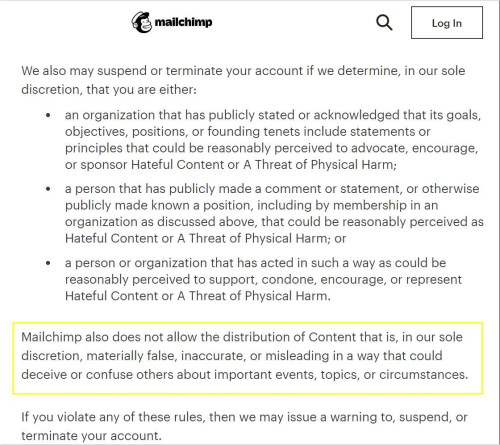 MailChimp's desire to be the Twitter of your newsletters

Posted at 10:28 AM in Behind the Story, Impractical, Internet, Media and/or Spin | Permalink

One addition to you latest post on mailing software. If you can run
PHP on you webserver, one thing to look at is PHPLIST. Does all you
want, for free and completely under your control.

The problem with a home sever is that my isp thinks I am sending out spam when I send more than 100 emails at a time. Then they block _all_ my emails.

I used to use GroupMail for sending the thousands of emails for many years from my computer. But before sending out the newsletter, I needed to contact the isp to whitelist me, and then wait a few hours for them to implement it.

The whitelist would last 48 hours, so I had to do this every week. Final, five years ago, they told me they would no longer provide the service. That's when I signed up with MailChimp.

Further to your comments about the icons in MailChimp: I agree wholeheartedly! I HATE ICONS! Especially when they "update" them (read "redesign") with each new release. I find that I spend an inordinate amount of time hovering over each icon in turn, waiting for its tooltip to appear so I can read the word to see if its the one I want. Traditional Chinese uses something like 450,000 icons while the introduction of modern Chinese managed to cut it to about 4,500 depending on who you ask, AutoCAD uses over 1,300, but Eupoean languages can say pretty much all you need to say in just 26 basic letters, 10 numbers, and a dozen or so punctuation marks.

When I met Duff (a founder of Autodesk, for those who don't know), he told me he had pretty much single-handedly written all the AutoCAD manuals through at least Release 10.
Unlike Bill Fane, I like icons—well, some of them—especially when I create them myself so I know what they mean. But, I have found Mail Chimp to be a cryptic experience at best during the many times I've had to use it.

He certainly set the standard for technical publications, and I appreciated him for that.

DIsappointing, then, that Autodesk subsequently forced only icons on the status bar.