As the Palm Pilot era was beginning to wane, I began to look for a replacement. I had bought my first Palm Pilot, the original, in 1996, and then bought nearly every successive generation after I found it to be the most productive tool for me -- ever. Its simplicity meant it was efficient, and I demand efficiency.

The iPad Touch from Apple was enticing, and so in early 2010 I bought one of the third-gen models. I knew from experience that it was best to buy a device with the most available storage RAM, and so I got the 64GB model. It was not cheap (Apple charged me an extra $100 for the added 32GB RAM), and it lacked a camera and GPS, despite having the incongruous Photos and Maps apps. I never did fill up the 64GB, and so could have saved me a hundred bucks.

Nevertheless, that first night I was entranced by what a modern, WiFi-enabled, touchscreen device could do. I was up until 1am exploring it.

It was at the same time remarkable and limiting. I found the closed Apple ecosystem, lauded non-stop by its compatriots in the tech media, stifling, me having been spoiled by the richness of Palm third-party development. The lack of a camera on the iTouch was dismaying, and I found the skeuomorphic GUI just awful.

Eventually, I gave it to my daughter for her time studying in England, and later that same year I bought the first Galaxy phone from Samsung, the Android-based Galaxy S I9000. Its GPS never worked properly, but it otherwise proved that Android was the open platform for me.

Yesterday I hauled the rather fat and tiny iPod Touch 3rd Gen out of the drawer and charged it up. The aluminum back is so scratched that I can no longer read the small text on it, and it took me a while to track down which model it is. 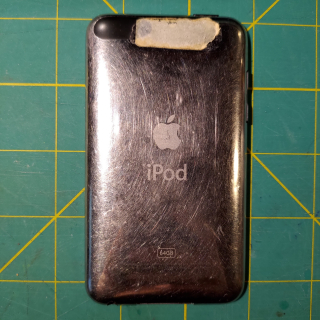 Aluminum back, after a decade of scratches

It runs iOS v5 and most apps still work. Exceptions are apps that rely on external providers, such as the Weather, YouTube, and Newstand apps. The iTunes app still works, and for a device meant to play music, it is really the only one that matters. I found that I could download songs I purchased on iTunes from over the decade. It runs slowly, but not frustratingly so. 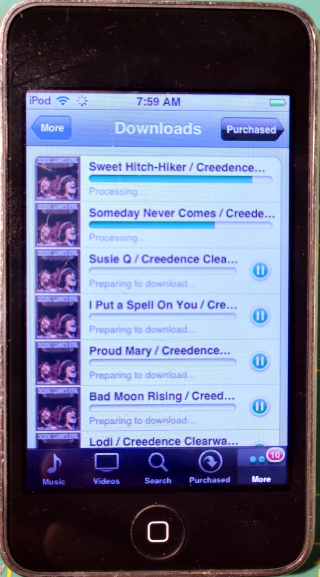 I connected its old Bluetooth (buried under Settings | General | Bluetooth) to my new Bowers and Wilkens P7 headphones. Listening to acoustic jazz albums like Ralph Towner's Solstice and Steve Kuhn's Pastorale reveals that the Touch offers up remarkable sound, albeit with the occasional hicough as the high-bitrate AAC data stream overwhelms the 600MHz CPU.

Even though it introduced me to the post-Palm world of modern mobile devices, the iPod Touch was for me, in the end, never more than a curiosity.