From Cassette to MP3

For my daughter's upcoming major birthday, her husband wanted to make a playlist of the music she used in her figure skating routines. It was my job to hunt them down.

One song was on a CD, so that was easy to convert to MP3. There is lots of free software that does that, even iTunes will do it once you jump through the correct hurdles.

Another song was on a cassette tape. There was a time when I had hundreds of tapes, which I listened to, to spare wear and tear on the roughly 400 vinyl records I had bought. There were also many tapes I made from radio stations around the world, from the mid-70s to the mid-90s, and so there was a time a couple of decades ago when I converted all those records and all the tapes to MP3 files.

In the case of my daughter's figure skating piece, this meant remembering two decades later how to covert music from a cassette tape to an MP3 file. It takes the correct hardware and the right software.

I dug out my Pioneer cassette deck from storage, and was pleased to find that it still had attached the RCA-3.5mm cord that I needed. 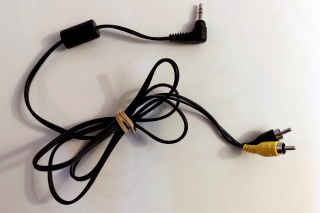 The RCA ends plug into the back of the cassette deck, into the LINE OUTPUT ports, one each for the left and right channels. 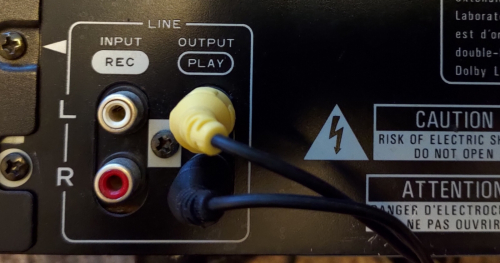 At the other end is the 3.5mm plug, which goes into the computer. Not just any computer nor any port. It needs to be a computer that has a Line In port. Most today lack it, as most have a combo plug that handles microphones and headphones in a single 3.5mm port. An older laptop of mine had two ports, one for headphones and the other one for a microphone. 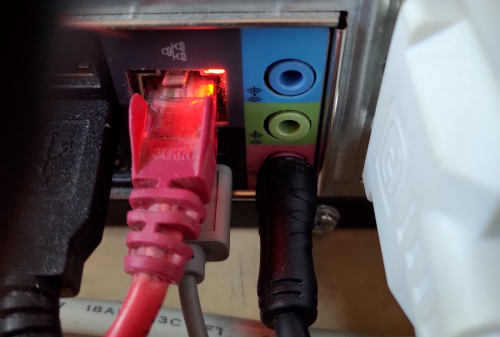 3.5mm plug attached to a computer's pink Line In port

You cannot use any of these with a cassette deck, as the output volume from the deck is too loud, and you will record mere noise -- distortion, actually. Microphones have a much quieter output than the Line output from a stereo component, and so the computer boosts the volume for what it thinks is microphone-level sound coming in.

You need software that reads the sound coming into the Line In port, and then converts it to an MP3 file.

In the past, I used Quintessential Music Player, aka QMP. It has all kinds of wonderful tricks built into it, but is no longer supported. For instance, it can read a stream from an online radio station, separate each song out of the stream, and then give each song a filename made from the musician-album-title.

I fired up QMP, and set it up to read from the Line In port: 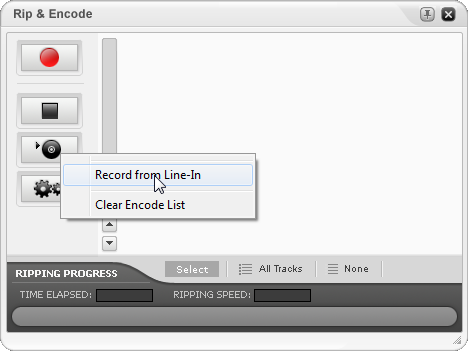 Selecting the input from which to record

Make sure that the recording will be saved in MP3 format: 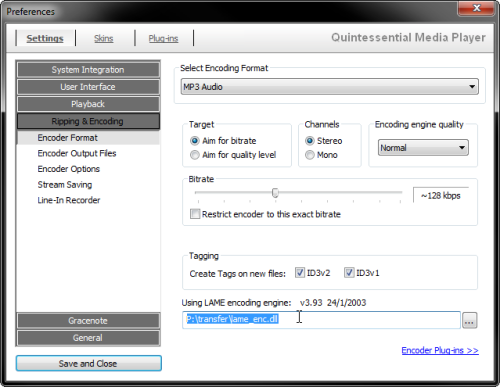 Settings in QMP to record in MP3 format

But it complained that the MP3 encoder, called Lame, was invalid. Huh.

I searched around the Internet for Lame, but had a hard time tracking it down. (Lame is an open source MP3 encoder, whose name is an acronym for "Lame Aint an MP3 Encoder," a self-referential acronym typical among ironic Unix programmers.) I knew I had QMP installed on an older laptop, but when I fired it up, QMP complained of the same problem. Huh.

By chance, I found I had another MP3 converter program on the laptop, and it had the Lame DLL (dynamic link library) that I needed. I used Gmail to send the file to myself. Google, in the infinite wisdom of its A.I., said, "Nope." Huh.

I encountered this blockage before. For me, the easiest way to copy a file from one computer to another is to simply email it to myself. Lately, however, Google has been blocking me from sending myself files it considers dangerous, such as DLLs and APKs. Google, after all, knows better than me what is good for me. If level of censorship represents the future of computing, I want no part of it.

The workaround, of course, is to use something like Dropbox, or PCloud, in my case. The Lame file transferred between computers successfully. (Thank you PCLoud for not censoring me.) Through the Ripping and Encoding preferences dialog box, I told QMP where to find the Lame file, and it was happy.

There is no automation for the actual recording activity. It takes two steps:

Converting the two-minute song took about me about two hours.

Posted at 07:00 AM in Blast from the Past, Hardware, MP3 Players | Permalink

When emailing a DLL or other suspected file type (MSI, EXE, &c.) to a friend, I rename the file type to something inoffensive. For example, I rename MyUseful.exe to MyUseful.txt and include a note to rename the file type back to exe. Good enough for most email systems.
An anti-virus program still might intercept it. For that, I might compress it (ignoring that the resulting file may not be smaller) and send it as a zip file. The anti-virus software might flag the file but usually lets it through with a warning.

I have tried that trick but I find that Google parses the content of the file in order to determine whether to block it. This is concerning, as Google could become like Twitter and block emails because their political content.