Expect Creo-on-the-cloud in a few years

The shoulders of Atlas grow longer

When PTC purchased Onshape, it wasn't just to help Onshape get rid of its huge debt to early investors. That was just one reason.

As PTC ceo James Hepplemann put it last week, "If the Onshape acquisition seemed expensive, I mean, it was." It was, after all, not just the $470 million that's been talked about in public; PTC also paid off the remaining debt on top of that, perhaps as much as a further $169 million. The $470 million was just the net purchase price.

Onshape boosts PTC's efforts in boosting recurring revenue, sweet talk for more subscriptions from more customers. As Mr Hepplemann explains, SaaS [software as a service] "is a long-term monetization effort that’s significant, because while we’ve brought our customers from perpetual to subscription, there’s another and potentially bigger monetization associated with bringing them from on-prem [software running on customers premises] into SaaS [software instead running on servers rented by PTC]." 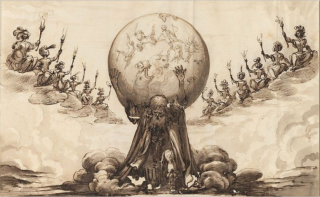 Onshape boosts PTC efforts to do more SaaS. The technology on which Onshape runs becomes the technology on which PTC's other software will run. PTC has named this technology "Atlas," the Greek's mythical god whose punishment was to shoulder the entire firmament for eternity. He was one unhappy camper. (Image source allposters.com.)

"We’re proceeding full speed ahead on the Atlas program, which aims to generalize the underlying Onshape SaaS architecture and put it to work more broadly across the entire PTC product portfolio," explained Mr Hepplemann.

PTC says its Vuforia AR software already runs on Atlas; no surprise, as that was an easy port. As does Onshape, of course.

Creo of the Clouds

Mr Hepplemann calls Atlas "a breakthrough CAD platform that will allow Creo [MCAD] and Windchill [PLM] to get into that SaaS world years earlier than they would have independently, and on a consistent platform. Everything’s knitted together on a common platform. But you know, I want to be clear: it’s not a short-term strategy."

The interesting claim that PTC plans to port Creo to Atlas is interesting because it is pretty much now a given, in 2020, that CAD belongs on the desktop. Nevertheless, Mr Hepplemann is giving his company several years to pull cloudCreo out of the hat.

Don't expect it this year or next or the next. "Let me be clear," repeated Mr Hepplemann. "It’s kind of a mid- to long-term thing, because we’re really looking at doing kind of a major redevelopment of those properties onto this platform."

Here is what he is promising customers: "The key thing for us would be to optimize [cloudCreo] for compatibility and continuity" with desktop Creo. Also:

The question then becomes, How does MCAD package Creo compete with MCAD package Onshape, when there is no differentiation with both running on the cloud? From earlier comments by PTC, it appears that Onshape will always have fewer capabilities than Creo, be cheaper than Creo, and be targeted at smaller firms than Creo. The little step-brother.

Mr Hepplemann employs a Google-Microsoft analogy, in which Onshape is Google Docs and Creo is Microsoft Office:

I have an analogy I’ve shared internally many times. If you think of Google Docs, it’s a completely fresh thought, fresh look at an office productivity suite. Meanwhile, you had Microsoft Office, which was on-prem [desktop].

But Microsoft came out with Office 365, which was SaaS, [because] companies like PTC might have been thinking about whether we should go to Google Docs. Many do, and particularly new companies, but companies who have been using Office forever really do prioritize compatibility of data and user experience, but we like to [also] have SaaS.

So you could imagine we could build a product that looks a lot like Creo. But it runs in the cloud and is multi-tenant, but you open up your same old files and you go right back to work with the same old user interface, much like you did with Office 365.

Meanwhile, Onshape over here is more like Google Docs, unbridled, unconstrained innovation, no legacy, trying to invent the next generation of application. So I think Onshape fights the fight against competitors, and Atlas allows Creo and Windchill to bring their customer base [to the cloud].

Onshape is not compatible with Creo, although Atlas is supposed to make sure of that. So, I wonder if Onshape has a future at PTC? In my version of alternative history, once PTC gets Creo to a 'good enough' level on the cloud, the lower-revenue-producing Onshape might be, I wonder, seen as a drain on sales and marketing resources, and so dumped from the line-up.

[Quotations with some editing for clarity and brevity sourced from https://seekingalpha.com/article/4362125-ptc-inc-ptc-ceo-jim-heppelmann-on-q3-2020-results-earnings-call-transcript]

Posted at 08:57 AM in Computer-aided Design: NEWS | Permalink