Last week's list of Revit complaints by an international group of architectural firms reads much the same as ones listed already back in 2014. As reported by Iain Godwin of Godwin Consulting, "In 2014, a group of 12 large Australian and New Zealand Practices sent a letter to Autodesk’s Sales Director, Autodesk Asia Pacific, stating,"

We feel that the value for the money that we have been spending on the software subscriptions has been diminishing steadily, most noticeably in the last 2 or 3 years.

We also feel that the annual enhancements to the software are not being sufficiently driven by existing user requirements.

It appears that marketing driven changes are much more dominant.

According to Mr Godwin, "The net response from Autodesk was, no letter, no email, no phone call. Nothing."

Tim Waldock, Revit consultant at RevitCat in Sydney, Australia writes on Linked-In (linkedin.com/pulse/autodesk-letter-tim-waldock/) regarding the "Rage against Revit" open letter to CEO AndreW Anagnost, noting Autodesk's lack of action in 2014, and then goes on to list the good and the bad changes to Revit since 2014. He concludes:

It will be interesting to see how Autodesk actually substantiate their claim: "Engaging, listening to and addressing the concerns of our customers is a top priority for Autodesk."

The Linked-In post includes the 2014 letter in its entirety. 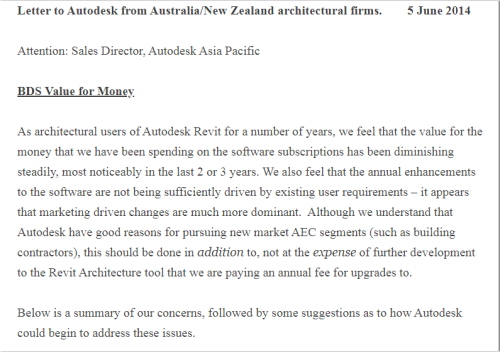 Posted at 01:17 AM in Computer-aided Design: NEWS | Permalink