Summer used to be quiet time for user conferences, press events, and product launches. People were, after all, on vacation. Fall was the busiest time for me, but spring was busy for others who cover tech events. Then a thing called coronavirus happened, and people said that "afterwards everything would change."

For these events, it has changed. Last week and this week, I received invitations for five online events -- from Graphisoft (2 events), 3D Systems, Siemens, and Lenovo. In July! That I am travelling and on vacation during summer months -- well, that's not a factor. I have to miss three of them, precisely because I am travelling (annual visit to mother-in-law), but some events have replay enabled, fortunately.

One live event I am missing is Lenovo's launch of what it calls the world's first workstation with  64 cores, thanks to AMD's new Ryzen Threadripper PRO CPU. For me this is a "finally" moment, as AMD of late has been blowing Intel out of the water. AMD always was a CPU maker and I seem to recall some law suit that forced Intel to share 8086 code with AMD so that its CPUs are compatible with Windows, et al. I've watched Intel since the late 1980s and have been amazed at its ability to stumble, most recently its inability to get its CPU size down to 10 manometers; competitors like AMD and Samsung are already down to 7 and 5nm.

Update 1: Here are the specs for the three Ryzen CPU models announced this week (image source The Register): 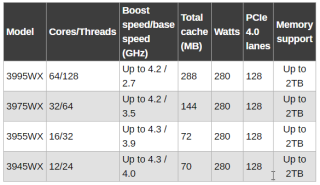 So, yah, AMD is blowing Intel out of the water, according to what the tech publications say, in both advances and pricing. Lenovo is pleased to ride the wave by being the first to offer this new ThinkStation P620 workstation with an AMD CPU that offers: 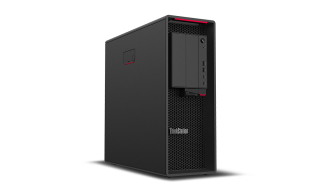 Outside of the new workstation (image source Lenovo)

In addition, Lenovo stuffs the box with 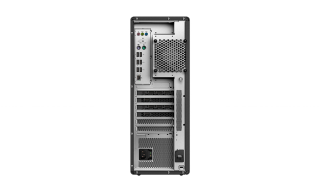 Back of new workstation

So, this is the most cores ever offered in a workstation, according to Lenovo. This kind of a computer is meant for software that actually makes use of many cores, such as rendering and FEA [finite element analysis]. In addition, the software has to support 64 cores, as some are written for fewer. It is not too useful for CAD drawing and editing, which is strictly single-core work. Some CAD systems use more more than one core for a very few, very specific tasks, like loading drawing files and regeneration (which is reloading drawing files). 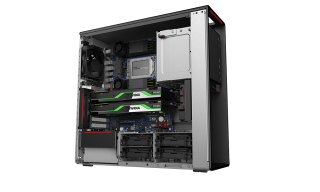 Inside of new workstation

This new computer ships in September, with a price that is unknown to me today. The liberal use of the words "up to" means that the base price will be reasonable (for a workstation), and then skyrockets. More info from http://www.lenovo.com/p620

Posted at 09:30 AM in Computer-aided Design: NEWS, Hardware | Permalink