« The Determinism Future of AI | Main | To Our Detriment, A.I. Locks Up Knowledge »

On Who Would Buy OnShape

Who would be interested in buying OnShape? Well, it needn't be a CAD vendor; it could be an Oracle or a SAP (both of who have long offered PLM) looking for a cloud-based CAD file editor. Both already have CAD viewers.

Or it could be a peripheral CAD vendor, like Hexagon or Trimble. Hexagon is keen on the cloud for its new line of Smart bundles, but doesn't have a cloud-based MCAD offering; on the other hand, it already owns nearly a dozen CAD packages. Trimble doesn't have an industrial strength (M)CAD system but is more into AEC.

Most traditional CAD vendors wouldn't be interested in OnShape, because they either already have such a product (Autodesk with Fusion, Dassault with V6) or else they can't afford the $169-million price tag. Two firms that don't already have cloud-based CAD and have the money are PTC and Siemens PLM -- which makes them possibilities. Of the two, I'd put my money on PTC.

But technology is not the only rationale a CEO makes to his board for an acquisition. Other reasons include:

Here's a thought out of left field: a consortium of smaller players buys OnShape and then adds tech to it as the basis of a universal CAD system. Here I'm thinking of IntelliCAD Technical Consortium getting together with Open Design Alliance to make the acquisition. The ODA already works closely with OnShape, and ITC has a CAD development-testing-distribution system in place.

So, why would OnShape even want to sell itself. Here's my opinion: 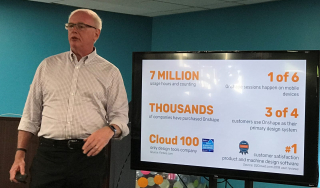 It's really pretty simple... CAD on the Cloud is for Marketing types, not Engineers/Designers doing the real work.

Ask the Credit Card company Capitol One how their 110 million customers data was stolen... "Who's in your Cloud"?

Anyone doing non important stuff can afford to loose meaningless CAD data and IP to hackers. Anyone who is serious about their work keeps it out of harms way.

OnShape is the biggest secret to CAD users. Yeah I tried it, didn't like it. The Tabs at the bottom of the screen don't work for me. The confusing Merging feature makes things more complicated for me. The most surprising thing for me is the arrogant attitude of the upper management. I had a crazy run in with an OnShape employee, and their response to the situation was just as crazy. A 180 degree turn about from the good old SOLIDWORKS days when all was good. Oh well. Back to work using Fusion 360.
Cheers,
Devon Sowell