« The Snake in the Garden | Main | The Determinism Future of AI »

I Bought a $275 Lossless Music Player, then Returned It

I've looked for years for a huge capacity music player, one that could hold my entire music collection, which is about 122GB. I got a 64GB iTouch (which one of my daughters took over), and then a 120GB iPod, but Apple's big, big failing is it doesn't allow playback by folders. I suspect the failing is due to how it sets up its protection system.

(So create playlists, Apple-hugging friends tell me. Why, I ask, when I already have all my music sorted into folders. No need to take the extra step of creating dozens of playlists.)

My fav music player brand is Sony, especially after I bough a high-end player in Tokyo some years back with built-in electronic noise reduction and fab sound through its Apple-shaming headphones. But it holds only 16GB. None of Sony's reasonably-priced players go beyond 16GB; I think they reuse their OS and chips from long ago in all their non-expensive players, limiting them to 16GB or less. For big capacities, you're into their high-end line that costs $1,000. 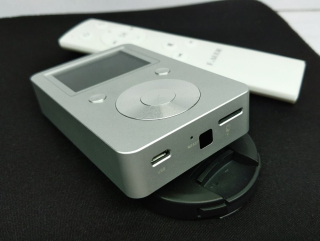 So I perused eBay's collection of lossless music players that are around $200-$300. I was looking for something to reward myself for the hard work I put in each Winter in my business. I settled on one that was elsewhere reviewed positively as "smaller than I expected, heavier than I expected" -- the F.AUDIO FA1 lossless music player. (Image source player.ru.) I liked the sound of that. I wanted small and hefty.

It handled lossless file formats, as well as the usual compressed ones like MP3, came with 32GB RAM but accepted up to 256GB in a microSD card. It was $275 but one site had it on sale for $210, with free shipping that took nearly three months to arrive. While waiting, I bought the 256GB memory card.

When it arrived, I found it was bigger than I expected and lighter than I expected. Solid aluminum case but plastic back. It came with a USB cord and a remote controller. No headphones, no instructions, and a Chinese interface. After being spoiled by touch screens, it was hard for me to use the click-wheel to navigate. I perused the settings until I finally could click the English interface language.

I loaded up my 122GB of music on the 256GB card, and settled in to enjoy the sound. Ugh. Constant hissing noise. Otherwise, the sound was good, and I am picky about sound. But then a bigger problem incurred. I actually timed it: it took the unit nine seconds to start a song. I don't know what it is doing during those nine seconds, but that long a wait is intolerable. I wonder if the software and/or CPU are too weak to handle processing my 18,592 files.

Then a light came on.

I have a few spare smartphones laying around, and so I wondered if any of them would take the 256GB memory card AND could handle 122GB of music files. (Some phones are limited to 128GB and many take no microSD card at all.) One did. Coupled with Neutron's idiosyncratic (see figure below) but fab music player (http://www.neutronmp.com/), the sound is wonderful. There is no hiss, it has the touch interface ('natch), and songs start immediately.

After a couple of weeks, I decided to return the F.AUDIO lossless music player. It was bigger than I wanted, had a clunky interface, hissed, and was slow. That's not worth $210 to me. The vendor accepted the return, but would not pay for return postage. Fortunately, the same week, PayPal instituted the new policy of refunding up to $30 towards return postage.

My cost in the end: $40 for the memory card. The phone, I had got free, due to circumstances. Its 2GHz CPU handles the 18,000 files effortlessly, and Neutron makes the music a pleasure to my ears.