« CIMdata on PLM Status & Trends | Main | The Snake in the Garden »

The First Exciting New Phone in Years, from ASUS

I have the three-year-old Zenfone 3 Zoom with its 2.3x optical zoom and amazing 5000mAHr battery that lasts 2-3 days, but I am thinking of a 10x zoom phone next. I already have the old Samsung K Zoom, with its 10x optical zoom, but its primary flaw is that the power button is so sensititve that I often find the battery dead. (I use it to snap photos at conferences and transfer them quickly to my laptop through Dropbox.)

Nevertheless, I was interested to see what ASUS plans for this year's phone, the Zenfone 6. See asus.com/Phone/ZenFone-6-ZS630KL for the official site.

Be aware, however, that ASUS released a ZenFone 6 in 2014, model Z600CG. The new ZenFone 6 is model ZS630KL. If you go searching for 'zenfone 6' on the Internet, you might arrive at the wrong one.

I find that GSM Arena does the best job of summarizing specs for phones, and so you can read their list at gsmarena.com/asus_zenfone_6_zs630kl-9698.php.

The Zenfone 6 gets back the 5000mAHr battery I have in my Zenfone 3. While ASUS says it's good for running for two days, I love it for a different reason: at the end of the day, the battery is down 1/2 or 2/3s at most. This means I never have to worry about recharging it in the late afternoon or evening. And when I am in a situation where it's not easy to recharge the phone, such as while flying, then I don't need to panic. 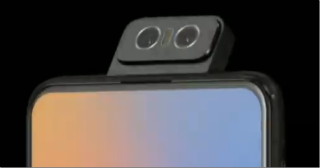 Camera unit rotating around to the front

The highlight is the camera system: a motorized two-camera unit that rotates to the front to become the selfie camera. One camera has a 48-megapixel lens, the other a 125-degree wide-angle lens, which is equivalent to a 9mm lens on a standard 35mm DSLR. (See bobatkins.com/photography/technical/field_of_view.html for more about wide angle lenses.)

The motor takes about 1 second to rotate the 180 degrees, back to front. Now, I don't care about selfies, so this speed doesn't matter to me. Instead, what I find exciting is that ASUS thought about all that a rotating lens could do for us:

ASUS says the 48-megapixel lens will allow cropped zooms to simulate optical zooms. I'll be interested to read about the Oppo phone due this summer with an actual 10x optical internal zoom. As well, the 48-megapixel sensor is already obsolete, as Samsung has announced a 64-megapixel one that is due to ship this fall.

The camera also takes 4K-resolution videos at up to 60fps [frames per second] with electronic image stabilization.

Price starts at US$499 and euro 499. You can watch the launch event at www.youtube.com/watch?v=VBk8c1oHUcA

Posted at 01:13 AM in Android & iOS, Digital Photography | Permalink

I've been thinking about getting a new phone but couldn't decide which one. After reading your review, I might be getting an ASUS. I wonder if we can also expect a review for OPPO.