Google Music is a disaster

I had been using iTunes for many years, as it is the only good way in Canada to purchase music. There were other services, but some of them have gone under. Amazon.ca doesn't let us download tracks or albums, and eMusic.com has a limited selection.

Further bonuses for Apple's service are that Apple made its AAC proprietary music format open, so just about any music player handles it; no need to convert to MP3 format. Also, hidden in iTunes is the ability to burn albums to CDs. Also, BestBuy  sells four-packs of $15 iTunes gift cards with a permanent 15% discount.

But the iTunes software is a lumbering dinosaur, and I don't like multi-billionaire Apple pocketing 30% of the artist's revenues for itself. Five or 10% would be reasonable.

So I searched for other solutions. Some artists, I found, let you download their music from their site, but this too is limited.

The only other solution in Canada seems to be Google Play, so I gave it a try. What a disaster. 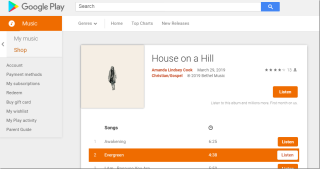 To buy from Google Music, I had to enable Google Music on my phone. I find its user interface odious, and far prefer the superior sound quality of Neutron Music Player (www.neutronmp.com).

The only straight-froward part of the process was buying the album (Amanda Lindsey Cook's House on a Hill), as Google accepts PayPal for payment, but after that it went nuts.

House on a Hill track listing

Neutron Player could not find the newly downloaded tracks, so I went looking for them. No dice. I looked online, and found that Google hides the tracks in a hidden folder that is accessible only on rooted phones.

I've rooted my phones before, but found no great advantage, so I don't do that anymore. I kept looking (using Bing) to see if there were other workarounds.

It turns out that the tracks are visible if you save them on a device with a memory card. So I enabled Google Music on my tablet, directed it under Settings to save tracks on external memory (microSD card), and downloaded the tracks again.

This time the folder (Android/data/com.google.android.music/cache/music, obviously) and the tracks were visible but they were anonymized with names like 33.mp3. While the numbers are sequential, they do not match the song order on the album. (Google Music displays the correct names in its UI.) 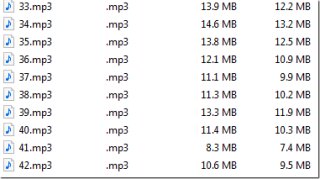 What Google thinks the track names ought to be

So I spent time renaming the 10 files. Now finally I could put the album on other music players and/or burn it to a CD. The entire process took about a half-hour. So, never again.

I plan my future tactic as: Attempt to purchase the album direct from the musician, then resort to iTunes otherwise.

At least Google doesn't use a proprietary file format for the music it sells, although I suppose streaming is a kind of locked proprietary format.

You can download the mp3 from the Google Music site fairly easy. You can click the 3 dots on the album you bought and select download. It will ask for a folder and put them there with them already named and the meta data tags populated.