« In our brave new world, our cell phone number is the new SIN | Main | Facebook Asks Government to Protect It »

Alright, here we are, waiting for the conference to start. A bit of background while we are waiting. This the first Bricsys event officially promoted by BricsCAD, and so is the inaugural one.

The agenda is to introduce BricsCAD to executives looking for an alternative to AutoCAD, as well as highlight the add-ons with which it works. The biggie is CADWorx, of course, the full-fledged plant design and analysis program -- primarily oil and gas facilities -- but also inside buildings (known as pharmaceuticals). Hexagon has already announced that the next release of CADWorx will include BricsCAD Platinum free, so that'll drop some of the AutoCAD license numbers.

We are getting the welcome from Damien Harkin, the BricsCAD dealer in this part of Australia, and a bit of history. BricsCAD is short for "building-related interactive computer systems), and the first software was called BricsWork running on an BIM RISC workstation (1990), then ported to working with MicrosStation on PCs., which lead to TriForma 3D solid modeler, which Bentley Systems purchased.

Brics|Net Architecturals in 1998 ran on AutoCAD and IntelliCAD was a 2.5D modeler, but then the dot.com bubble crashed things. (Brics.net had gone public earlier.)

So then came the new plan became BricsCAD IntelliCAD (2002) but then in 2010 left ITC with 100% new code -- code-named DDCAD, named after DwgDirect libraries from the Open Design Alliance.

The base of BricsCAD is the ODA Drawings SDL. WxWidgets is the GUI so that it works the same on Linux, MacOS, and Windows. Next comes the ACIS solid modeler, followed by LEDAS geometric, parameters, and solver. On top of this are the APIs, with wrappers to make TRX the same as ARX -- all 26,000 calls. 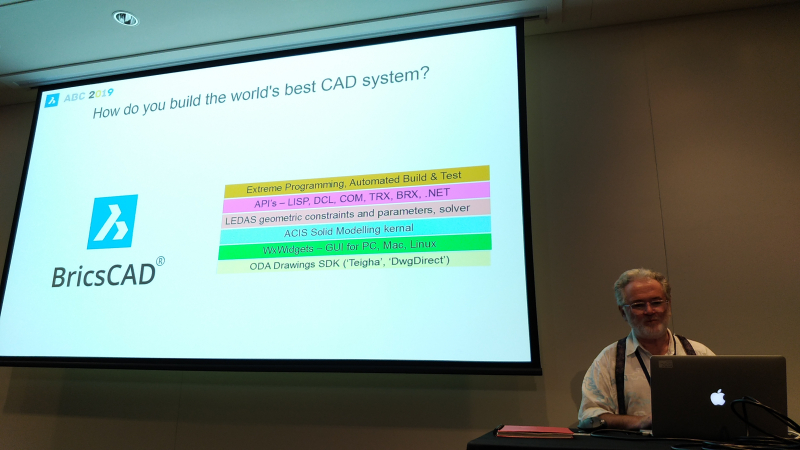 Bricsys uses extreme programming, where two programmers work on the same code. Write the tests first, then write the code.

Jason Bourhill is a BricsCAD dealer and programmer in New Zealand with a background in mechanical engineering. He's talking to us about the pain from (unnamed Autodesk) CAD system with high cost, little development, restrictive licensing (only subscription licenses that phone home every 30 days, and licenses prevent you from using the software outside the country of purchase), running old software if you don't want to for forced on subscriptions, and so on. 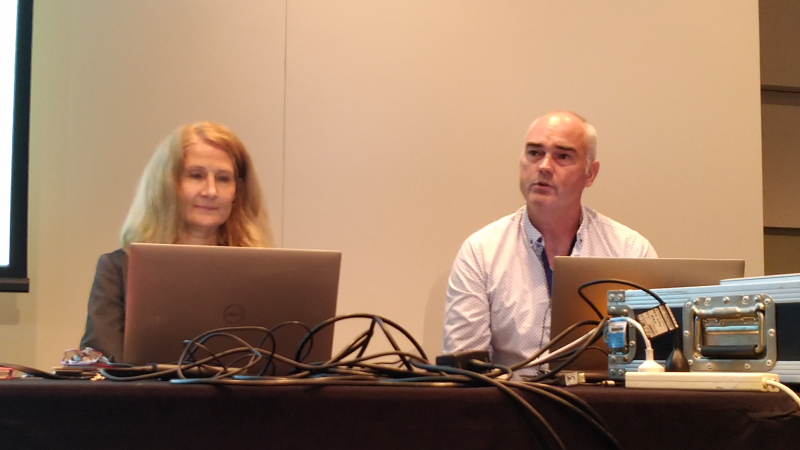 BricsCAD is kind of the anti-Aut0CAD, where licenses are permanent, and you can even use old versions of BricsCAD in case that is needed for third-party applications. The cost is lower, and third-party apps and your customizations migrate over. And it gets a ton (tonne) of new features every few months.

Whereas Autodesk's BIM and mechanical software is not particularly compatible with AutoCAD, BricsCAD uses the DWG format for the base program and its BIM and mechanical extensions. Jason has created a spreadsheet into which you can plug in your own numbers to determine the savings. With one user, the payback period is 0.46 years and the ROI (return on investment) is 400% over five years, and a savings of $10,000 per seat.

What to do with the savings: buy more seats, new hardware, training, pay for customization, get third-party applications, and/or throw a party.

Heidi Hewett formerly with Autodesk is now with BricsCAD as user success manager. As the case history, we are going to hear about KCL Engineering, who specializes in making buildings safe against earthquakes. They use Revit, Tekla, and AutoCAD. But engineers use a PDF editor to mark up drawings, but needed something more. Instead of AutoCAD LT (due to inability to customize), they went with BricsCAD.

Here is the aspects they looked at to do the migrations from AutoCAD to BricsCAD: 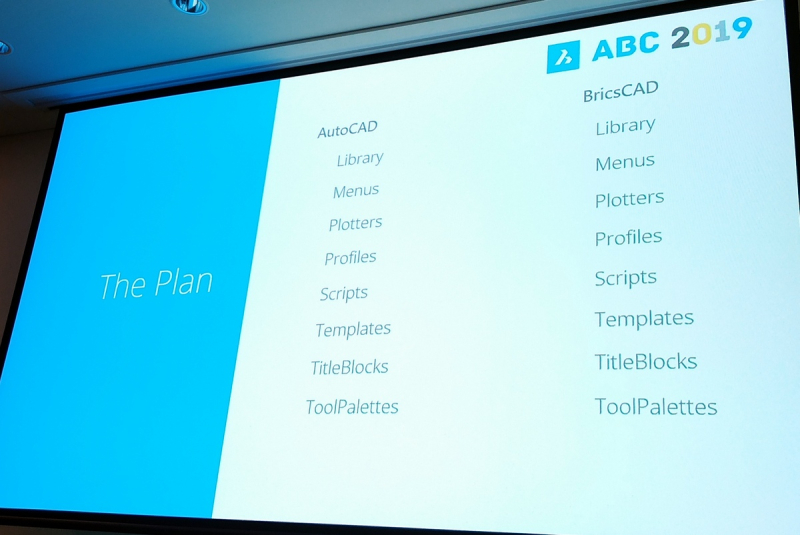 And here is what happened: 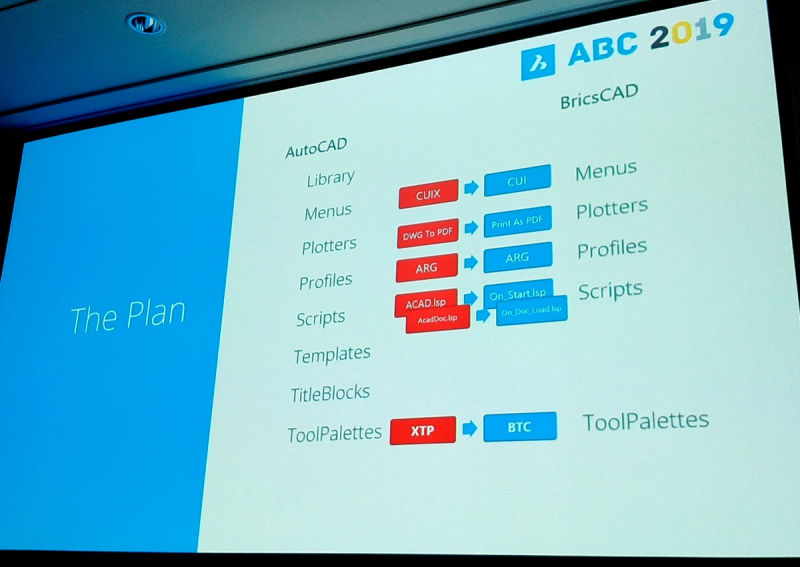 While much of AutoCAD and BricsCAD is the same, there are improvements in how BricsCAD handles things:

We've finished our morning tea break, and hearing from Damien about how the new style of MCAD software is better than the old-style that needs a history to understand the 3D model -- still used by Pro/Engineer, Solidworks, and Inventor. It gets worse when trying to move a model from one system to another, in that all intelligence is lost. 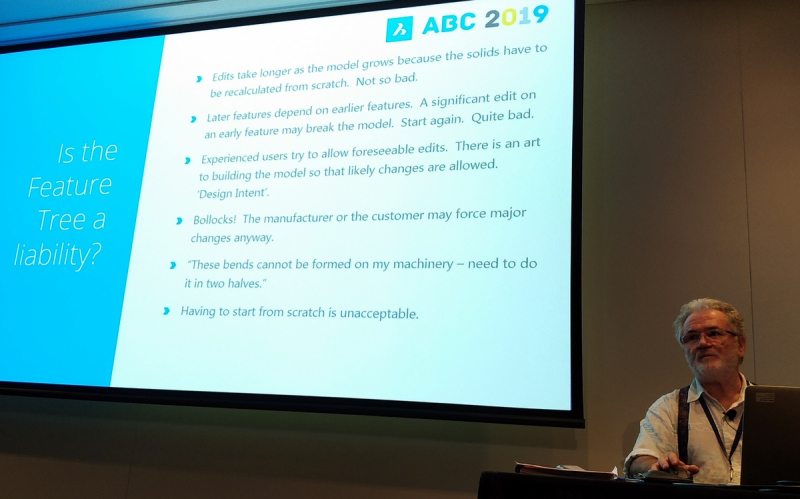 New MCAD systems, like BricsCAD Platinum and Onshape, don't use a history tree, and so an add intelligence to imported models using the variational solver. 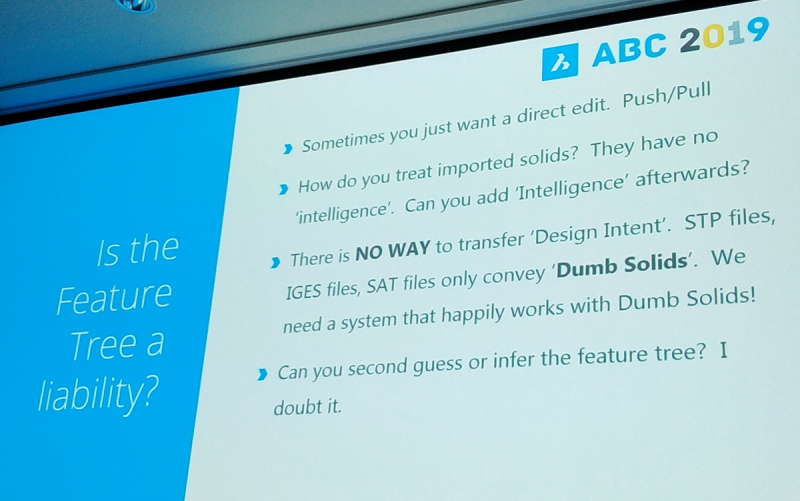 One of the hidden features in BricsCAD Platinum is the animate function that moves a constraint through a range of values, so that you can see how changing the radius of a cylinder head or an angle changes things.

Platinum is a bit of an unfortunate name, as it used to refer to the fullest-feature version of BricsCAD. But with V19 (released last fall) Platinum is the version that has all the MCAD functions, such as 3D parameters, and is necessary for the add-ons, such BIM and Mechanical. (The BIM add-on uses 3D solid modeling.)

Tip: Enter the inspector function to get a dialog box that lists the DXF data, COM properties, and LISP details of the selected entity. The Show Modification option alerts you when an entity is changed, and then shows the changes.

We're ending the day with Michael Smith from Hexagon, the new parent of Bricsys. Intergraph is now 50 years old, albeit under the name of Hexagon PPM. "Little did I know as a small boy enchanted by the [NASA] rocket program, that one day I would be working for a company involved in it [guidance software]." They figured out how to send the telemetry (the rocket's position) data to screens in realtime -- instead of plotting on paper.

Intergraph introduced its first plant design software in 1978, and so is mostly known for this software. Their first 3D software was InterAct and InterPro in 1983. Even though Intergraph retired PDS (Plant Design System) 10 years ago, many firms continue to use it today -- but the software today is database-based and is known as SmartPlant 3D for mega projects ($20 billion). Most projects, however, are between $5 million and $20 million, so Intergraph acquired CADworx from Coade, which ran on AutoCAD and now on BricsCAD.  Simulate the plant before constructing. 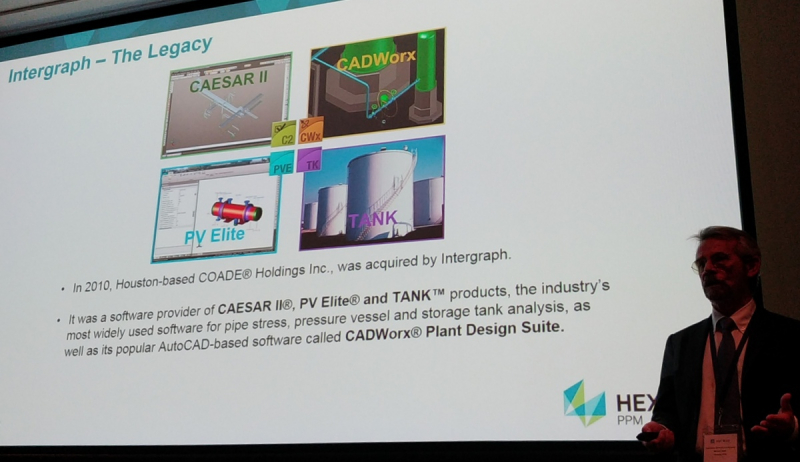 What was exciting for Hexagon is that there was a better platform out there than AutoCAD. Twenty products were evaluated, and then it turned out -- "undeniable" -- that Bricsys would be the choice.

Output (point clouds) from Leica laser scanning can be opened in BricsCAD, and then processed by CADworx.

The next generation of DWG is AI (artificial intelligence) and ML (machine learning), says Mr Smith. "We see Bricsys as the innovator of DWG products," especially in BIM. Bricsys has its own head of R&D and AI. But AI must be reliable.

Growth of Hexagon is driven by population growth, whether desalination plants or semi-conductor manufacturing. "Using all-in-one DWG to get our work done, instead of a mishmash of products. We don't leave the DWG workflow."

Hexagon thinks subscriptions are bad business, because it alienates customers; it's only there to satisfy shareholders in the short term. Hexagon offers subscriptions, but considers permanent licenses the way to go.

"You can rest assured we [Hexagon] are backing Bricsys all the way."

(Disclaimer: ABC provided me with airfare and some nights hotel)

Posted at 11:42 PM in Travelogues | Permalink

And a special mention goes out to you Ralph with your presentation (sans Powerpoint slides). This was one of the highlights from the day for myself and those I spoke to during the breaks. Thank you for sharing your time with us.