After Apple taught manufacturers in China how to design and build smart watches, the market over there became flooded with sub-$100 models. During Black Friday weekend, Umidigi offered their new smartwatch for US$30, instead of US$50 -- with choice of rubber or metal mesh strap. Apple charges $100 for its metal strap alone, so this was a deal!

I wanted to see what the very latest in smartwatch could offer me, albeit cheap. This would not be my first, but my fourth. My first was Sony's original one came out in 2012 and barely worked. A couple years later, and Autodesk handed out Nike's version to the media as their thank-you gift for coming to Autodesk University.

The Nike recorded steps and calories burnt. The rubberized band irritated my wrist. But worse,it became useless, after I determined I burned 100 calories an hour and walked 6,000 - 8,000 steps a day. It gave me the same report every day. And then Nike cut support for it.

So I blew the 30 bucks on a color model that was brand new. Could a smartwatch finally prove useful?

It took two months to arrive. I suspect it had not yet been manufactured when I ordered it. But at least it arrived. 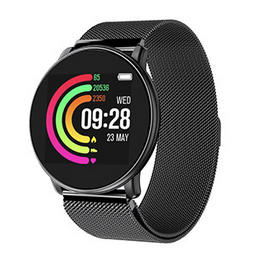 I don't like big watches, and so I was pleased the Umidigi was not much bigger than my Citizen Eco-Drive watch I've worn for 19 years now. The tiny Umidigi instruction booklet was written in legible English, but still puzzled me.

After touching here and there, I realized it had one touch-sensitive spot (at the bottom of the face) and supported two touch motions:

It measures steps, calories burned, activities (not sure that that means), and sleep time. It had the traditional green laser underneath for measuring heart rate -- which I found to be accurate. It can read messages from the phone, control the phone's media player, and the camera's shutter. It communicates with the phone through Bluetooth.

There is a separate app to download to my Android phone, which I downloaded, got frightened at all the permissions it wanted, and uninstalled it.

It comes with only three awful gaudy digital faces, no analog ones, because while the watch might be round, the display is square. The only customization it offers is to select a photo from my phone as the wallpaper on the watch.

Remarkably, the watch's battery lasts a week or longer. One reason is that it has just one radio (Bluetooth), where as one-day watches like those from Apple have lots of radios that burn through the power, like GPS, cell phone, WiFi, and Bluetooth.

There is one more reason why the battery lasts so long. It's hard to turn on the display, so it's off most of the time, even when I want it on.

Speaking of battery, attaching the charging cable is a challenge. Like with other watches, the cable attaches with a magnet. But the charging port is next to where the strap attaches, a tight location. So it invariably snaps to the metal strap, instead of the watch's body.

Anyhow, this brand-new, hot off the assembly line watch told me what that Nike strap told me years ago: I burn 100 calories an hour and I walk 6000-8000 steps a day -- not that useful, so after a week I took it off, and added it to my collection of watches.