Archive: What I tweeted about Bricsys 2018 London

Theme music for the London conference of Bricsys 2018 is "London Calling" by The Clash. "Who's that?" asks the young-ish 61-year-old CAD journalist sitting next to me. "I bought the [double] album when it first came out," I replied, smugly.

Learning about the future plans of Bricsys at BRICSYS 2018. It involves practical jobs performed by the CAD system on behalf of the human designers. Computer are best at repetitive, boring work; humans best at the creative side. Bricsys sees one assisting the other.

Bricsys sees the problem with Autodesk's dynamic blocks are being too manual, and so too difficult, and limited to 2D. BricsCAD V20 will instead have a 3D version that generates flexible blocks semi-automatically. Even add BIM data automatically using BIM styles.

Future versions of Blockify will do more than just finding simple entities. Future versions will handle assemblies and imports of tessellated data and point clouds -- replacing them with more appropriate entities.

Other things Bricsys is planning for future releases of BricsCAD:

By being acquired by Hexagon of Sweden (which has a major presence in Huntsville Alabama through Intergraph), it makes it easier for Bricsys to take on the American market. If you are asking who is bigger, Autodesk has about $2.5 billion in sales while Hexagon/Intergraph/Bricsys is at about $3.5 billion in sales.

So, this is Hexagon's Trimble moment, when Trimble bought SketchUp from Google to get further into AEC, except that SketchUp isn't useful for real 3D modeling. Official reason given by Hexagon on acquiring Bricsys:

The big sales pitch is that you don't need to leave DWG or translate to/from DWG. "The flow stays in one format as you move from application to application -- at a fraction of the price. We will win one customer at a time," says Hexagon exec vp.

After Autodesk canceled his ADN agreement (he was the 2nd oldest ADN member) with no reason, Hexagon PPM exec vp Rick Allen got nervous about the future of CADWorx. Now, he says, Autodesk should be nervous, because he feels Revit penetration is not very deep, users dissatisfied.

The acquisition is closed, which means it is final. Here is a picture of Erik de Keyser’s new boss, Hexagon executive vp Rick Allen. 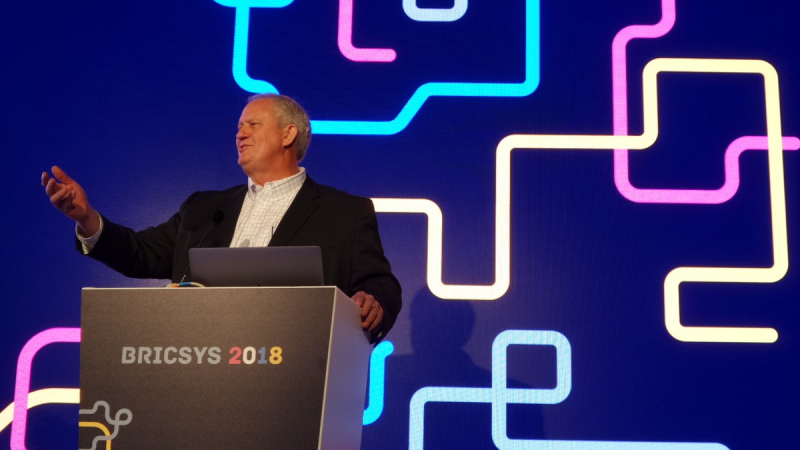 (Hexagon PPM is short for "plant power marine," which is what Intergraph became specialized at. "Became" because the company got its start as M&S Computing doing work on the Apollo moon shot of 1969. Which is why the Intergraph [Hexagon PPM] head office is in Huntsville, AL, the home to NASA's Marshall Space Flight Center.)

Future of BIM in BricsCAD V19

Bricsys estimates the BIM penetration is only 16%, split between Revit, Vectorworks, GRAPHISOFT, and others. This, ceo de Keyser feels, gives Bricsys and Hexagon a big chance. He hopes 20-25% market share in a few years time.

The aim, says Bricsys ceo Erik de Keyser, is to virtualize the to-be-built structure eventually to LOD [level of detail] 450 in 3D. BricsCAD V19 imports RFA (Revit family files, which are parametric blocks). When the RFA lacks parameters, then BricsCAD can add them with a single click inside the new Block Editor environment. 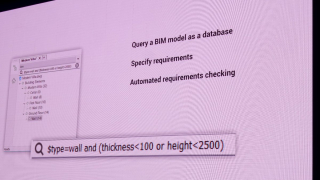 Site modeling with new commands in BricsCAD BIM V19: import TIN and then cut/fill the site to match the building's needs. 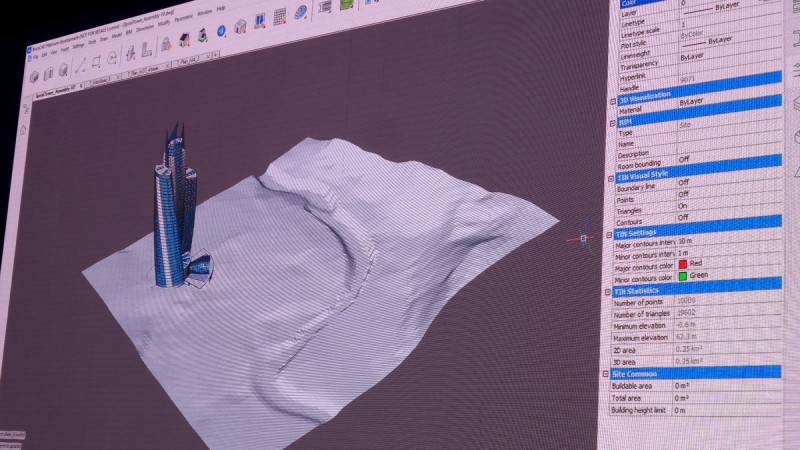 Here's the new UI for the BIM module of BricsCAD V19: 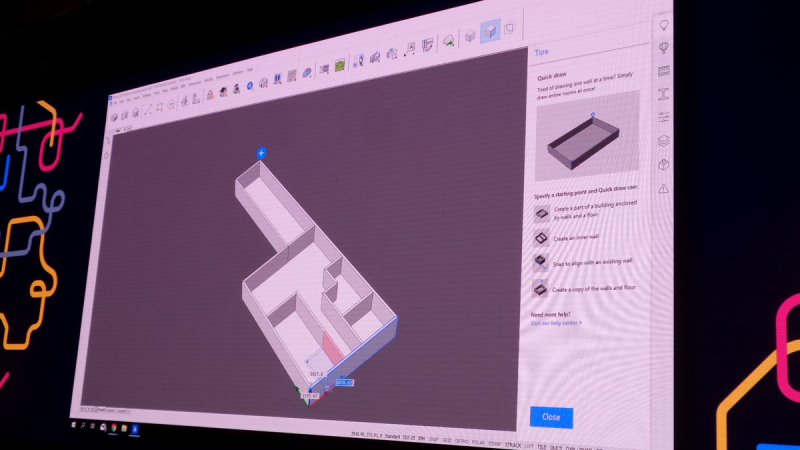 Future of Mech in BricsCAD V19

The new Animate option in the Parametric panel animates parametrics: BricsCAD briefly moves the entities related to the parameter, such as a shaft moving inside a cylinder.

Applause at BRICSYS 2018 for the real-time exploded view in BricsCAD V19. Dragging the cursor back and forth pulls the assembly apart and together. 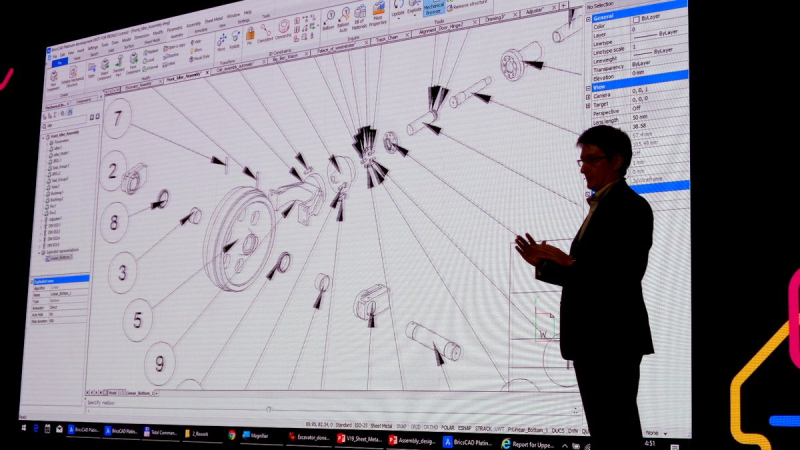 New in sheet metal: Associative unfolding and curved junctions. Creating sheet metal parts from scratch right in the assembly view of BricsCAD V19. BricsCAD also displays both the original sheet metal and the unfolded version in the same window. One sheet metal design took three minutes, partly thanks to the semi-automation BricsCAD provides the designer. It can also design in conjunction with imported models, such as from STEP and Solidworks. Also seeing how sheet metal is created automatically from imported solids, such as corner reliefs -- and then unfold. "It takes two seconds!... Maybe 3."

New in BricsCAD V19 is a parametric hole library, with drag and drop insertion into parts. A future release will allow holes in blocks and assemblies. All this is done with DWG. Also new with assemblies in BricsCAD V19: arrays of parametric components and automatic exploded views. 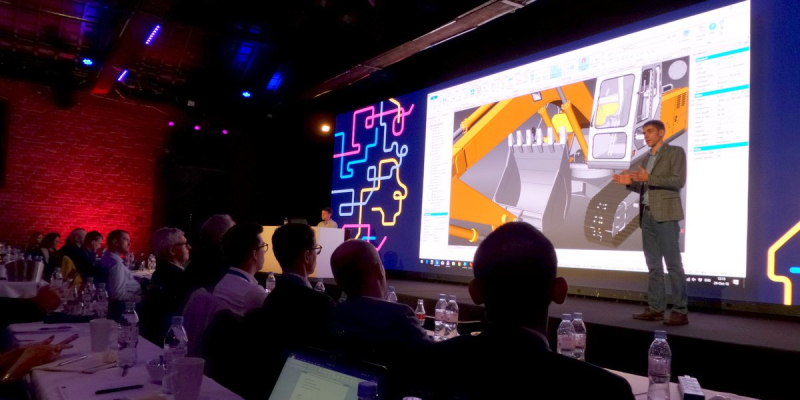 All this is the new BricsCAD Mechanical, the new name for the old Sheet Metal add-on.

Steve Johnson lead the initial BricsCAD User Group in London, at which it was agreed that the group should be formed.

If you have a bad DWG, the BLADE LISP editor from Bricsys lets you examine it.

Posted at 01:05 AM in Travelogues | Permalink

There is no well-rounded software package for shipbuilding. There are Cadmatic, Aveva, Ship Constructor,... But I don't know anybody who is really satisfied with that solutions. Many shipyards still work in AutoCAD 2d... Maybe Hexagon will recognize that market and develop something better. New module BricsCAD Marine :-)

As a famous Star Wars slogan goes: "I gotta bad feeling about this". Already my cost to upgrade to V19 Mech is almost twice what I paid for the V18 Platinum + Sheet Metal upgrade last year. Tell me how this is any better than 3D Systems swallowing up Alibre some years back? Might be overreacting, we'll see. Bricscad user since V5.

Then a few years later, 3D Systems spun Alibre off through a management buy-out.