Archive: My tweets from the Berlin 2019 Graebert Annual Meeting

Getting ready for the Berlin Graebert Annual Meeting here in the Humbolt Box, a temporary structure in former East Berlin overlooking the reconstruction of the Berliner Palast (Berlin Palace) torn down by communists. The view outside the Humbolt Box reminds us we are in former East Berlin, with the modern tv tower next to centuries-old buildings -- and construction cranes as Berlin continues to rebuild itself. 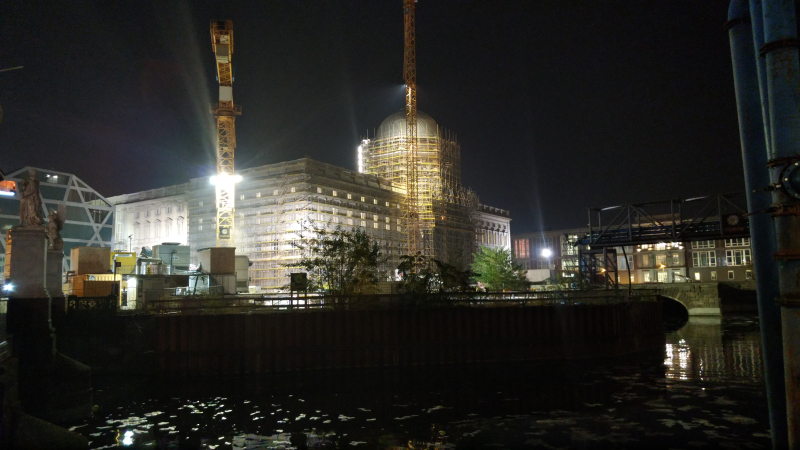 The Berliner Palast at night

At #Graebert18 we'll be hearing about what's new in ARES, Touch, Kudo, Dassault Systemes DraftSight, Corel Software CorelCAD, Onshape, and third-party add-ons. As a reminder Graebert is the CAD vendor with:

The opening keynote from Graebert ceo Wilfried Graebert gives us the history of this area of Berlin. The Palace was where the Prussian empire was centered. He notes that Graebert Gmbh has 160 employees, with 85 in R&D. Business is strong in Japan, so Graebert Japan Ltd. was created this year. 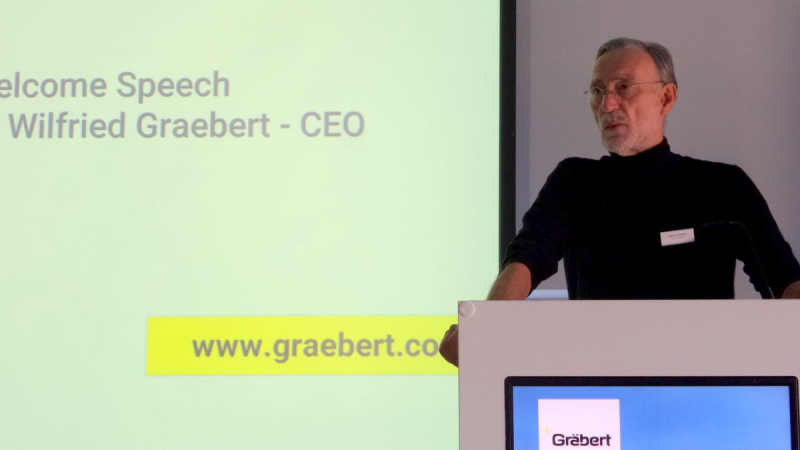 Mr Graebert says that his company is one of the last independent developers of DWG editing technology, and so he wants to help third-party developers secure their future. He adds that a growing number of developers looking for AutoCAD alternatives due to Autodesk's moves. Developers may also be concerned about Hexagon's acquisition of Bricsys.

Two corporations in Japan have more than 500 licenses of ARES Touch for mobile devices, using MDM.

Head of Greabert sales and marketing Cedric Desbordes is now giving us the rundown of software moving to the cloud. His argument is that CAD is becoming a utility like word processing, and that accessing drawings by cloud-mobile is the way to universalize access.

Mr Desbordes says Graebert's competitors are using a 'Winter is Coming' approach, where they think they have to move the whole desktop CAD package to the cloud. The other mistake is that releasing mobile or cloud CAD viewer is a sufficient strategy. Instead, the Graebert solution is both:

One license for all products. 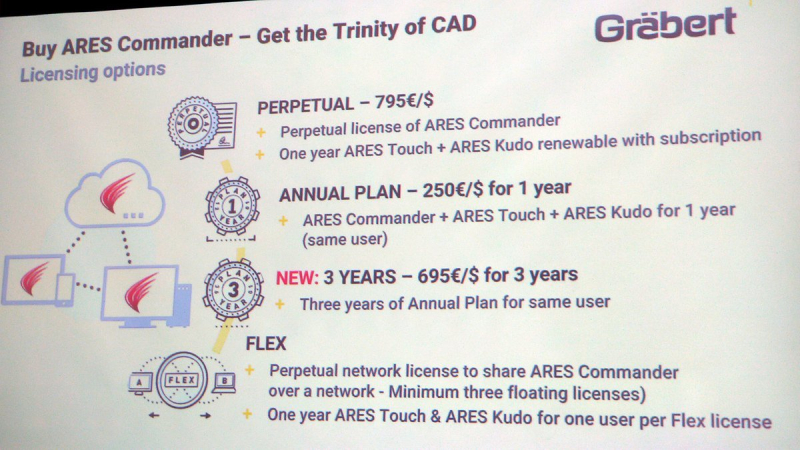 In general, subscription licenses outsell permanent ones 10 to 1, Mr Desbordes says, but some countries are still hardcore permanent licensees (other CAD vendors report that tends to be Japan).

Naturally, there are restrictions beyond the 30-day free use and if you are not on subscription or maintenance. If you are not paying the subscription for Kudo browserCAD, it reverts to viewing, sharing, and measuring -- no editing and no view-only links. Available as of January, stand-alone licenses of Kudo are $199/year. 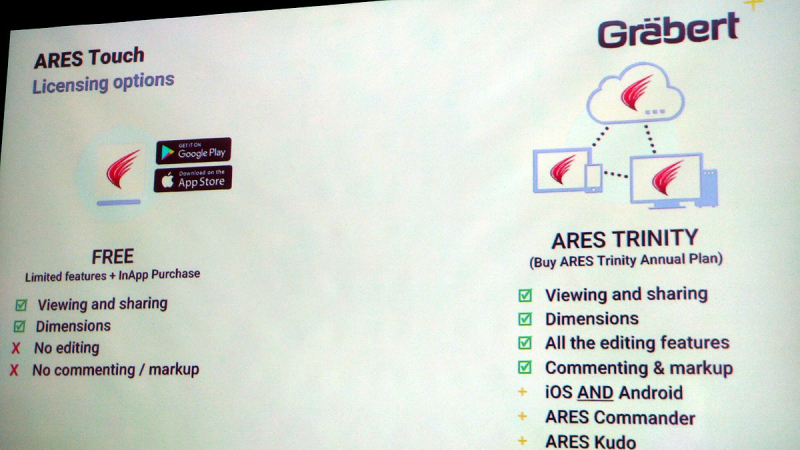 OTOH, one license gives you access to ARES Touch mobile on both Android and iOS, and as many devices as you are signed into (phones and tablets). It is possible to get ARES Touch outside of the Graebert's all-in-one license by buying it through the Android and iOS online app stores. Corel Software's CorelCAD Mobile offers the same thing.

Graebert has integrated the browser-based Kudo program into the desktop ARES Commander program, so that the two work together, such as:

(Apple iDrive is not supported, except on Apple devices, as Apple has no external API for iDrive.)

"We have really worked on this synergy," summarizes Mr Desbordes. "Also, we don't force you to use one particular cloud service."

Graebert's ARES Command 2019 gets a new block editor that creates and edit parametric blocks, tables to define states, complex and simplified states, such as hiding dashed line. These new customizable blocks with parameters and grips are not, however, compatible with AutoCAD's dynamic blocks, probably because Autodesk holds a patent on their version of variable blocks.

The old system for plug-ins would not move to a new computer, and so Graebert wrote a new one with Graebert's account now bound to users, not the device. New plug-ins to be introduced today using new SDK include the following:

The challenge is to handle very large point clouds, where AutoCAD is limited to about 10 million points, says Graebert. The plug-in from UNDET (named after leaf cutter ant, the most powerful animal in the world) supports 100 million points. It accepts data from many scanner brands. 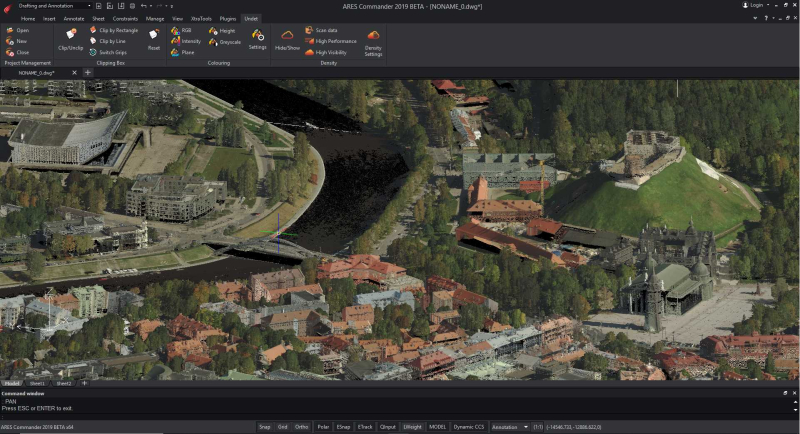 We are seeing it rotate point cloud of 86 million colored points, nearly 2TB (not 2GB) on disk, loads in seconds. (See image above.) It changes colors, both real and fake, like by elevation, clips the points, and has a manager for scan positions. However, it is for ARES Commander desktop Windows 64-bit only.

ARES Commander 2019 will be released by Grabert in the second half of January 2019. You can try the new features in this pre-release version downloadable from:

Graebert is speeding up development through the use of their new plug-in architecture, allowing them to leap-frog some competitors in areas of point clouds, rendering, and mapping. You will find in ARES 2019 many more new features than in earlier years, because for the last five years they spent much energy on getting browserCAD (Kudo) right, in conjunction with Onshape. With the browserCAD problem solved, they can now accelerate base CAD development.

More updates to ARES Commander will arrive via service packs during 2019, including the following:

In fact, Graebert says that more features will come out in service packs than in the main release.

FxARX is the name of the new API, short for "effects." It is compatible with ARx from Autodesk, handles UI, custom entities, hidden line API, and jigs. It is due out with ARES 2019. Also new is the Commenting API, which consists of non-DWG data.

Graebert now offers an Enterprise version of all ARES software, for firms of 100+ employees:

Can disable things like sharing of links and PDF export; can lock user profiles; allow only commenting.

Coming up next is what's going to be new in DraftSight from Dassault Systemes, who's been working with Graebert for ten years now. The two just signed a new agreement to continue the contract where Graebert works on DraftSight for Dassault. No wonder, as Dassault projects two million users of DraftSight by the end of 2018.

DraftSight 2019 will work with Dassault programs, such as:

DraftSight 2019 will have many of the new functions in ARES 2019, plus a new API for third-party development. (Dassault had written its own API for DraftSight, but that's been waylaid now.)

Bigger news is that Dassault will start selling Kudo under their DraftSight brand name. It might be called DraftSight Cloud, but the name is not final. It will be released in beta at Solidworks World in early February. After it is out, Dassault will see how the mobile Touch app fits into their ecosystem.

It's a pretty interesting that Onshape is working deeply with Graebert, as is Dassault.

Coming to Kudo is "CAD Processing as a Service":

Posted at 01:11 AM in Travelogues | Permalink