OK, here we are on day 2 of the Bricsys 2018 London conference and we are just waiting for the BLADE session to begin,

While we wait, here is an overview that I gleaned from yesterday's session for third-party developers:

Why still use LISP?  It has low to zero maintenance, is compatible between releases (unlike C++), no compiler requires (faster development), lots of libraries available, and it good enough probably for 99% of users programming needs.

Here is a picture of the BLADE user interface. 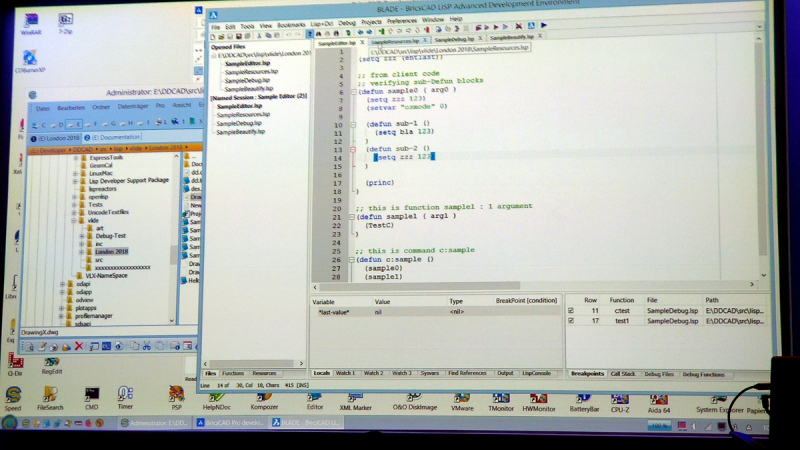 One project can be open at a time, where a project consists of two or more files. A preferences dialog box lets you set up colors and other settings as you wish. You can add your own keywords, and can be highlighted in a different color from regular keywords. Define constants, text scaling factor, and save multiple configurations.

A very nice feature is the side panel that lists the functions used in the current code. Click on a function name, and it is highlighted in the code -- and vice versa. The function names can be sorted in a variety of ways, such as actual order and alphabetical.

BLADE is being updated with each new release of BricsCAD, such as the new syntax and variables check. More on BLADE from https://blog.bricsys.com/inside-bricsys-blade/

On to the next session, "The Future of Drawing," where we are getting some more previews of the next release of BricsCAD V19. First up, linking Excel spreadsheets to tables through data linking. It works only with Excel, alas.

The Dim command has been reworked to do semi-automatic dimensioning. As the cursor passes over geometry, BricsCAD selects the correct style of dimensioning, such as linear for lines and radial for circles.

A formal block editor is added to V19, which is accessed through the BEdit command or by double-clicking a blck.

Tangent and Perpendicular entity snaps controls geometry being stretched, such as resizeing an arc attached to lines.

NearestDimension shows you the distance between two objects: just select two of them. See my tutorial on using it at https://www.worldcadaccess.com/blog/2018/10/bricscad-v19-best-1-nearest-distance-editing.html

Nudge lets you move entities with the arrow keys. The distance moved depends on the zoom level.

Blockify converts individual entities to identical-looking blocks, which helps reduce file size. See my tutorial at https://www.worldcadaccess.com/blog/2018/10/bricscad-v19-2-blockify-conversion.html . It is useful for cleaning up imported STEP files. In one example, the filesize went from 33MB to 3.5MB.

PDF files can be imported as drawing entities.

The manipulator gets a ruler and a protractor, and recognizes snapping. The Repeat option makes multiple copies, while the Copy option makes copies at any angle or distance.

Point clouds can be imported, and entity snaps used with them. A future release will add object recognition.

After the break, the future of mechanical...

The Future of Mechanical

A new module is called BricsCAD Mechanical, which combines BricsCAD Platinum with the old Sheet Metal module. The tease question is "What's wrong with mechanical design?"

The right MCAD software is

Also: be affordable, work without an Internet connection, and have a permanent license.

The backhoe was modeled from scratch in BricsCAD, and moves using parameters. 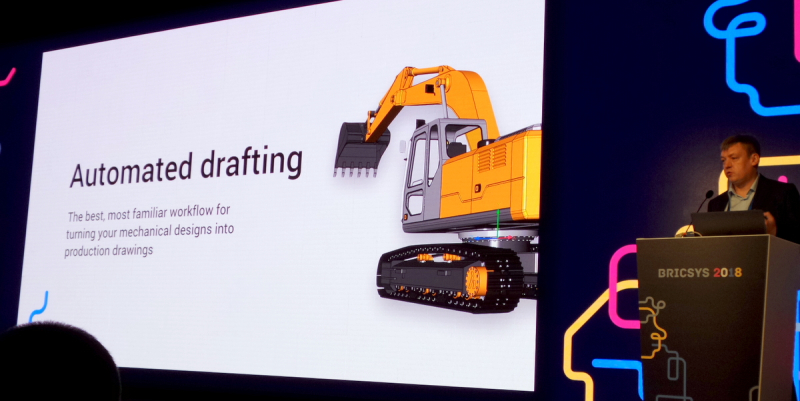 See my Twitter stream at upfrontezine for more on mechanical and sheetmetal.

Posted at 02:06 AM in Travelogues | Permalink