People-free but in a bad way

As I tried to stay out of the 108F-degree heat of Phoenix earlier this week, I figured out why companies like Uber were testing driverless cars in this part of the world. The Phoenix region offers:

A pure driving environment unencumbered by the problems of the real world.

Take a look at the photo I took from the LRT transit stop in downtown Phoenix, at 1:30pm on a Tuesday afternoon, and notice what is missing. People. 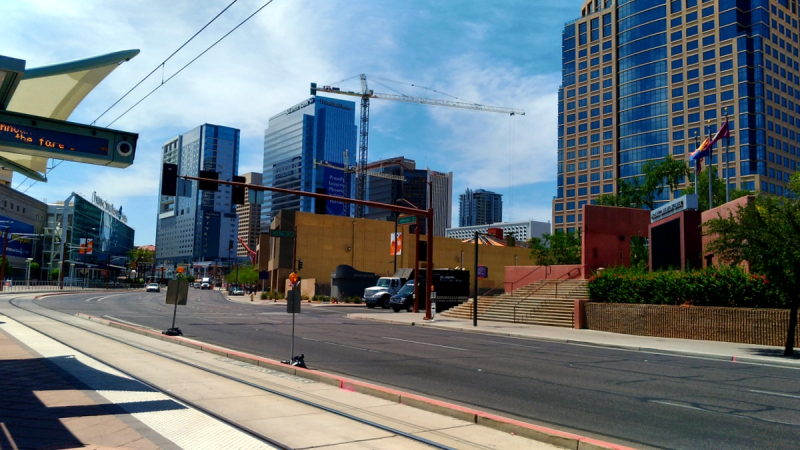 The lack of pedestrians is a benefit to early driver-less car testing, as pedestrians are irrational, in particular by jay-walking, ignoring traffic signals, suddenly reversing their route, and wearing disguises like packages, shopping carts, and large flapping articles of clothing.

The lack of pedestrians is a drawback, as the software doesn't get to learn about them.

During the Siemens PLM Connection Americas 2018 conference, one of the keynote speeches was about a chip from newly-acquired Mentor that handles Level 5 automatic driving (fully independent of humans) but can be throttled back to Levels 4 and 3 (more human intervention needed). In particular, we saw how the system identifies pedestrians. This was supposed to be happy news from the keynote stage, and so the recent killing of a pedestrian by an Uber-operated autonomous Volvo wasn't mentioned.

By coincidence, Roopinder Tara yesterday summarized the details of the death, as determined by the US's National Transportation Safety Board. Read the article at https://www.engineering.com/Hardware/ArticleID/17054/Ubers-Self-Driving-Car-Had-6-Seconds-to-Respond-Before-Fatal-Crash-But-Got-Confused-Did-Nothing.aspx, although the headline says it all:

Uber’s Self-Driving Car Had 6 Seconds to Respond Before Fatal Crash, But Got Confused, Did Nothing

In brief, the Uber software could be set to Smooth (ignore objects in order to brake and swerve less) or Safe (avoid or stop for things that might not be a problem.) In this case, it was set to Smooth, and so ignored the bicycle-camouflaged jaywalker.

Software that performs semi- and fully-autonomous driving has been killing drivers as well, and most often by Tesla cars whose ceo has been championing the fight against AI that could kill us all.

Posted at 11:19 AM in Behind the Story | Permalink