For Canon, Nikon, and Sony DSLRs

I tend to ignore pleas from Kickstarter, but over the years two pleas did catch my fancy. One was the latest release from the makers of Myst, even though the new game took something like two years to deliver.

The other was more recent, a remote camera controller for DSLR [digital single lens reflex] cameras. It promised a host of functions, which you set from your smartphone, which then passes the commands to the camera through an attached controller. It was only $99 for an early supporter, so why not!

Unlike some other hardware startups on Kickstarter, this one actually shipped and arrived last week. It didn't work, but a firmware update is due soon, so we'll see.

What The Aurga Consists Of

It comes in four parts. (Very little of this explained on the company's Web site, so this can act as a user manual for you.) 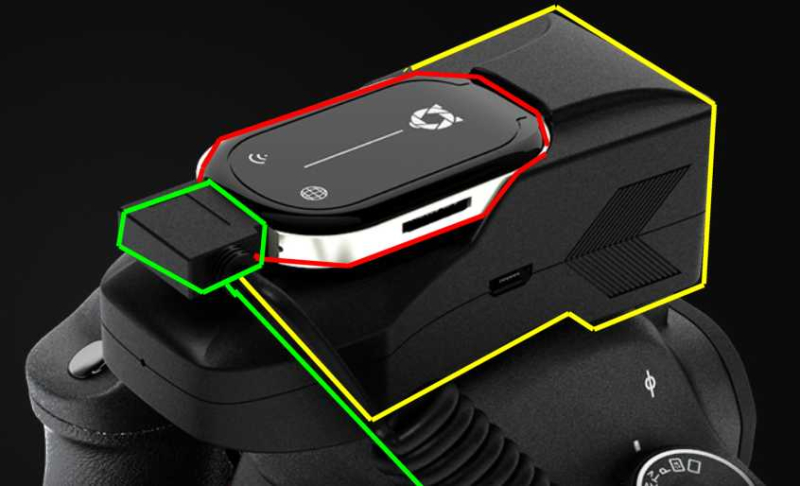 Yellow (Battery): This largish black plastic part is basically the battery. It has a microUSB port in the side for charging, a red button on the back for turning it on and off, and four LEDS that report the battery level.

Underneath it has a hot shoe attachment for mounting on the camera's hot shoe, and on top a USB-A port for plugging in the controller.

Red (Controller): The main part is the controller, in silver and black. It plugs into the battery's USB-A port. It has a WiFi antenna for connecting with your smartphone, as well as the electronics for special effects.

On the side, there is a microSD slot for memory cards up to 256GB, and at the front a second USB-A port for connecting the USB cable. Photos can be stored on the camera, as usual, or on the memory card.

It actually has two LEDs that light up, one next to the WiFi logo, a second next to the globe logo. Aurga provides no explanation for the Globe LED; I wonder if it is meant for connecting to the Internet, so that the camera can be operated really remotely?

Green (USB Connection): The USB cable is for controlling the camera. One end connects to the controller, the other end to the camera's USB port.

This cable is included, but it was the wrong kind for me: Aurga supplied a microUSB cable, but my DSLR uses the older miniUSB connector.

The 4th part is the app running on your smartphone, as described later.

In summary, you use the smartphone to tell the camera what to do:

I suppose you could use any 5v power source with a USB-A connector, should the included device run low. In fact, the Aurga does not even need to be mounted on the camera; it only needs to be connected to the camera by a USB cable.

Here is the process to set it up:

The kinds of functions the controller can handle depend on the camera model. For instance, my Nikon D3100 apparently does not support live view in the smartphone, something the Aurga Web site does not state. (I say "apparently" because I haven't got the system working; I learned this from Aurga tech support.)

Here is what Aurga is supposed to do:

Much to my disappointment, Aurga isn't working for me. The smartphone is not making the connection with the camera, even after I tried the Aurga app with on different smartphone models with four different releases of Android.

I am working with tech support, and I will update this blog if the device does work.

BTW, this is not the first remote assistant. Shutterbug describes Arsenal at https://www.shutterbug.com/content/arsenal-new-“intelligent-camera-assistant-promises-help-you-take-perfect-photo.

Posted at 01:23 AM in Digital Photography | Permalink