What apps are on my Android this year

I am a strong advocate of not upgrading software, unless it has to do with security patches or significant improvements that benefit me. In the Google store app on my Android, I have auto-update turned off, and so I have 48 apps waiting with updates. They can continue to wait.

A decade after the iPhone launched the full-screen touch-with-finger paradigm, the app market is mature. Most apps do what we need them to do. There rarely are breakthrough apps anymore. I am more likely to get a new phone than a new app.

But once in a while, I hear about a new app that sounds interesting (and then end up not using it most times anyhow), or I get frustrated with the capabilities of an existing one and so go searching for a better replacement (which is not easy).

The biggest change I made in the last year was to replace the K-9 email app with AquaMail. The new one has a nicer interface and this killer feature: when attaching a picture to an email, AcquaMail asks how small you want to make it -- so no need to resize before attaching it. Another nice function: swipe to hide messages but keep them on the server. This declutters the list of emails on the phone without erasing them unnecessarily.

The drawback: AcquaMail has a ton of options. It took me months to find the option to automatically BCC: to self. (From AquaMail support: "This is a per-account option, so long press your account, choose Options and Folders, then Extended mode, finally scroll down to see it.") Even that Swipe-to-Hide function took me a while to discover and implement.

Here are the primary apps I'm using these days. Remember to pay developers. App prices are cheap, and programmers need the income.

Home screen and launcher: KK Launcher, but I use an old one that is no longer available (another reason to not update). My most-used apps are on the home screen, with lesser used ones on the left and right screens. 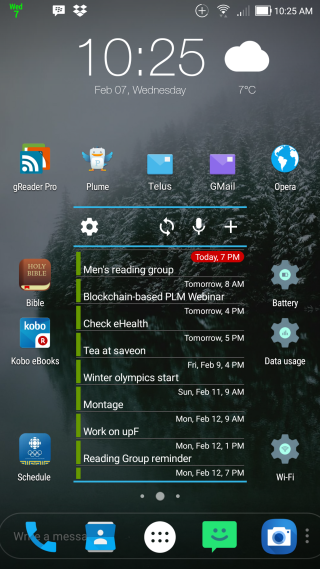 Home screen with Tasks To Do dominating; background image by my daughter, professional photographer Katrina Grabowski

Texting -- ChompSMS (allows me to send cell phone texts at a future date and time) plus WhatsApp, Instagram, and BlackBerry Messenger to be compatible with my kids

Music player -- Neutron (the best sound of any music player, but horrible interface) 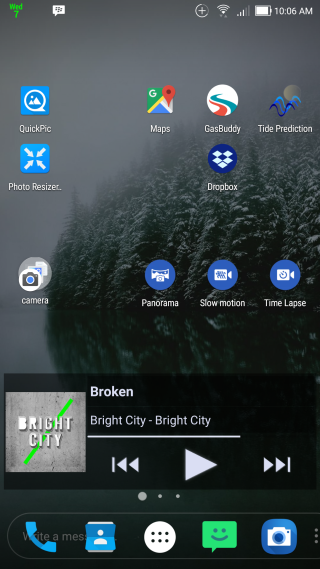 Movie player -- MX Player Pro (love that I can change the brightness, volume, and place in the movie just by dragging on the screen)

Office documents -- OfficeSuite (to avoid using Google as much as possible). The exception is Google Sheets, because OfficeSuite's spreadsheet doesn't zoom properly on small screens.

Travel -- apps from each airline I commonly fly with and railroad I travel on; I especially like that United's app now reports the location of checked bags.

Date in Status Bar -- does what it says, but does not work on all Android devices

My Data Manager -- tells me how much of my monthly cell data plan I've used; priceless! In the figure below, the (very short) dark blue bar tells me how much I've used so far in this month's cycle; the lighter blue shows how much I could have used, based on dividing the monthly 500MB allowance by 30 days. 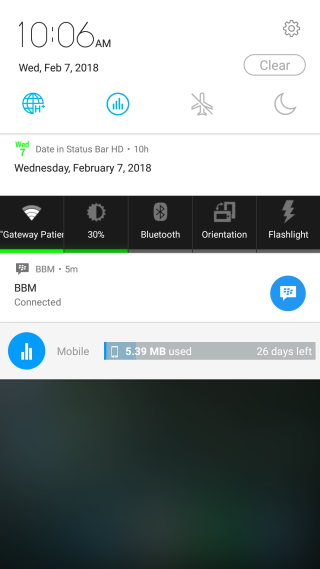 Notification bar with customized Widgetsoid (in black), and My Data Manager; the blue and gray buttons are from ASUS

Wigetsoid -- to add the most-used functions to the notification bar, such as 10/30/100% brightness, flashlight, and orientation

MCW -- to display the monthly calendar as a widget 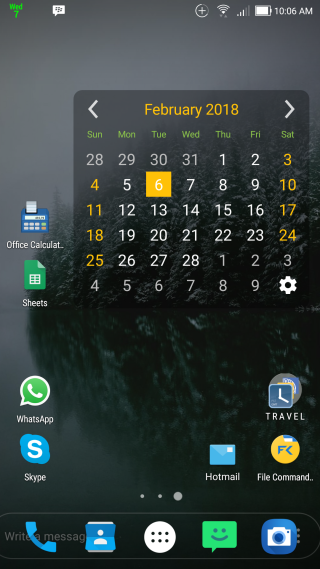 MCW (monthly calendar widget) dominates the right screen; all travel apps are in a folder

In rare cases, I revert to the apps native to the phone. My current phone is the ASUS ZenFone 3 Zoom, an unsung phone if there ever was one. (It has a 5000mAHr battery, 2.3x optical zoom, screen grabs jsut by holding down the Recents button, etc.) I reverted to using its apps for Camera, Contacts, and Phone, as ASUS beefed them up to be good enough for my needs.

When out of country, I  put $5 on Skype to phone home for cheap.