Reflection: What are Drawings?

Construction of the Babel tower was stopped due to the fact that builders ceased to understand each other.

Any collaboration is based on understanding, but it is better to clarify what it is. I think that understanding is the image (or model) of the object in the human's head.

I also think that the drawings are the most simple, universal, and reliable means to build an object image in human mind.

Drawings have many disadvantages and one unique advantage. Drawings are the only way to write the history (or algorithm) of understanding. Having read this history from start to finish, we will have exhaustive presentation of construction object.

There are two ways of understanding complicated objects and correspondingly two approaches to create drawings.

Previously, the second approach was considered a sign of professional immaturity; unfortunately, it dominates currently due to the wrong concept about the "automatic" drawing extraction from a model.

There is a very true statement made by the famous architect that Drawings are the soul of architecture. Degradation of the ability to make drawings leads to engineering degradation.

I think that the next generation 2D editor will help to correct situation. New editors will operate with standard high-level objects and have the built-in tools for 3D interpretation. Most importantly, it will teach builders to make "right" drawings.

Step-by-step detailing technique (or top-down design) is a way to operate under conditions of uncertainty, i.e. under ordinary conditions of actual design. Essence of method is as follows.

At the initial stage, when uncertainty is high, the designer deals with objects of a high level of abstraction. During the next stage, the scope of knowledge increases – objects are detailed. Then there comes detailing of details. At the final stage, the level of object detail should be sufficient to ensure its construction.

Step-by-step detailing method lies at the heart of traditional designing. Starting from the second version, 3D interpreter software is able to process working drawings made using this technique.

Let consider the method operation using the example of designing a pile foundation for a small cottage.

It is necessary to add two layers: "Marks of elements" and "Marks of views" to the list of layers for interpreted objects. (See Figure 1.) 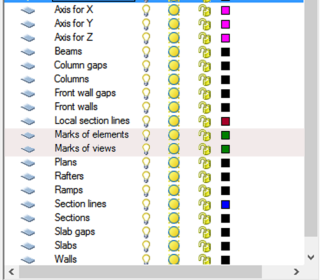 Fig. 2 illustrates the scheme of the cottage pilings, while Fig. 3 shows a section across the piling. 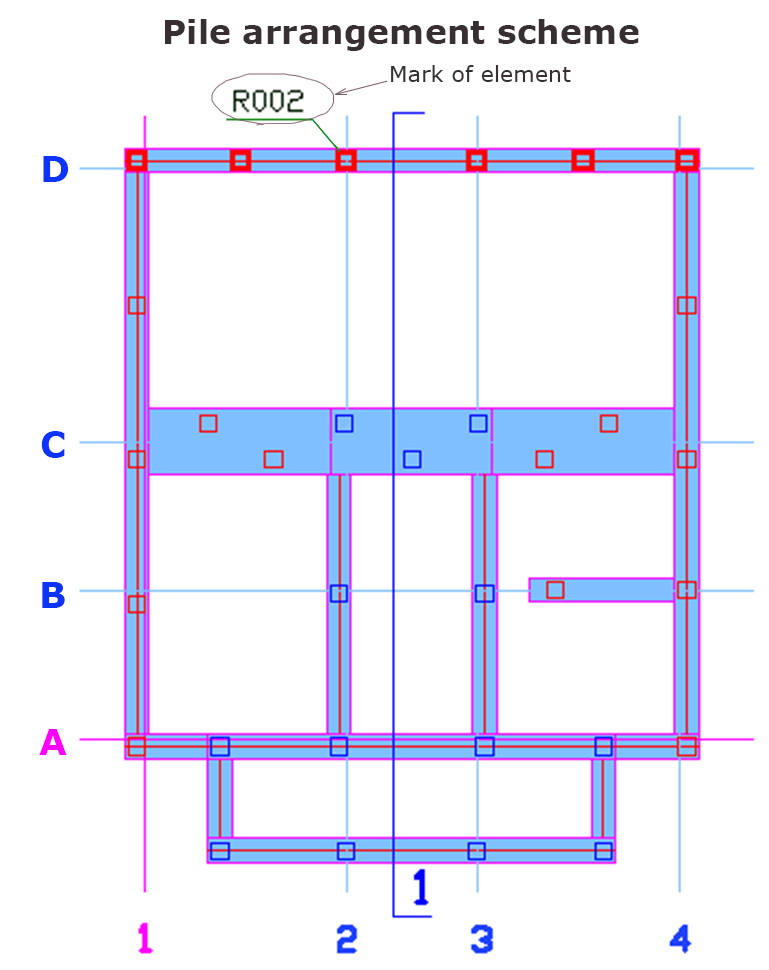 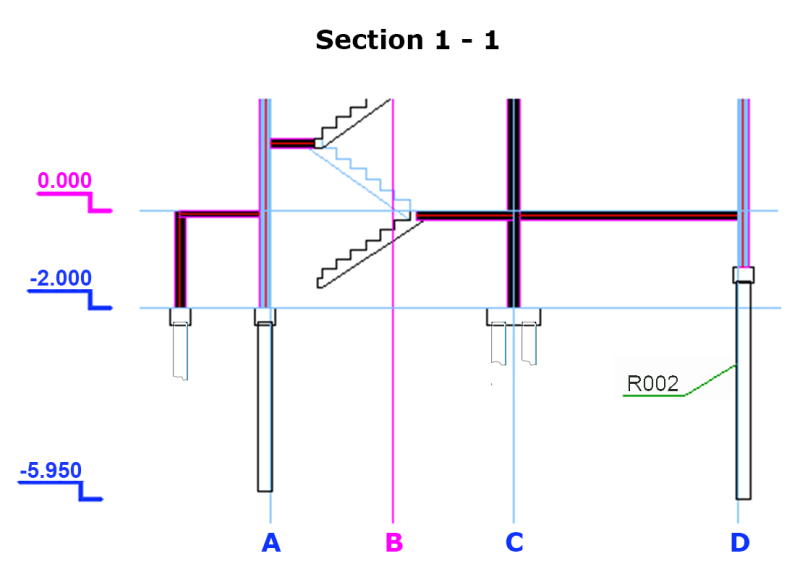 At the initial stage, there is no accurate information about piles, so Fig. 1 shows abstract piles with the same square cross-section.

Let us suppose that the designer got clarifying information for piles located along D-D. Let's highlight these piles on the scheme attributing them the same line weight and mark one piles. Thus, R002 mark will be attributed to the piles along D-D section.

Now, it is necessary to work out a separate projection of R002 typical pile. In fact, projects of objects at different detailing levels do not differ from each other. The tools used are the same: primary views (plans), additional views (global and local sections), coordination axes, section lines, structural elements. Fig. 4 illustrates the projection of R002 typical pile including circular-section formwork and pile reinforcement. Now, it is possible to run the 3D interpreter and see the result. (See Figure 5.) 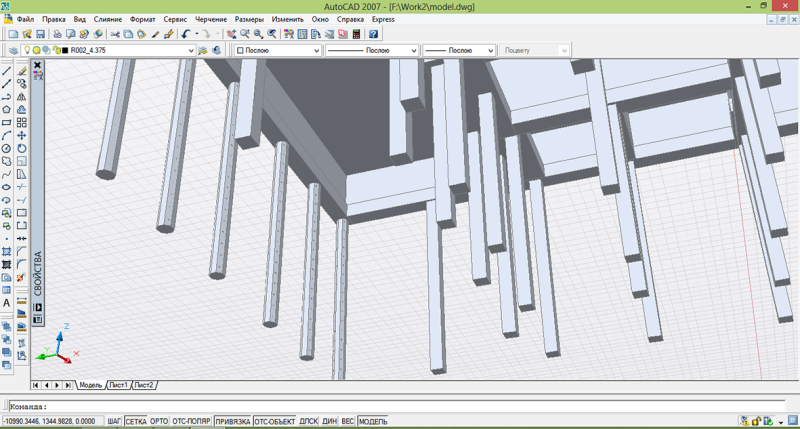 Fig. 5. Pile basis model with round piles along D-D section 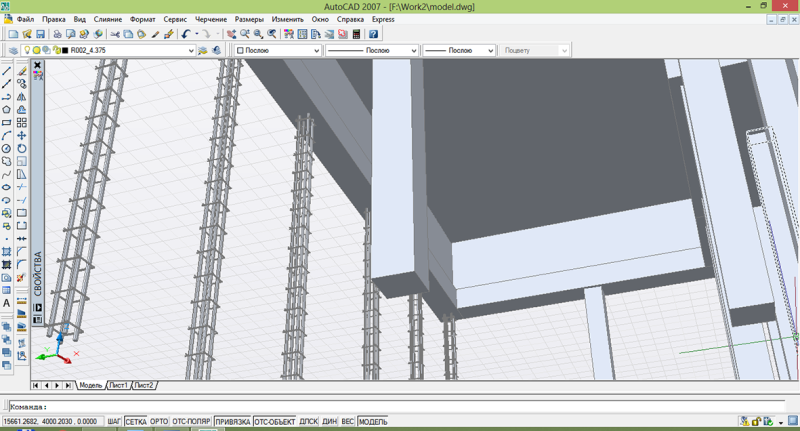 Connectors in structure nodes are designed similarly, for example, in places where rafter joists rest on the support frame. (See Figure 7.) 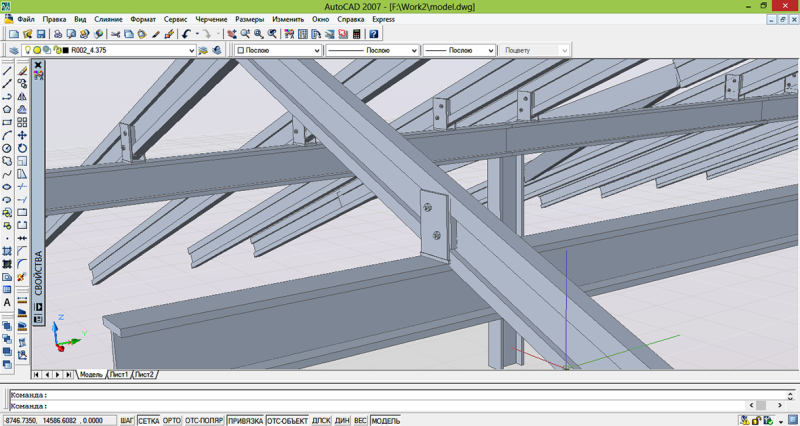 It is possible to detail any object at any design stage. The depth of detail is limited only by the PC computational performance.

Test limited version 2.0 of the 3D interpreter may be downloaded by visiting http://3d-int.ru (Google Translate version in English: https://translate.google.com/translate?sl=ru&tl=en&js=y&prev=_t&hl=en&ie=UTF-8&u=http%3A%2F%2F3d-int.ru%2F&edit-text=&act=url)

Posted at 01:39 AM in Computer-aided Design: TIPS | Permalink