Bricsys likes holding its annual user conference in a different city every year. In the past we've been to places like Brussels, Barcelona, and Munich. This year, the event is being held near the center of Paris. I know, because the price of a Caesar salad at the adorable, tiny French restaurant is $22 or so.

Day 1 is the developer conference, and so we are hearing about items of interest for third-party developers, less so for users. (Tomorrow is the user conference.) Here are some of my notes of what is being said: 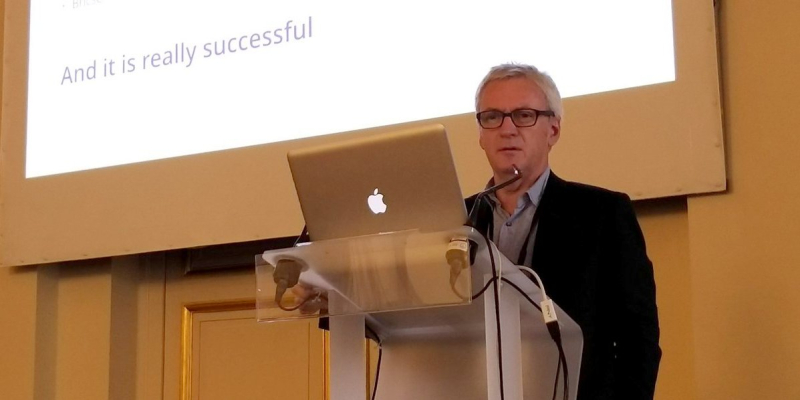 Bricsys CEO Eric de Keyser held the keynote and emphasized the Bricsys eco-system. He noted that it went well to be an Autodesk third-party developer for two decades. But Bricsys offered insurance, in case something would happen to Autodesk. People thought Bricsys was too small to survive, but it is still here, today a credible platform after 15 years.

He first thought that offering a good API was sufficient. But then Autodesk became a competitor to their own partners by buying up the best several, becoming a competitor to the others. "Are you ever invited to be a developer on Autodesk's cloud? I don't think so," Mr de Keyser asked rhetorically.

De Keyser argued that Bricsys offers a community that competes on all levels with the big giant.

He said that Autodesk has an old interface as a result of 30 years of development, and so there are hundreds of settings, some of which are set just once. Bricsys says it can replace many settings and dialog boxes through its smart Quad interface (their unique at-cursor control). He hinted at a new software program, to be introduced tomorrow, that would eliminate the need for many settings through AI.

"BIM is there is stay," he declared. The $100-million question is, however, how to get everyone using BIM. IFC is not the best technology but it is a standard, and so it has to be used for model and data transfer. The good news is that BricsCAD BIM is certified for IFC imports and exports; as well, the new Civil program supports IFCs.

Bricsys 24/7 is the new name for Chapoo, and can be a model server. You can use Dropbox but it is just for storage; compare with what we do with collaboration.

The App store on the Bricsys Web site is free for third-party developers. Tip: resellers can find add-ons here that might be useful for customers. Views have more than doubled over last year.

BricsCAD Solution Build is the full version of BricsCAD for OEMS. It features a customizable installer, silent activation, new versions of BricsCAD do not affect the add-on. Windows only for now but will be available for MacOS and Linux. Can choose when to upgrade, no forced upgrades. All languages keys. Pricing same as native BricsCAD for end users, but developer gets 20% discount.

Bricsys is introducing a new level of third-party developers: Titanium. At this level, you get mentions on the Bricsys corporate blog, mentions in Bricsys marketing, VIP access to conference such as application booths, get boosted in the Bricsys App store, and be part of in-product promotion inside Bricsys.

To become a Titanium developer, see the list in the slide in the figure above. As always, membership in the Bricsys partner program is free, even at the Titanium level.

[Disclosure: Bricsys contributed towards my transportation, accommodation, and some meals.]

Posted at 06:20 AM in Travelogues | Permalink

In the 2D world, AutoCAD user interface are deeply entrenched amongst users and features like dynamic blocks are certainly used in larger projects.
It will be nice, if the default BricsCAD User Interface programmed not to infringe any copyrights, to have a customisable interface to program Dialogue boxes.
The editing of blocks in external and nested reference files with familiar Dialogue interface is a commonly used feature too.