Day 2 of the Teigha conference traditionally has been for 1-on-1 meetings, where members can meet with ODA programmers. This year, we have a spillover, however. Several vendors are holding side conferences to talk technically about their software: C3D Labs, LEDAS, and Visual Solutions.

C3D Labs offers a 3D modeling kernel to ODA members at a reduced price. This is, in fact, the third solid modeling kernel available to ODA members. The ODA has one it developed on its own, a free stop-gap that is good enough for simple 3D modeling, but not good enough for real 3D. Second option is to license ACIS from Dassault Spatial, but it is rumoured to be expensive, partly because the license involves royalties. I don't know. 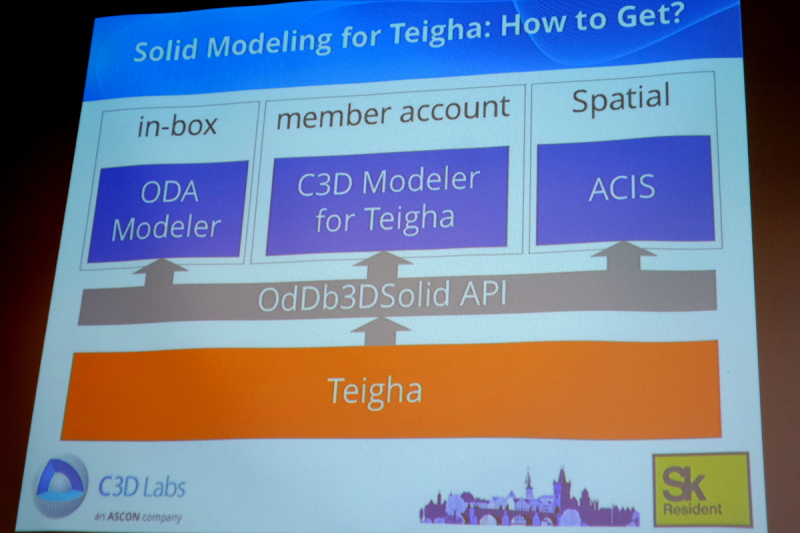 The third option arrived recently is from C3D Labs of Russia. Their license involves no royalties, and is free for evaluation and educational use. A one-time fee costs $1,000 for non-profits, $5000 for commercial use, and a few other price levels. See figure below. If the price seems high, but apparently is low compared to competitors and considering that updates are delivered every four weeks. 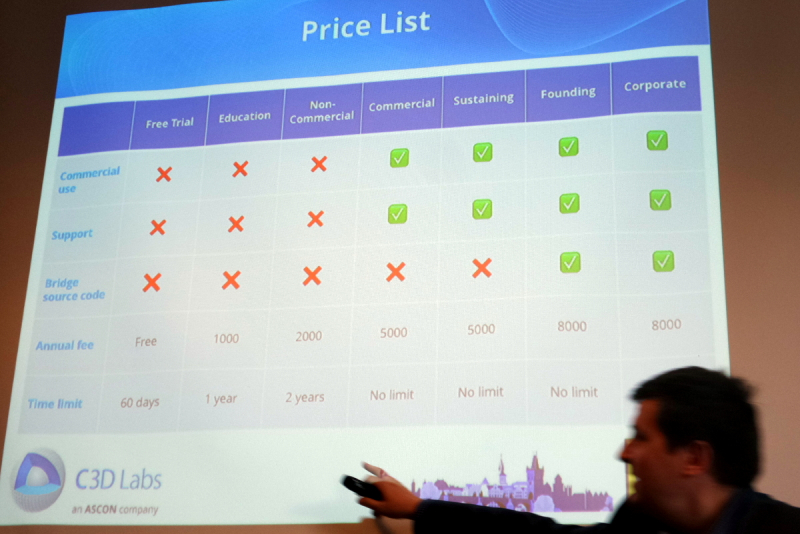 C3D Labs touts how easy it is to get the license: go to the ODA Web site and add it to your shopping basket. Pay, then download.

Note that the ODA version is different from the standard C3D modeler, which we will hear about later this morning. The company also has a converter (translator) and a solver (constraints) which are not available through Teigha, but could be, if customers demand.

As a reminder, 3D solids are mathematically represented by b-rep, short for boundary representation. This represents 3D solids by their surfaces (the part we see), also known as the boundary -- and their insides, which we don't see. The C3D modeler sees the boundary as a series of faces, as illustrated below. 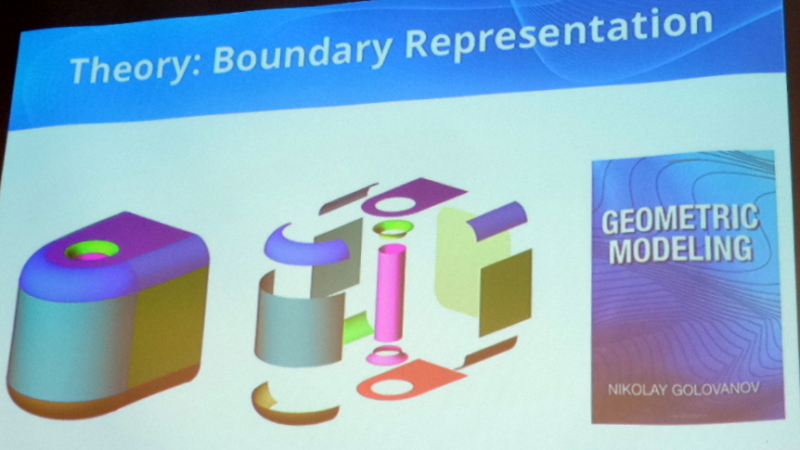 Nikolay Golovanov was instrumental in writing the C3D kernel for KOMPAS-3D some 20 years ago. More recently, the kernel was spun off as a subsidiary company, C3D Labs, whose job is to market and commercialize the software. His thinking on 3D kernels was collected in the book, Geometric Modeling.

One of C3D Labs' customers is here at the ODA conference. MKA Software and Engineering Solutions is from Turkey, and their software generates drawings for steel, one-story buildings. I say "generate" because the user enters parameters, such as area and roof style, and the software generates all of the drawings. The crucial part in steel design are the details of the connections between beams and columns. 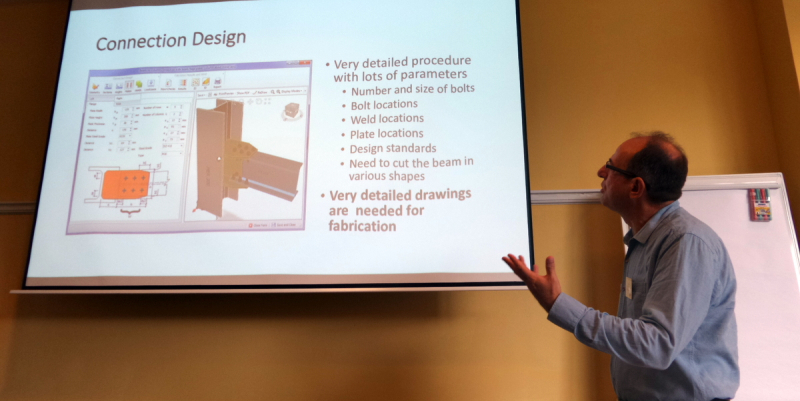 This firm used the Open Cascade kernel, but found it was not very fast. They tried a number of other options, but then as new members of the ODA, they decided to switch to C3D Labs. It is so new, it is still under development, and so we didn't get to see a demo.

C3D Modeler for Teigha consists only of the modeler and some of the translator. Missing are constraints, rendering, and the full translation unit. See the figure below for the full list of differences: 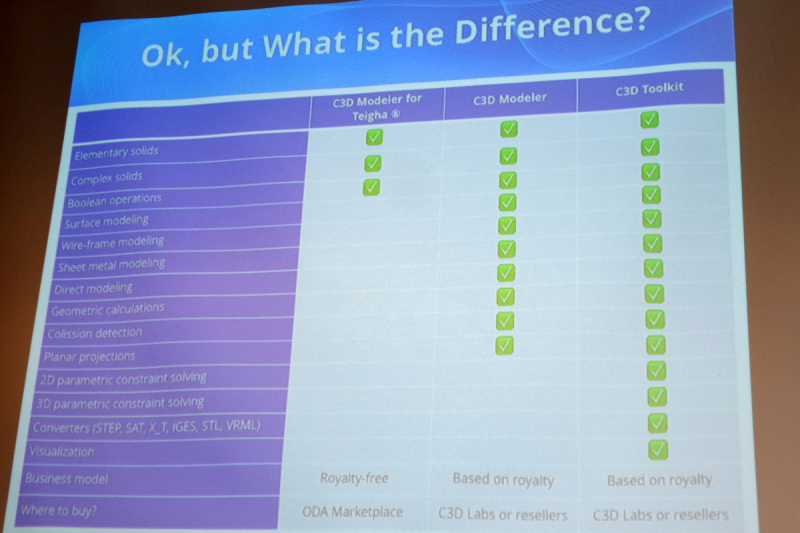 It runs on all operating systems, including Android and iOS. The API is open for customers to build on top of C3D.

Another software firm using C3D is LEDAS of Russia. They are a developer, so use C3D to develop software for other CAD firms. Their most prominent customer is Dassault Systemes, for whom they worked 12 years.

Today, we are hearing from Nikolay Syntnikov, coo of Ledas. He is describing some of the projects that they are currently involved in. One is for a new CAD program meant for use in Asia, backed by a large investor. He could not name it, as the software is still under development. But the slide below shows some of the parameters of the project. 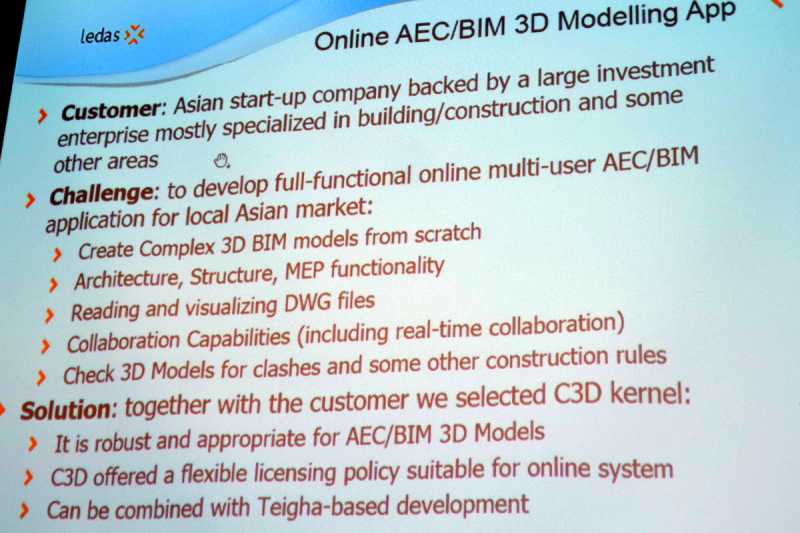 Also big announcement here is the new LEDAS Cloud Platform, still being developed. It is meant for customers who are loathe to store their drawings on servers hosted by the likes of Autodesk or Onshape. They hope to ship LCP in a couple of months.

[Press F5 to refresh this page.]

[Disclosure: ODA paid for my airfare, hotel, and some meals.]

Posted at 12:38 AM in Travelogues | Permalink